All Articles Premiere
A Practical Look at Color Correction in Premiere Pro CS6
Clay Asbury on Fri, April 19th 0 comments
Language
Shooting video for tv, film, commercials or pleasure? Whatever the purpose it's important to get to grips with color correction in Adobe Premiere Pro. Clay Asbury runs through a practical guide.

I color correct everything. The reason is that almost all the shows & commercials you see on TV have color correction done, usually by separate people who specialize in color grading. Even if you are wearing multiple hats, spending a little time on color correction will make your work look better.

In this article we take a practical look at color correcting a shot with a color cast.

We will look at fixing white balance, using scopes, setting levels and saturation.

I filmed a live performance for my friend's band, and the footage was dark and red. I was shooting with a DSLR in auto balance, and it tends to be overly warm indoors. Unfortunately, I didn't have time to pre-white balance as it was a run and gun situation.

I generally use a white balance disk to set the white balance, but this was one of those situations where you just have to make the best of it. The more you can get the image correct in camera, the better (as the saying goes, 'garbage in, garbage out'). If you are filming with a video camera, white balance with a piece of white paper.

Select the clip in the sequence, and in the effects panel type fast, which brings up the Fast Color Corrector. Double-click on the effect to apply it to the selected clip. This is a welcome feature in CS 6 as in previous versions you had to drag the effect onto the clip. 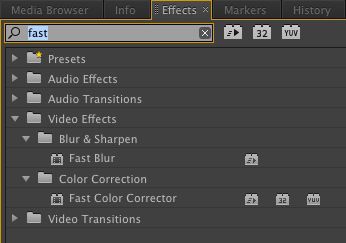 Double-click on the clip to load it in into the Source Window, and click on the 'Effects' Panel to reveal the fast color effect. Select the Eyedropper and click on an area that should be white.

In my case, I clicked on a white sign behind the singer (has a red/orange cast). Immediately the shot looks more natural. So what did clicking the eyedropper do? It made the area we clicked on white by moving towards Blue, and removing the color cast. As you move towards the Complimentary Color (the Color opposite on the Color Wheel), the color cast is removed.  Drag the white circle around so you can see how this works. 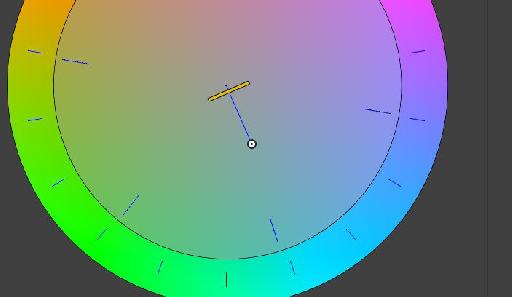 To compare the before and after, check the 'Show Split View' option (I prefer the Vertical Split).

You can also click on the 'fx' beside Fast Color Corrector to toggle the effect on and off. 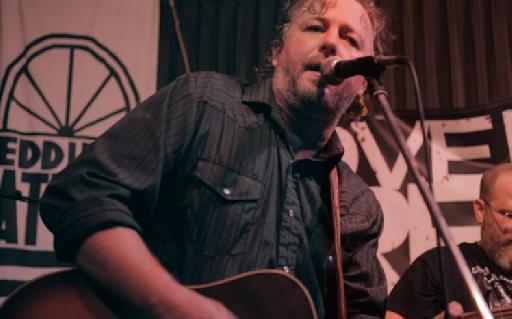 Let's say you have more time for a proper color correction. What I mean by proper is there is an 'Order of Operation'. We will adjust the brightness levels (luminance) before working on the color. Reset the Fast Color Corrector by clicking the reset arrow. Then select the Color Correction Workspace. Window > Workspace > Color Correction.

This moves your windows around, with the 'Effects Controls' at the top left and a Reference Monitor on the bottom right. Click on the wrench icon in the Reference Monitor, and select 'YC Waveform'. 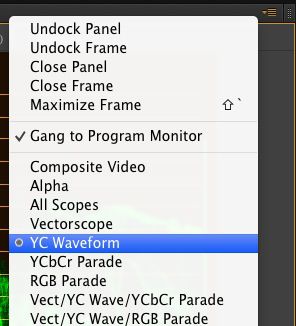 The Waveform shows you brightness from 0-100 and you want to avoid going over 100 if your work will be broadcast. (You may have heard this mentioned as being broadcast safe). We can apply the 'Broadcast Colors' Effect after the 'Fast Color Corrector' to keep our signal legal. 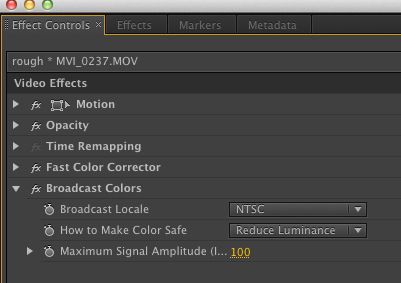 Let's talk about how to read the Waveform. The Green signal is called the trace, and it represents the brightness of the image. The Trace is an overlay of the image. If you look at the far left of the Waveform the Trace is at 60, which is the white on the sign behind the singer. Caucasian Skin tones are generally around 65-70, and they are below 60 here. So the image is underexposed, and we will use 'Input Levels' to fix this. 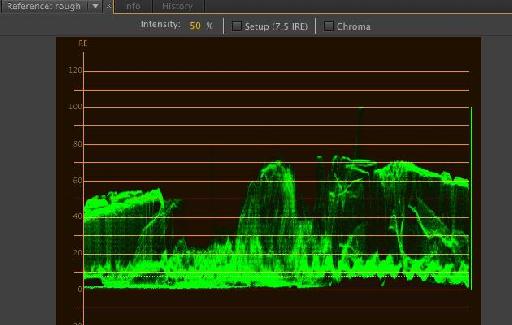 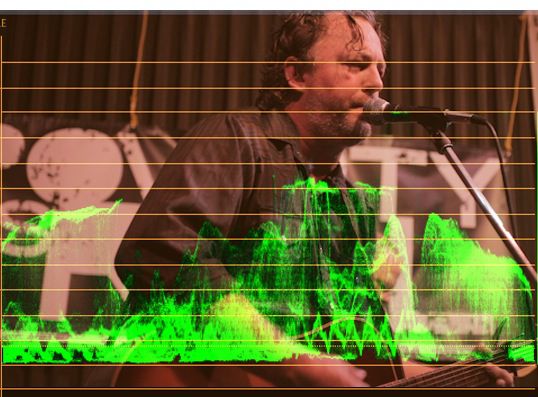 Under 'Input Levels' I moved the white slider to the left until the brightest part was around 95, and moved the midtones slider (gray slider, often called gamma) to the right until I could see detail in the singers face.

Now we can switch to the RGB Parade Scope by clicking on the wrench again and selecting 'RGB Parade'. The Parade Scope shows the amount of Red, Green, & Blue, and is helpful for seeing the color cast. 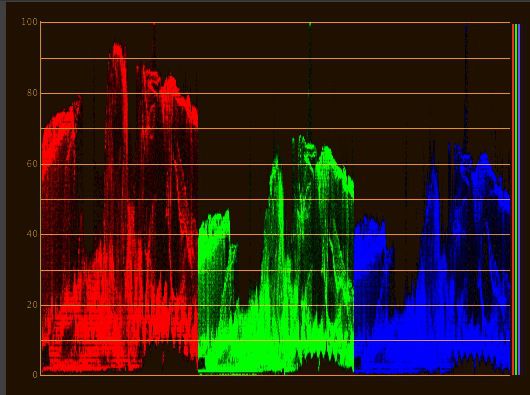 We can see by the amount of Red there is a strong red cast. Select the Eyedropper and click on an area that should be white, the color wheel moves toward Blue and the RGB Parade is more balanced now. 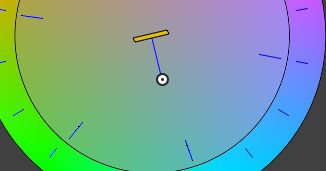 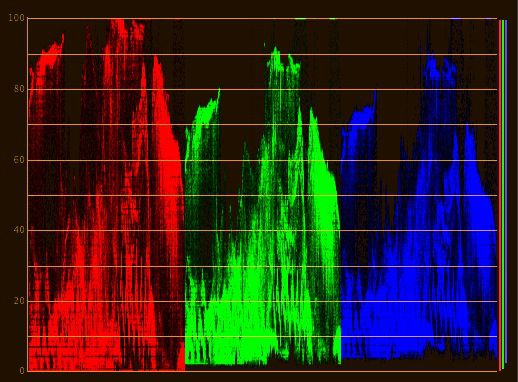 To Adjust the Saturation, we need to bring up the Vectorscope (click on the wrench again and select 'Vectorscope' ). The Vectorscope is a circle with squares for Yellow, Red, Magenta, Blue, Cyan, & Green. The amount of Trace indicates Saturation. Decrease the Saturation by dragging the amount from 100 to 50 and the trace amount gets smaller. (If you go 0% the trace becomes a Green dot and the image is B & W)

Generally the trace shouldn't extend beyond the color boxes as it will be over saturated. 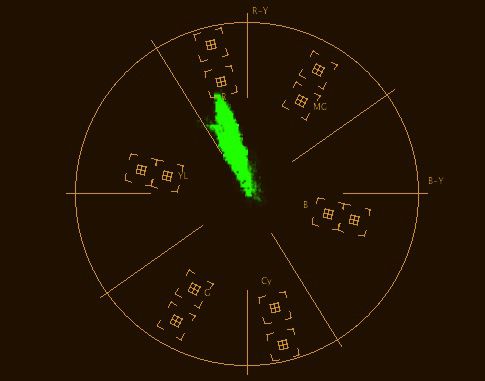 The line between the Yellow & Red squares indicates where skin tones should be.

The skin looks a little Red to me, so we can move the Trace closer to the line by slightly moving the the White Dot in the Color Wheel toward the left. We have to be careful though, as we can introduce a green cast if we drag too far. In this case since we need more control, we could use the 'Three-Way Color Corrector'.

The 'Three-Way Color Corrector' gives you an eyedropper for Black, Midtones, & Whites.

I recommend using black, gray & white balance cards when you film to make this process easier. Record a a couple seconds of video with the cards in the frame. Then when you go to color correct, you can click on the cards in the scene, instead of having to guess what is black, gray, and white. 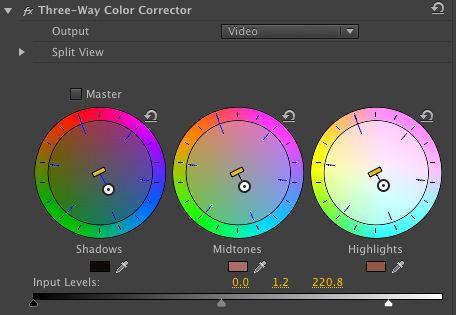 I hope this Practical look at Color Correction was helpful, and gives you ideas on how to improve your own footage. Below is a link to the Adobe Help if you would like to read more on this subject.