All Articles Synths & Sound Design
A Synth With No Presets: Experiencing The Joys of The Korg Arp Odyssey
Jade Wii on Mon, March 6th 0 comments
Language
Working without a preset system can help you to learn the controls of your instrument in a particularly deep and intuitive way. Here, we look at the Korg Arp Odyssey.

With all the commotion around the new Korg Arp Odyssey module and the upcoming Korg Arp Odyssey FS, I felt it necessary to talk about my experience with my Arp. I have the previously released version, the one with slim keys, in voguish white. At first glance this piece of machinery can be intimidating, but once explored it will become an essential piece in your home studio.  I for one hate scrolling through presets; trying to find a sound that fits in my mix sometimes takes away from my creative process. I was pleased to find that all that is bewildered with the instant gratification of the Korg Arp Odyssey. I am often faced with the question of how I cope with not being able to recall my engineered sounds. The answer is simple: repetition and practice.

Having an instrument with no presets forces you to learn what it takes to create a useable patch that is pleasant to the ears, and with practice, one can remake that patch over and over again. By learning your instrument in and out, not only do you learn about synthesis, but you also discover the distinct sounds that will make your music distinguishably yours. 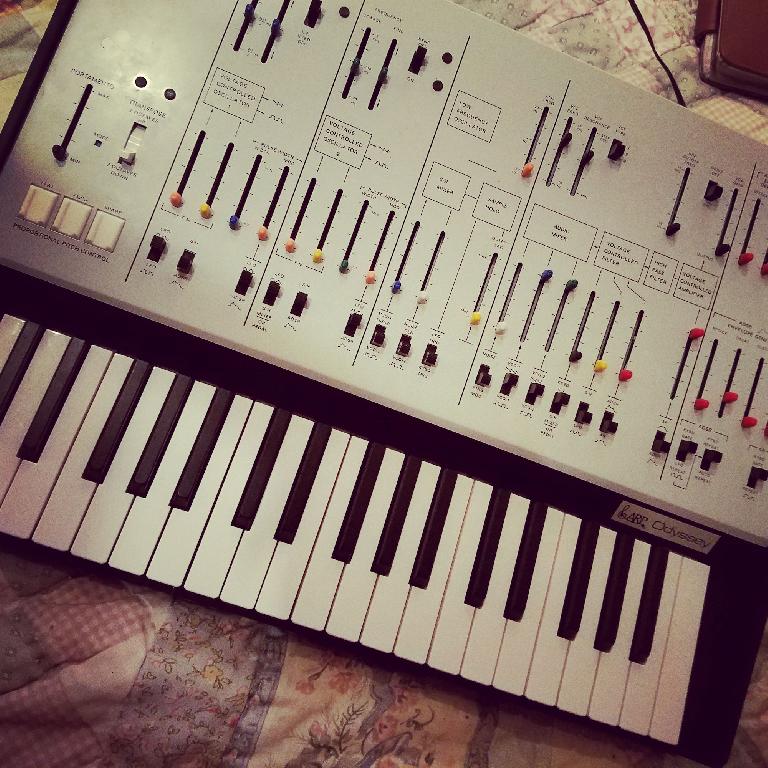 The Arp Odyssey has two waveforms, sawtooth and square but it also has the ability to simulate a sine wave by canceling both waveforms. This can be done by raising the VCF resonance and lowering the VCF frequency: when you’re doing this make sure KYBD CV is activated and increase the value. By doing so the self-oscillating filter will follow the note being played. The oscillator pulse width can also be adjusted to give waveform variations.

The envelopes on the Arp are exceptional and they can be switched to affect pitch on the oscillators. This can be a good thing because if tuning by ear isn’t your forte it will soon become an acquired skill. If you use sync and envelopes tied to pitch on oscillator 2, you can get a hard sync sweep like in the song “Let’s Go” by Cars. The envelopes can also be used to affect filter levels, and are used by default for amplitude, which is the volume of sound during key press. The repeat switches on the right are simply an LFO retriggering the note selected and yes, they re-invoke the envelope on each repeated note. You can set it to only repeat while a single key is held down, or to repeat indefinitely even when the key is released. Think of the bass line for Vangelis, “Chariots of Fire”, one note repeated for a fair while. 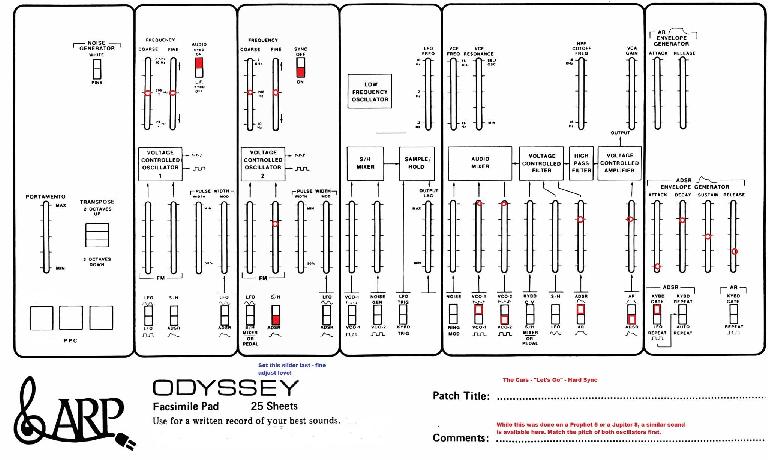 Let’s talk about the filters on the Korg Arp Odyssey. The Low Pass Filter (LPF) lets everything in the signal pass below a specific frequency and can remove higher frequency components from a sound. It also has resonance, which allows it to carry a small frequency range at the top of the filter’s permitted frequencies, enhancing them. The LPF is useful for bass type sounds but it’s also practical for removing fizz or trebly components from a sound and for muting the sound by giving one the impression it’s in the next room; this is controlled via the cutoff.

The High Pass Filter (HPF) on the other hand has a fixed curve and is for cutoff frequency. It lets everything pass above a definite frequency which makes it useful for sounds that are treble-like, or which need no bass content like harpsichord, banjo, lead sounds, human whistle, and wind. One of the things I find amazing about the Korg Arp Odyssey is that it’s impossible not to be inspired by this instrument. The simplest movement of a fader creates noticeable changes that not only evoke feeling but permit you to make a connection with this piece of hardware like with no other. 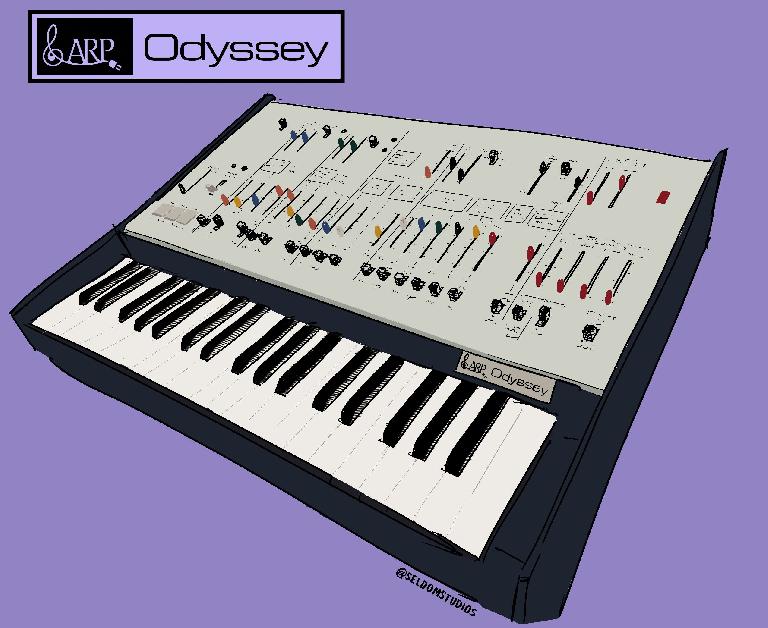 To the far left we have the Portamento fader, which I enjoy playing in conjunction with the keys, for it adds a nice glide effect while at the same time giving harmonic minor scales some life. Right above the Portamento Fader are the Noise generators, which generate two types of noise: white and pink. The mixer section controls the volume levels of the oscillators and noise generator, but it also controls the degree of ring modulation. Ring Mod allows you to create metallic tones by multiplying the two oscillators. One can switch between noise and ring mod by the flick of a switch. The mixer also determines the waveform of both oscillators, which is also controlled via toggling the settings.

More Than Just a Musical Instrument

The Arp Odyssey isn’t just a melodic synthesizer, it can create some great percussive sounds as well. You can achieve this by varying the envelope time or fluctuating the degree of oscillation. A good way to hear how the filters work is to set up a hi-hat sound (using white noise) and then play with that sound while adjusting the filter values. Complete reduction of all the oscillator volumes allows for great exploration that can create sporadic and unusual sounding effects as well.

It’s possible to make a complete track with the Arp Odyssey alone if you know the appropriate methods, which can only be cultured by practice and repetition. The Arp Odyssey has a place next to any piece of gear in your studio, and it will compliment your sound palette by giving you more than an ordinary musical instrument. How you use the Odyssey depends on what you need from it. No drum machine? The noise generator, S/H, filters, LFO, and ADSR are your tools. No bass? Put a percussive bass sound through some compression with slow attack. Leads? I think that’s where it shines, the whole VCF section is your friend.

Korg has done an amazing job at replicating what can be easily described as one of the most iconic synthesizers to this day. Not only was the founder of the original Arp Odyssey there to guide them through the recreation process, but Korg added a switch that allows us to utilize all three styles of the original filter. If slim keys were the only thing holding you back from getting your hands on a Korg Arp Odyssey, then the time is now. Pre-orders are now available for the new Korg Arp Odyssey FS. If you’re like me and don’t mind slim keys, you can still get the smaller version for less without compromise, because the actual circuit is exactly the same.

Check out the LFO used at the beginning, and Portamento used at the end of this reggae jam.

Listen to the Beautiful leads the Odyssey can make for a hip-hop beat.

Here I demonstrate the various sounds this beast can make, also adding some delay and reverb.