In this article we’ll learn about the core components of analog synthesizers and discover which ones are used to create and control the four properties of sound. 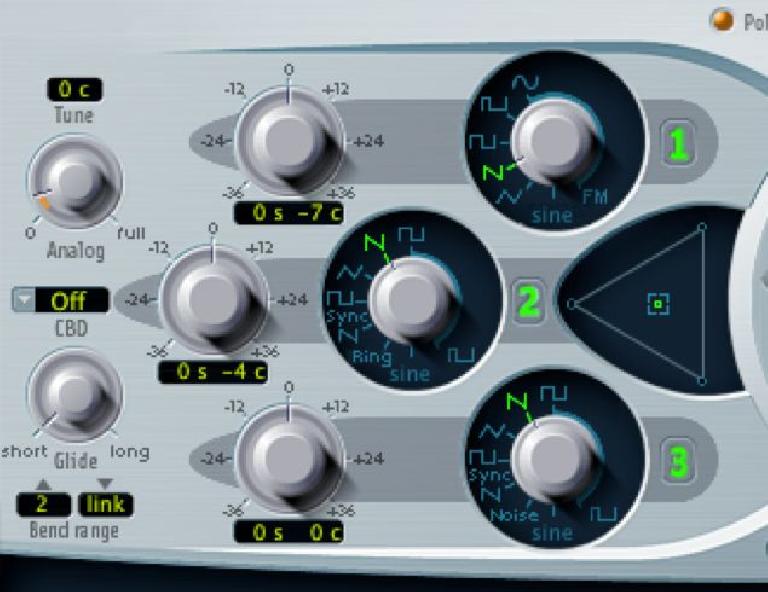 Figure 1: Tuning and Waveform controls of an oscillator from Logic’s ES-2 synth plugin

Oscillators are our source for producing pitched sounds. The pitch of an oscillator is determined by the notes you play on the keyboard as well as the settings of the oscillator’s various tuning controls.

Oscillators generate audio waves with various repeating electrical “shapes” (waveforms), and it’s the waveshape that determines what kind of timbre the sound will have.

Some synths have only one oscillator while others have several independent oscillators, each with their own waveform and tuning controls. This gives us the ability to combine waveforms to create new timbres, as well as create sounds that contain more than one pitch.

The following list will give you an idea of the timbral variety provided by the traditional oscillator waveshapes found in just about every synthesizer ever made:

Audio Clip #1: A comparison of the timbres from saw, triangle, square, pulse, and sine waves:

Unlike the sound we get from oscillators, noise has no discernible pitch center. Noise is produced by a synth component called a noise generator. For synthesizing the sound of jets, wind, surf, explosions, and various kinds of rising or falling transition effects the noise generator is the natural choice!

Some synths offer a variety of noise timbres designated by color names, such as white and pink, and more rarely, blue and red. The sound of white noise is a balanced combination of low rumble, midrange body, and high hiss, while pink noise is less hissy and more ‘rumbly’.ï¿¼

The audio signals from oscillators or noise feed into the synth’s filter section. The filter is truly at the heart of any synth, the main component used to alter the “raw” sound coming from the oscillators or noise generator. This is the essence of subtractive synthesis: you start with a sound from oscillators/noise that has a particular timbre of your choosing. Then you remove various characteristics of that sound with the filter to create new timbres. For example, soft pad sounds are often made by starting with a bright oscillator waveform (sawtooth, for example) and then mellowing out its sound with the filter.

Audio Clip #3: Unfiltered sawtooth waves from 3 oscillators, slightly detuned from one another, become mellower and lush with the use of a lowpass filter:

Depending on the types of filters provided and the controls they offer, the changes you make to the initial sound of the oscillators (or noise) can range from subtle to drastic. Some filters can also emphasize certain characteristics of the timbre contained in the “raw material” from the oscillators or noise.ï¿¼ 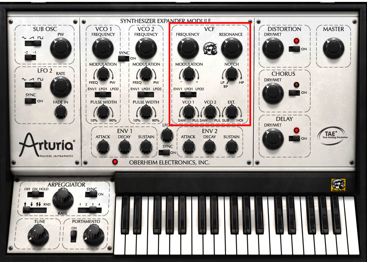 Figure 3: Highlighted in red, the filter section of the Arturia SEM plugin, modeled after an Oberheim synth from the 1970’s. Note the small mixer section at the bottom of the filter area for adjusting the incoming levels of two independent oscillators and a noise source (labeled “NOI”).

The classic filter found in just about every analog synth ever made is the lowpass filter. It’s used to make bright sounds duller, or to temporarily darken a bright sound for the purpose of making it brighter again via various programming techniques. Another type of filter is the highpass filter, useful for thinning out sound or removing rumble.ï¿¼ 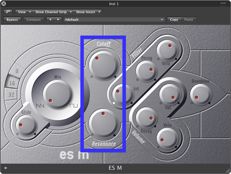 Figure 4: Cutoff frequency and resonance controls of the lowpass filter in Logic’s ES-M

A filter’s primary timbre-altering controls are cutoff frequency and resonance. When working with a lowpass filter, turning the cutoff frequency control all the way up lets you hear the raw, ‘natural’ tone from your oscillators or noise. Turning cutoff down then begins to cut down on the sound’s higher frequencies (any bright, buzzy, or hissy character). Highpass filters work the opposite way: the cutoff control must be fully down to hear the raw sound; raising it up thins out the sound.

Resonance is the parameter responsible for giving sounds a distinctly synthetic quality. When you hear a sound that goes “eeeeeeeowwwwww”, chances are that the resonance control has been turned up. Resonance can also be used to add an edgy “sizzle” to a sound.

We’ll learn much more about filters later in this series of articles.

Audio Clip 4: A bass sound programmed with a lowpass filter without resonance is followed by the same sound with resonance turned up.

Figure 5: The audio signal path in a traditional analog synthesizer.

The signal from the filter section feeds into the amplifier, the last stage in the audio signal path of a typical analog synth. It consists of two parts, the amp itself and an envelope generator.

Figure 6: The amp sections of the Pro-53 (left) and Arturia Minimoog’s (right)

The amplifier (“amp”, for short) is simply a volume control. However, it’s internal to the synth, hidden. It doesn’t have a manually operable volume control, and its normal volume setting is “off”. Now, all that might seem strange for something that’s supposed to let us control the volume, but here’s why things are done this way in a synth:

If the amp’s normal volume setting wasn’t “off”, sound would constantly leak out of the synth when you weren’t playing. Indeed, “off” makes a lot of sense! How, then, do we turn up the volume without a volume control? With an envelope!

When you play a note, the amp’s envelope generator begins to output a rising and falling control signal called (not surprisingly) an envelope (Figure 7). When this rising and falling signal is applied to the amp’s control input (see Figure 8) the volume of the sound will rise and fall in response. Ta da!

Figure 7: A typical envelope shape. Just by looking at it we can tell the story of how it will control the amp’s volume: starting from silence, the volume gradually rises and reaches a peak. From there, the volume gradually decreases to about ½-volume, holds there for a while, and then gradually fades out to silence. This is our sound’s “loudness contour”.ï¿¼ 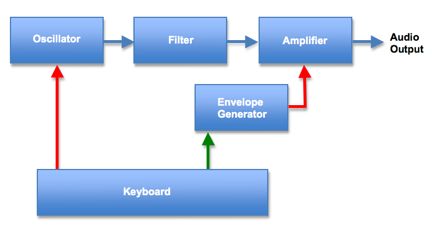 Figure 8: Block diagram of the main components in a basic analog synth.

The Envelope’s Influence on Duration

There’s more to the envelope’s role in shaping a sound’s loudness contour than meets the eye. Consider this: the envelope is turning the amp’s volume up from silence and back down to silence; thus, the envelope is also controlling the overall duration of the sound. So if volume and duration are so inextricably connected, does this mean there are really only three properties of sound?

In some ways, the answer to that question is ‘yes’. You may have even discovered this on your own through the listening exercises outlined in the previous article. However, on a synth, the amp envelope isn’t the only component we can use to change amplitude (we’ll see an example of this later in this series of articles). So for sound programming purposes, it’s best to stick with the notion of sound having four properties.

Although we’ve seen how an envelope is used to control amplitude, the one subject we haven’t covered is how to program the envelope generator itself. Fear not, for we shall [ahem] address envelopes in the very next article in this series!

For now, let’s wrap things up by reviewing the associations between synth components and the four properties of sound:

Learn synthesis in the AskAudio Academy.

Read Part 1 of this series here.

Read Part 3 of this series here.