All Articles Synths & Sound Design
Audio Repair for Video Sound, Part 2: Advanced Techniques
Hollin Jones on Mon, September 1st 0 comments
Language
To get really great voiceover for video you sometimes have to go beyond the basics'¦ Join Hollin Jones in the 2nd of this 2-part series on repairing audio for video.

In the previous installment we looked at some of the basic techniques you can use after splitting video sound off from its source clip to deal with problems like hiss, rumble and voices that vary in volume. Compression, EQ and gating are all important tools here, and the ones that come with your DAW will make a decent job of it if used carefully and correctly. We also noted that this is a definite art, and you'll need to spend time working on any given clip in order to sort out its specific issues.

When the problems run deeper however you may have to turn to more specialized tools. Most of these cost some money but compared to delivering a substandard finished product, investing a little in your production setup seems only sensible. One thing that's worth mentioning is that if you have a bunch of clips from the same recording session, it's an excellent idea to create a plug-in chain or a preset to apply to them rather than trying to dial in the same settings by hand over and over again. Some DAWs and wave editors allow batch processing, which could be of interest to save you time though won't take account of the precise differences between different clips of course.

Processing voiceover is not a new task. People have been doing it in various ways since the invention of talking pictures, though the tools on offer to even amateur producers are now very advanced. iZotope's Nectar is a vocal processing suite that's designed for both sung and spoken voices and has some great presets for dealing with voiceover, and there's an entry-level version available too. There's an EQ stage as well as levels, de-esser, breath control, gating and space section as well as pitch correction and special effects, though the last two aren't usually appropriate for voiceover. 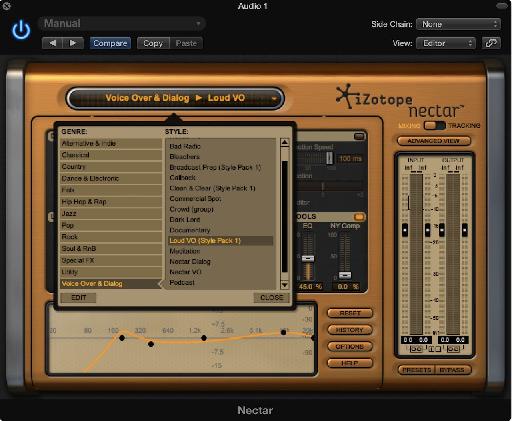 iZotope's Nectar is an excellent tool for processing dialogue as well as singing.

By dialing in some settings, perhaps using a preset as a starting point, it's often possible to significantly enhance the sound of vocal clips. iZotope also makes RX, an audio repair tool with individual plug-in stages including a declicker, denoiser and hum remover for cleaning up your sound. Perhaps most interesting is the Dialogue Denoiser, a multi effect that is able to learn the noise pattern of a clip and suggest multiband correction in realtime to combat volume and frequency problems. 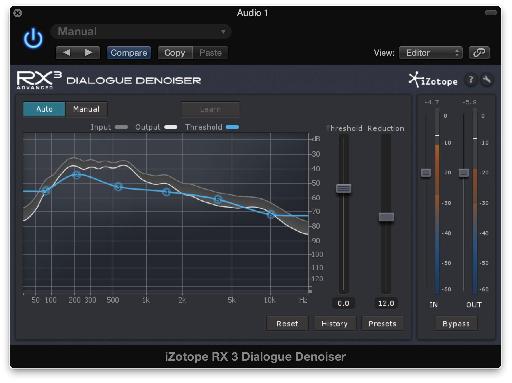 iZotope's RX3 Dialogue Denoiser can learn noise prints from audio and help clean it up.

Another useful tool is Waves' NS1 plug-in, a simple but effective noise reduction processor with a single fader that combines several processing stages into one to make a really good job of filtering out everything but the voice you want to keep. Use the slider to set the exact point where you're cutting the background noise but not the voice. Waves also makes the WNS Noise Suppressor for cleaning up dialogue tracks. More complex than the NS1, this has six adjustable bands as well as a suggestion feature and is very useful in real-world audio repair situations. 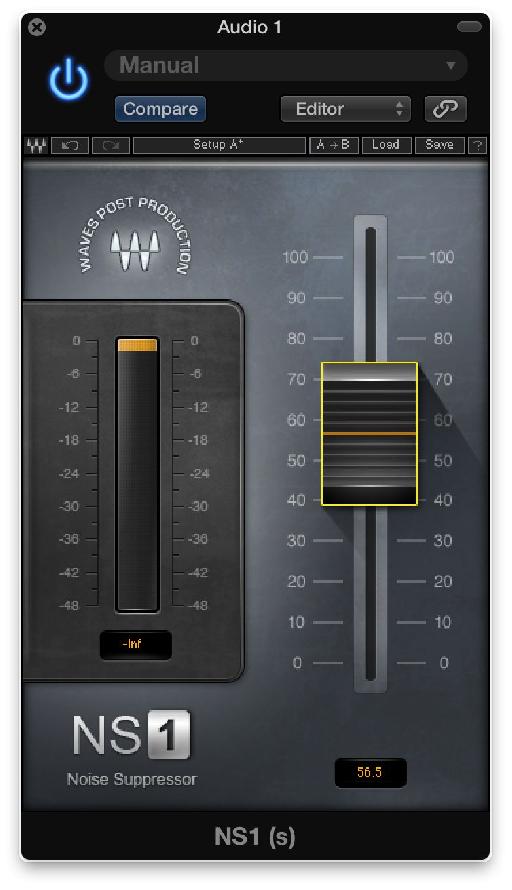 The NS1 noise reducer is a great and simple solution to cleaning up dialogue tracks.

On occasion you will run into a problem that can't be fixed so easily, where a sound exists at the same point as some speech and in a similar frequency range, like a door slamming in the background, or a car horn going off. Here you will need to look at a more advanced solution, if going back and re-recording the sound is not a possibility. iZotope's RX3 provides a highly detailed set of tools for analyzing audio using spectral technology so you see sounds visually. The idea is that you can isolate the offending sound and change it or remove it entirely without affecting the speech that is happening at the same time. This is tricky of course and requires some patience. Nonetheless it is often possible to 'reach inside' an audio clip and deal with a sound surgically before exporting it back into your video editor. Sony's SpectraLayers Pro does something similar, displaying audio signal visually and allowing you to isolate a sound before changing it. It can be a painstaking process but it can nonetheless save the day sometimes. 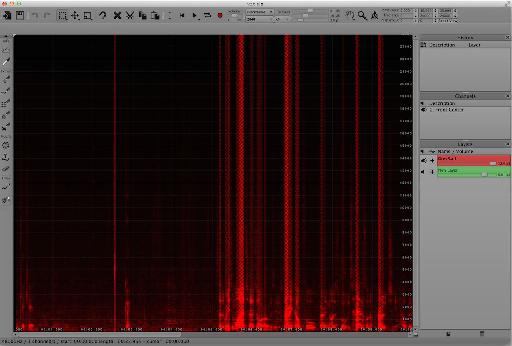 Get right inside your audio and clean it up surgically by using spectral tools like SpectraLayers Pro.

Getting your sound from your video editor to your audio editor can be a little fiddly, and in many cases you will have to manually export clips out to a folder then import them into the audio software, and do the whole thing in reverse after processing. Adobe has a neat solution, which is that if you right-click on one or more audio clips in a Premiere project you can choose to send them to Audition, apply all your processing and then when you save and exit, the audio is automatically updated back in the Premiere project. This is a massive timesaver if you happen to have both apps as it saves lots of tedious exporting and importing. Final Cut Pro and Soundtrack used to have a similar functionality though unfortunately it was killed off along with Soundtrack with the move to Logic Pro X. 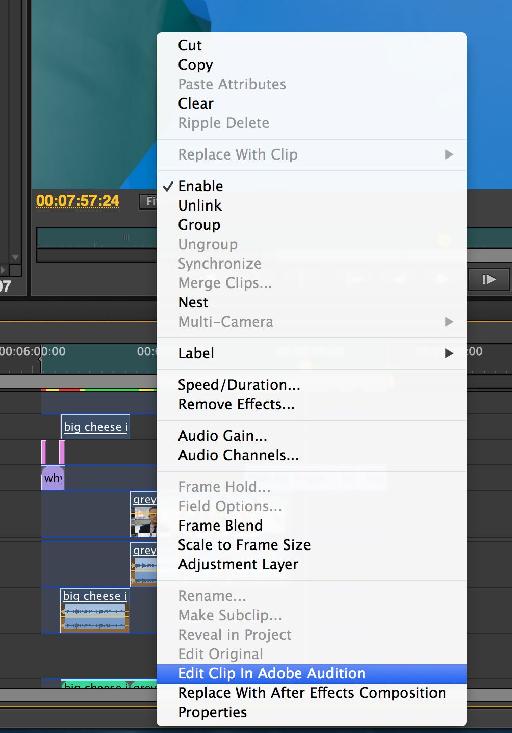 You can send multiple clips for detailed processing from Premiere to Audition without having to manually export them first. 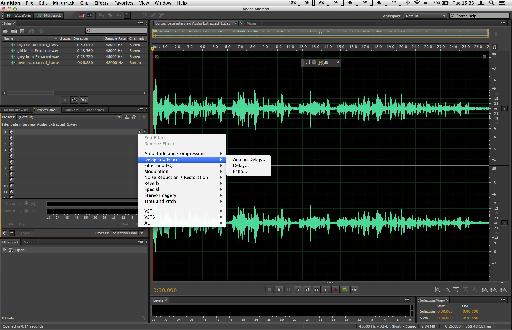 Apply processing externally then fire sound back into your video app, or import and re-sync manually.

Re-syncing audio in your video editor is actually the least difficult part of this whole process. Import the clips to a new audio track and deactivate snapping, since it's unlikely that snapping will be accurate in this instance. Zoom in to a fairly precise level and then nudge the processed audio clips until they sync up with the mouth movements onscreen. If you have kept your sample rates consistent across all your devices and projects there shouldn't be any issues with drift. If there are, you might have to cut the audio into smaller sections and sync each one manually with the onscreen action, but this will remind you to get it right next time around.

You can then mix the voiceover with your other program sound in your video app and perhaps apply a small amount of extra EQ to account for the way it interacts with the music and other sounds, but at the end of it all you should have some clear, glitch-free dialogue tracks that will make the end result look and sound great!