In this tutorial we'll be recreating the main melodic synth sound from Daft Punk's Around the World, the one that begins at 0:26 in this video:

We'll be using Logic's ES 2 here, along with an effect plugin or two, so let's get started.

Fire up Logic and start with a new empty project containing one Software Instrument track: 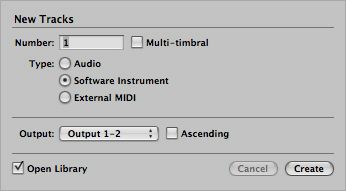 Click and hold the default EVP88 instrument at the top of the channel strip and choose 01 Logic Instruments > ES 2 Hybrid Synth from the pop-up menu:

This opens the default ES 2 window: 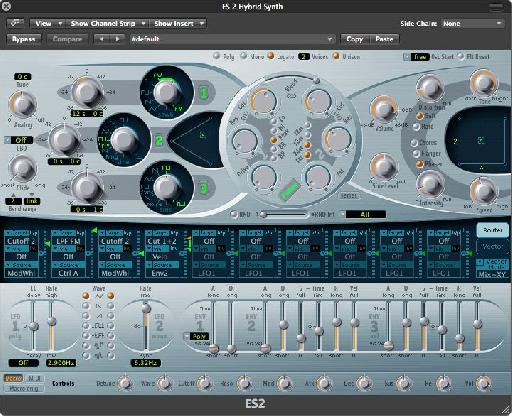 First, here's the melodic riff (or repeating figure) displayed using Logic's Score Editor for those of you who read music:

It just repeats over and over at a tempo of about 130 bpm, with only a couple of breaks, so once you've got it down, you can easily loop it.

Now, for the sound itself, close listening reveals that it has a short, sharp attack and is mostly played staccato, although at the end of each 4-bar phrase it's held for three beats, roughly. During that held note, you can just hear a little bit of vibrato added to the sound as it decays. It's a fairly mellow sound, as opposed to bright and buzzy, and has the slight hollowness that is characteristic of square or pulse waves, which is what we'll be using to create it. You can also hear the classic "dwoink" sound of a resonant low-pass filter rapidly opening and closing down under the control of a fast envelope, so we'll need some filtering, with a second envelope, to recreate this sound as well.

Finally, you can also hear subdued 16th- and 8th-note echoes that die away fairly quickly in the spaces between the notes. Since we can't create that echo directly in ES 2, we'll add a synced delay effects plugin as the final step in our sound design.

Without further ado, here's my ES 2 version of the patch (click on the image to see a larger version): 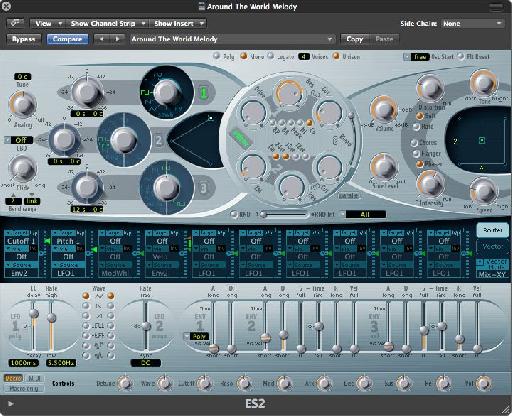 Naturally, you should try to reproduce these settings as closely as you can to create the sound. Since there are some important sound design details in this patch I want to be sure you catch, I'll go over the settings in detail, reading from top to bottom and left to right.

The final step is to leave ES 2 and add the synchronized delay which is an important part of this sound. To do that, click on the first Insert button in the ES 2 channel strip and choose the Stereo Delay effect: 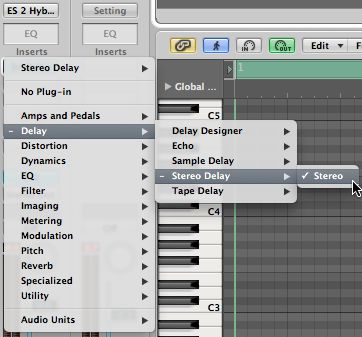 In the Stereo Delay window, apply these settings: 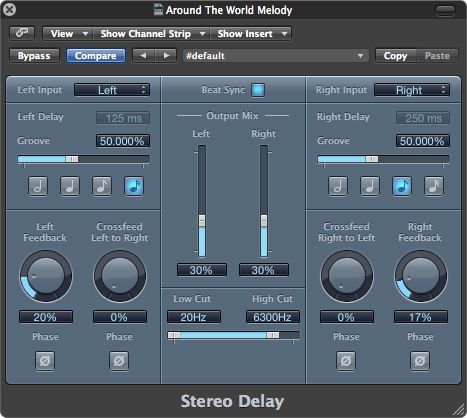 Note in particular that Beat Sync is enabled, so the delays will be in sync with our tempo. Once it is, set the Left Delay to a 16th-note, so you'll hear fast echoes in the left channel, and the Right Delay to an 8th-note, for a different echo in the right channel. (In the original sound, it sounds to me like the right channel echoes longer and slower than the left, but that might just be an artifact of the YouTube video's audio). At any rate, we're going to try to recreate the sound as closely as we can, so let's use these asymmetrical echoes for now; you can always modify these settings if you choose.

Also note the reduced feedback settings for the left and right delays, and the relatively low output mix for each. We don't want to hear too much of these echoes, or they'll overwhelm the sound.

And that's basically it. If you follow these settings, you should get a sound very much like this, to which I've added a kick drum to help emphasize the beat:

Once you've recreated the sound, you should of course play with all these settings to see what they do and to come up with your own variations.

I hope you've found this sound design lesson useful. As always, experiment and have fun!

Learn more about everything the ES 2 can do with Steve H in Logic 206 - ES 2 Exposed.