All Articles Ableton Live
Ableton for Hip-Hop, Part 1
G.W. Childs IV on Mon, July 9th 1 comments
Language
In part 1 of this series on producing Hip Hop in Ableton Live, G. W. Childs explains the process and shows how to build the initial loop. Stay tuned for part 2 in this series coming soon!

My numerous encounters with other Hip-Hop artists and producers has taught me many things about music and the genre, itself. The biggest things I've learned: They are a very savvy bunch.

There have been certain tools that have come and gone, over the years. When one tool has been proven, given the thumbs up, and passed along, the rest of the community would adopt this tool, and it would become a mainstay. In some cases, like the Roland TR-808, it would become legendary.

As software has become more prominent, plug-in suites, DAWs and soft synths have also become virtual tools that others might adopt. Pro Tools, I've noticed, has been one of the longest running DAWs to be used within Hip-Hop production, and with good reason. It's a package that has been the main tool in creating many of the biggest albums over the last decade for the Hip-Hop genre, and several other genres.

This has also confused me on a few levels, when I look at a package like what has been put together forming Ableton Live. Hip-Hop, since its beginnings, is a sound that has always relied heavily on rhythm. Ableton Live is a package that does amazing things with rhythm. Hip-Hop, currently, and for some time, has greatly utilized (though not exclusively) recorded audio loops. Ableton Live has always been more loop oriented than any other DAW available.

In this series of articles, it is my mission to show you how Ableton Live could, and possibly should, change your entire music creation system if you're producing Hip-Hop. From creating beats of your own, to importing beats from others, we will go over how Ableton Live is a one stop shop for Hip-Hop.

We'll also be going over additional tools that come within Ableton Live that can be just as handy as having an old favorite around, like an ASR-X.

To follow along with this tutorial series, you actually don't have to spend any money... At least for 14 days. Any of Ableton's packages for Live can be downloaded free of charge, and will run for 14 days. During this time, you can save, record, and everything you'd be able to do as a purchaser.

Aside from any Ableton demo version? Just the commitment to open your mind to learn a new way of doing things that is, not only, very simple, but refined in terms of the speed that you can get things done!

Step 1 - What Does Ableton Have to Offer Hip-Hop?

Before we get into everything Ableton does, which is plenty, I'd like to outline the key points to keep you enticed, and to give us a nice road map on what we have ahead.

So, back to the initial question, what does Ableton have to offer Hip-Hop?

Okay, I've laid it all out! Now, let's start taking a look at importing audio files.

There are tons of drum loops, guitar loops, synth loops, and song loops that are just waiting to be used out there. Ableton is amazing at letting you use them! Built-in to Ableton is a very handy browser that allows you to access Ableton devices, AU and VST plug-ins, and audio files, loops, and samples.

Do you have to use the browser, though? Absolutely not! In fact, you can drag and drop audio files right into Ableton. 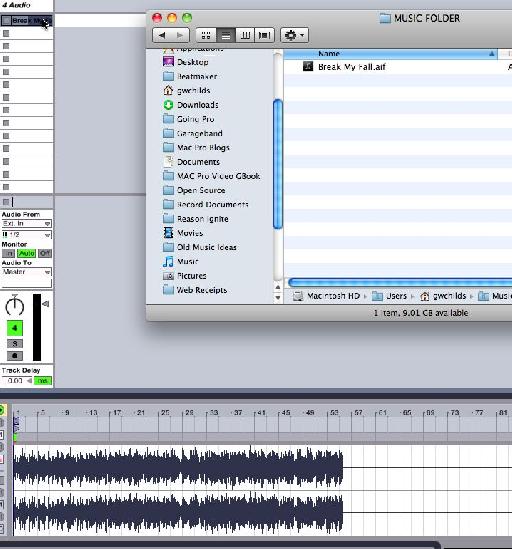 I had an AIF file of my song floating around in a folder, and decided to just drop it in. Immediately, Ableton began to analyze the entire song to determine its original tempo. Because my host tempo was at:

84.86 BPM... Ableton has a few things to do. It does the aforementioned mentioned task of beat matching, but because Ableton warps audio as it beat-matches, the imported audio file is automatically ready to run along side my host tempo at 135 BPM.

That's it! There was no work!

With smaller clips, audio that is imported will, in most cases, automatically be set up as a loop. But, because Ableton is also used as a DJ tool as well, full songs are brought in warped, but not looped. As this is the case, we'll need to also indicate that this is to be looped by pressing the loop button...

Now, my imported audio file will now loop seamlessly. And, it was absolutely no work. Try this in Pro Tools, Logic, or Cubase without knowing the original BPM of your audio file, it may take longer than you think.

From here, I'll actually turn my host tempo down to 90 BPM, something a little more suitable to the genre, and move forward.

So far, we've covered a very important operation of Ableton and Hip-Hop. That being loop creation. In the next tutorial (coming VERY SOON), we're going to add a beat over the imported loop, with a drum rack in Ableton Live. See you there!

Dream It. Do It.
Do you want to learn Core Live 8?
Yes, I want to learn!
No Thanks, I just want to read the article.
Feedback
How are we doing?
We'd love your thoughts, feedback and questions regarding our new site. All feedback is appreciated!
We do not respond to this form! If you need support, please visit our support page.
Thank you for your input!
Your message has been successfully sent
Course Advisor
Don't Know Where To Start?
Ask A Course Advisor