All Articles Ableton Live
Ableton Live Sound Design: Demonic Voices
G.W. Childs IV on Mon, February 18th 1 comments
Language
Warning! This tutorial is not for the faint of heart. Still reading? Prepare to release your inner evil using Ableton Live's effects to transform your voice into something from an evil place.

Every now and then, when I'm working for a video game client, I'll get a request for a really evil voice. This is a little trickier than you might think, as evil is subjective, for the most part. But also, too much can be cheesy, too little sounds cheap. The other thing is that any effect you apply always needs to add to the actor's performance, and never take away from it.

And, I can tell you, if you get the right effect with the right actor... well, they'll be talking about it for years. Even after the video game, or film is long since obsolete.

Now, there are a lot of effects out there that, when used, or misused, can create some seriously evil effects. But, surprisingly, the effect that we'll be covering in this tutorial is an effect that is still, strangely overlooked.

Ableton has an excellent vocoder, and it's one of the few vocoders out there that features its own built-in carrier. At least in the vintage hardware vocoders case, you usually have to hook up what's known as a carrier signal, which will later be modulated by something like a voice. Live's vocoder has, however, a simple noise oscillator. And, this simple noise will be what brings on the evil.

For my example of evil, I've recorded myself saying something very disturbing...

Now, to make things a little more sinister, let's slow the voice down a bit. I'll do this by dragging out the ending Warp marker. 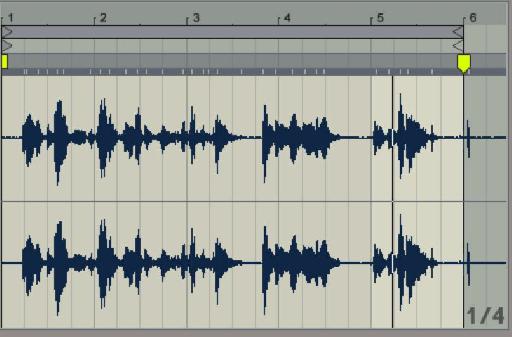 Drag out the ending Warp marker.

And, to make my voice a little deeper, and more Barry White, I'll transpose down 3 steps in the clip editor. 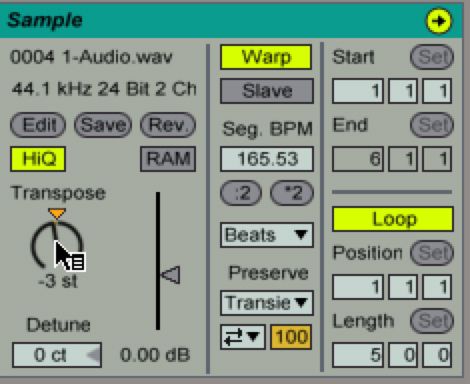 Transpose down 3 steps in the clip editor.

Normally, I'd change the Warp mode when stretching the audio this way, but I found that the strange artifacting that goes on can add to the creepiness factor. You can always change this, if you like, to Complex Pro, or something along those lines.

Now, as soon as you apply the vocoder, you'll already notice something evil going on. And, you're probably familiar with this, if you've ever employed the vocoder in Ableton before. But, now, we're going to do a little fine tuning.

First, I'll set the amount of bands to 40. The more bands that you apply, the more comprehensible the annunciation will be, generally speaking...

Next, I'll adjust the Gate Threshold so that it takes care of any background noise, that's something you don't want. Why? Because the vocoder will vocode the noise as well. Just set the level to whatever sounds good on your end. For me, I'll go with -30 dB.

Finally, I'll take the formant pitch down just a hair at -0.60. This will take the perceived pitch of the voice down again.

Take the formant pitch down.

Definitely much creepier than when we began, if you can get past my sad attempts at trying to be a stalker.

'¨So, there you go, quick and easy evil that can be used as a real-time effect, for when you're stalking someone, or when you just need a baddie for a movie, or video game.