All Articles Ableton Live
Designing Video Game Interface Sounds with Synths in Ableton Live
G.W. Childs IV on Tue, February 20th 0 comments
Ableton Live has all the tools you need to create your own video game interface sounds. It's fun and can even earn you some money! G.W Childs is here to show you how it's done.

Out of all of the DAWs, Ableton has always been one of my personal favorites for video game sound design, specifically interface design. In this tutorial, I’d like to show you how easy it is to bring up a synth in Ableton and begin capturing sounds that will work in any interface.

Analog is generally a starting synth for me. It’s full featured, but with a minimal presentation. And over the years, I’ve gotten to be pretty quick at sculpting some basic waveforms with it. When I begin working with it during a session, I usually don’t sequence anything.

Instead, I like to trigger Analog via the Computer MIDI Keyboard of Ableton Live, as the laptop keys on my MacBook Pro already have the tactile presence of a button. I find this stimulates my imagination and I can use the gate times of the key press to lock in the length and basic characteristics of the sound I’m trying to emulate within my own mind. I’ll generally start with the A key on my QWERTY, and use the Z and X buttons to guide me somewhere around C3.

Once the basic tools are in place, I like to start in with a basic button press, as everything from there tends to be a derivative, outside of an exit sound or a menu switch. To get the sculpting process started, I’ll switch over to the first Amplitude Envelope of Analog, where I have access to the ADSR settings.

Here, I’m going to go ahead and drop down the Decay time and Sustain settings with the Envelope 1 Slope so that I’m already getting that blip of a synth sound that is the classic beginning setting for so many classic interfaces. Shorter and snippy is key here as we’re going to use effects later to drag out the length and make it more interesting.

Set Up The Environment

Here’s where the head game really begins for me. I like to be able record my experimentation. So I like to set up my environment further so that I can record my progress as I drop on effects and so on. Here’s where Ableton really shines, as you can set up an Audio track for your audio track to record as audio what you’re doing in real time.

I’ll create a secondary audio track alongside my Analog track, and set its input as the first Return track in Ableton, currently populated by a Reverb.

I’ll leave the Monitor section of the new audio track as Off, as I am not going to care to monitor what goes in to it. I just want what’s going to record to it. More on that later. 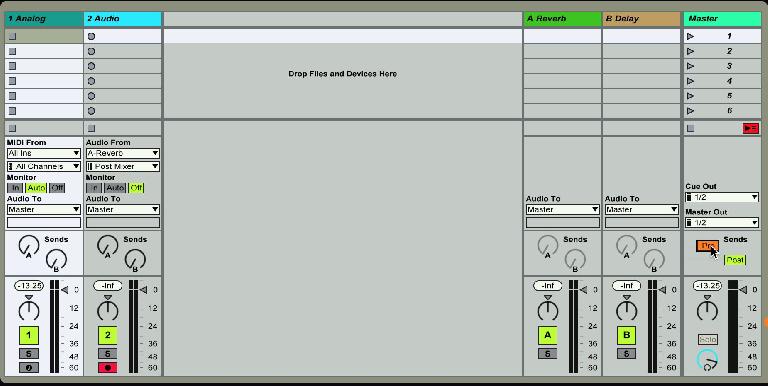 Finally, I’ll set the first Send to Pre, so that everything tapped is prior to the fader, ensuring things are nice and saturated, where the Return track’s reverb is concerned.

This, for me, is where the worry and second-guessing begins to dissipate as once I hit the clip record button, I’ll have a wonderful audio journal of everything I’ve done. Holding down the Command button on my keyboard, I’ll arm both the MIDI track hosting Analog and the audio track set up to record my session. 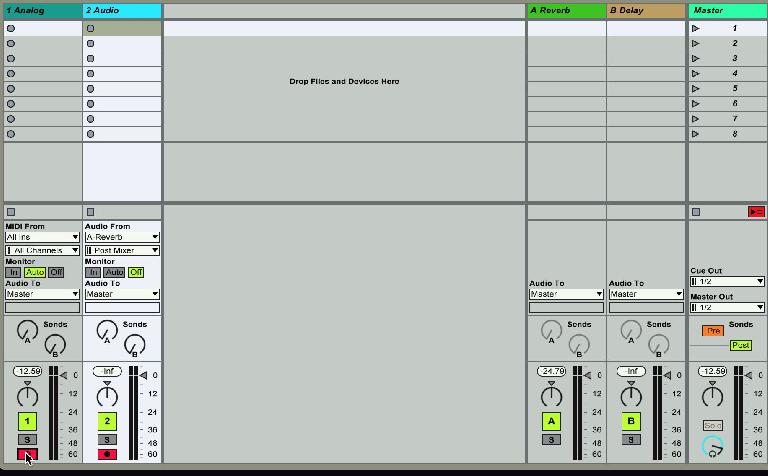 All I need to do now is press the clip record button. But before I do, I’ll just drop down the fader of the Analog MIDI track and raise the Send of the same track to around 75%, giving the return track a good clean signal  but plenty of headroom to make it sound a little more hollow.

I'll add a Compressor on to my Return track, after the Reverb. This part sounds a little strange but I actually found that by compressing the Reverb, itself, I can compress and bring forward some of the finer characteristics of the reverberating parts.

Alright, let’s press record on the Return track’s audio track, and have a little experiment session. This where reverb becomes fun again! As I press my QWERTY keyboard, I can trigger different instances of my blip-synth, and adjust my Reverb settings as I go!

I can also adjust Analog’s settings, in semitones between each oscillator, mix, and any other synth settings I can think of that might make my potential UI tones sit just right.

Once I feel like I’ve got plenty of raw, recorded, reverberating synth goodness, I’ll cease recording and drop my newly recorded audio clip of all my experimentations into a track in the Arrangement view.

I find it easier to cut and edit raw audio in the arrangement view, as it allows you to cut in to the audio and mould it in ways that the Loop Editor doesn’t quite allow. I’ll select little takes that I think are cool, and then use the Command+E shortcut to separate the cuts from the original recording.

Once separated, I can rename the clip as Interface 1, or whatever the pre-directed filename is from the developer with the Command+R shortcut.

With a separated clip, I can now use the Loop Editor in Ableton to start destroying the pristine audio that I have easily put together. Warp points are your friend, as you can drag audio out in horrible ways. So much so that in certain Granulation Resolutions, audio really does tend to scream when fully stretched out.

And that’s one edit, of one segment, of the however many minutes I spent noodling around with a synth and a reverb to get several variations that I can edit to the moon and back. Once I have a healthy stack of different blips, bleeps and bloops I can select the ones that match what the developer wants in terms of length and feel.

Being able to record your experimentation is taking things back to how some of the great sound designers would work. They’d find a cool toy or an interesting device and record several variations of how it could sound. The fun would be in capturing it. Later, once in the studio and no longer in the field, designers would take specific clips and really build them up, sometimes stack what they’d record in neat and amazing ways. I used to handle the LucasFilm sound archive, when I was an employee there. You’d be amazed to hear the different sessions of guns firing that would be recorded. The whole session would be left, just so a sound designer could go back and mine it however many years later. You could even still hear people talking in the background!  They still use those archives! Well, Disney does! Dream It. Do It.
Do you want to learn Wavetable Explored?
Yes, I want to learn!
No Thanks, I just want to read the article.
Feedback
How are we doing?
We'd love your thoughts, feedback and questions regarding our new site. All feedback is appreciated!
We do not respond to this form! If you need support, please visit our support page.
Thank you for your input!
Your message has been successfully sent
Course Advisor
Don't Know Where To Start?
Ask A Course Advisor