So you have this beat that doesn't seem to be sitting quite right with the elements in your mix. You drag an EQ onto the channel strip and start tweaking the EQ setting but you don't seem to be getting the right sound for your beat. Why not try using a filter instead to beef up your beats? With filters you can make use of their different filter slopes to carve and color your sound. I will show you how you can use Logic's Auto Filter and Ableton's Auto Filter to beef up your beats. These filters also include extra features as well to help, which I will discuss.

I have used an Apple Loop from the Logic Remix Tools pack. It is called Trance Deep Beat India 02. It is a standard Trance/Tribal beat.

Here is what the beat sounds like before we start filtering it:

I am going to use Logic's Auto Filter to spice up the beat. I have inserted an Auto Filter onto my channel strip.

First I have rolled off a bit of the high end on the channel by reducing the Cutoff to 89% with a 24-pole Low Pass Filter to reduce some of the high end. This will give the beat a more analog type sound.

To really beef up the beat I have increased the amount of Distortion on the Input and Output in the Distortion section. By adding very small amounts to the Input and you will notice the bottom end becoming more prominent. It will also add some extra warmth to the beat. The Output tweaks the saturation on the high-end of the audio. I have increased this slightly as well.

Take a listen to the loop after the filtering:

Logic's Auto Filter has an Envelope and LFO section. You can use both these areas to modulate your beats. With the Envelope section I have left it at its default settings, but have brought the Cuttoff Mod of the Envelope to 19%.

I also want to make use of the LFO section on the Auto Filter. I have changed the Rate to 1/4, and I have increased the Cutoff Mod. of the LFO to 24%. You will start to hear a pumping effect on the beat now.

You can also change the waveform type in the LFO, and alter the Rate Mod. for different LFO effects on the beat. Try them out and see how they sound on your beats.

Ableton also has a very handy Auto Filter that can alter the tone and color of your beats. I have imported the same loop that we used in Logic Pro into Ableton and have then added an Auto Filter onto the channel strip.

The Ableton Auto Filter also has a LFO and Sample and Hold section. I have chosen a square waveform for the LFO, set the LFO to a Rate of 1. This will cut out some of the low rumble saturation on the beat. 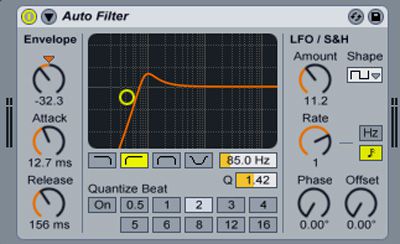 Take a listen to the beat after the Auto Filter:

I want to try something different with this beat in Ableton; I think serial filters will help. I have added another Auto Filter in the signal chain. On this filter I have chosen a High Cut Filter with a gain at 9.32kHz and a narrow Q of 2.65. 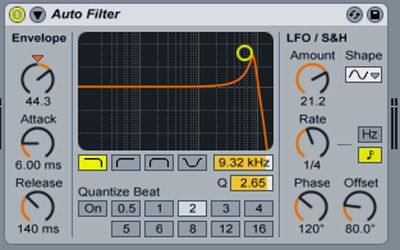 Take a listen how this gives a modulated effect to the beat:

As you can see and hear, quite different results can be achieved by applying filtering to beats as opposed to equalization. You can also get quite creative with the filter and its LFO and Modulation effects. I hope this inspires you to go and process your beats differently.