All Articles Ableton Live
Fun with Follow Actions in Ableton Live, Part 2
Rory Dow on Wed, September 12th 0 comments
Language
Part 2: If you haven't yet used "Follow Actions" in Ableton you're in for a pleasant surprise. Get ready to be inspired as Rory Dow takes you through the ins and outs in with audio examples

Follow Action are an often overlooked feature of Ableton Live but they can be a source of great inspiration and add an element of unpredictability to your Live sets. In Part One, we looked at how Follow Actions work, plus a couple of practical examples. In this article, we'll continue our look at practical applications.

Start with a one or two bar MIDI clip containing a melody that you like. Now duplicate the clip and make some variation to the MIDI within. Repeat until you have three or four clips with variations on the main theme. Your clip groups should look something like this:

Follow Actions require all clips to be grouped, one after another in Session view.

You can get as creative as you like with this. Replace the melodies with chords, set a different start point or loop length for each clip. The contents can be anything as long as they are musically related.

Select all the clips in the group and edit the Follow Action properties as follows: 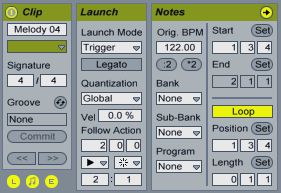 It's a simple setup, all the clips have the same settings and so will behave exactly the same. Once a clip begins playing, it will decide semi-randomly which clip to play next after 2 bars. There is roughly twice the chance that the clip will play again (Action A) over choosing a different clip (Action B). This gives us a musically repetitive result that will introduce changes reasonably regularly (usually within 2 to 8 bars). Let's hear what is sounds like:

You can hear the melody changing randomly. Using the Chance values carefully means we get just the right balance between repetitiveness and change.

The real beauty of this semi-random approach to composing is that not only can it throw up structures that wouldn't have otherwise have been discovered, but it also helps to keep a song feeling fresh whilst you work on it. Every time you play the song through, it will be different.

Let's take a look at another example...

Pick a drum loop, something like a breakbeat that will slice nicely. The ubiquitous Amen break is a nice one to experiment with. Make sure it's trimmed to a bar or two. Now copy the clip and set a new start point. Repeat this until you have around ten copies, each one exactly the same audio loop, just with different start points.

Now copy a few more. For each clip, do something interesting within the clip properties like enabling reverse, shifting the pitch or adding some clip automation. You could also set different loop lengths within the clip. Don't be afraid to experiment. You can even add a completely different drum loop to the group, repeating the same process of duplicating the clip with different start points and clip settings. Add maybe another 10 clips this way.

Now select all the clips in the group. We'll give them all the same Follow Action to begin with. You may want to tweak the Chance parameters here in order to get the effect you want but these are good starting points. The result here is that random clips will play with a good chance that the next clip will be the next one in the group.

It's worth inspecting individual clips to see if they could use different settings. For example you might want one or two clips to have a chance of repeating to create a sort of stutter edit. In this case you could change Follow Action B to 'Play Again' which means the specific clip would have a 2:1 chance of triggering again instead of triggering another random clip.

You could also adjust the Follow Action Time for certain clips. Set a couple of clips to play for a bar before the Follow Action is triggered so that the complete drum loop will play through occasionally before resuming the mayhem.

The whole process above can take just a few minutes and turn a drum loop like this:

There is a great deal of power in Follow Actions, a feature which is often overlooked. Their real power lies in the ability to add some controllable randomization to your Live sets whether it be subtle variations to a melody or full-on breakbeat slicing chaos. I hope that these articles have sparked some ideas for you to use them in your own productions.