All Articles Ableton Live
Getting the Most from Ableton Live's Phaser
Mo Volans on Fri, July 8th 0 comments
Language
There are so many 3rd party instrument and effects plugins to choose from these days. However, it's worth delving deeper into the effects built-in to Ableton Live. You may be pleasantly surprised!

Ableton Live has loads to offer in the area of effects processing and my new video tutorial, Live's Effects: Plugged In takes an in depth look at every bundled plug-in that comes with Live. Although there are so many different plug-ins to choose from, in this quick tip, I decided to show you the extremely flexible Phaser in action.

Step 1 - Choosing Some Audio to Process

Of course you can choose any audio you like to process with Live's Phaser but I tend to find that organic sounds with plenty of sustain react very well with this effect. I have opted for a string sample here as I think it is the perfect example audio in this case.

You can hear the dry string sample we are going to use below...

The audio w'll be processing with the Phaser

The dry audio plays back:

I'd like to show you two possible, contrasting uses of Live's phaser and hopefully this will demonstrate how capable this little plug-in really is. In this first instance I have used the Phaser to create a smooth, undulating effect that adds movement and width to our sound.

I have used the Phaser's '˜Earth' mode which gives a generally tamer result, allowing the original sound to breathe. With this mode in place I was also able to use a reasonably high feedback setting without over cooking the effect.

The modulation in my basic / subtle patch comes from the Phaser's built in LFO. I used a nice easy sine wave based setting and also left the envelope follower deactivated. These settings were intended to create a simple, classic phasing effect. You can hear the results below... 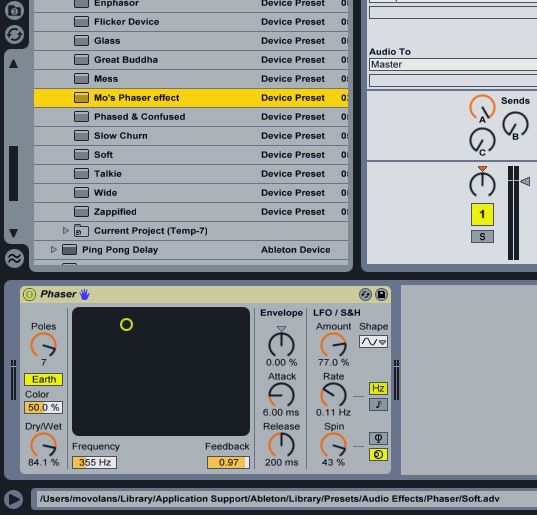 The Phaser performing some subtle processing:

Step 3 - Taking Things to the Extreme

To show you the true flexibility of this Phaser effect I thought I'd also produce a contrasting, more extreme patch. The first thing I did here was change the mode from '˜Earth' to '˜Space'. This adds extra harmonics, a more aggressive feedback circuit and a generally more resonant feel to the Phaser's output.

This setting is combined with some extra feedback and an all important tweak to the LFO section. Instead of a sine wave based LFO a random oscillator is used. With the LFO amount ramped up you can clearly hear a synth-like, sample and hold effect produced. The whole LFO is synced to Live's tempo by using the 3/8 setting.

These small tweaks move us from a traditional, subtle effect to something much more intense and synthetic. Try this yourself with your own sounds and settings. You can hear the final effect created in the audio file below. 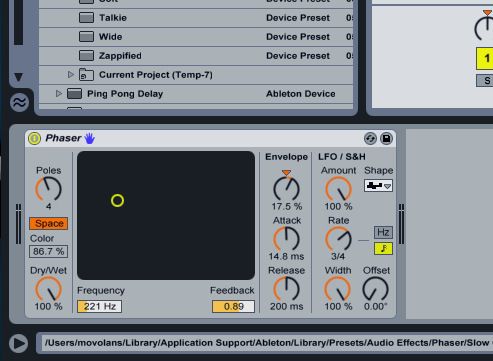 Get deeper into all of Ableton Live's plugins in Mo Volans' Live 8 202 - Live's Effects: Plugged In!