All Articles Ableton Live
Have Fun with Resonators in Ableton Live
Rory Dow on Tue, November 6th 1 comments
Language
Tune in to this tutorial on what Ableton Live's Resonators device is, how it works and... how to have some fun with it on your tracks. Rory Dow is your guide on your way to resonators mastery.

Resonators is one of the many audio effect devices included in Live's arsenal. It's one of the more esoteric and often gets overlooked, but it sounds fantastic and once mastered, will keep creeping into your songs again and again.

What on earth is a Resonator?

A resonator is a generic word meaning anything that can exhibit resonant behavior ie. it oscillates at certain frequencies. This could obviously mean anything from a guitar string to a drum head. In the context of Ableton's Resonators device, it means an audio effect which will take the incoming signal and run it through a series of delay lines. When the delay lines are fed back into themselves they begin to ring, or oscillate, creating a series of tonal harmonics which are superimposed onto the incoming signal. The clever bit is each of the delay lines (there are 5) can be tuned chromatically so the resulting harmonics are always musically useful.

The Resonators device is very simple. The incoming signal first passes through a multi-mode filter and then into each resonator in parallel. Resonator I is fed with the stereo signal from the filter whilst Resonators II and IV are fed with the left channel and III and V with the right. This means the resulting resonant tones will have a nice stereo effect. The Width parameter can be used to pan the resonators to the centre if mono is desired.

The Decay parameter controls the feedback, or 'ringiness' of all the resonators together.

For tuning, Resonator I sets the root note and all the other resonators are offsets of that root note by +/-24 semitones. There are also fine tune and gain controls for each.

Each resonator is tuned relative to the first which makes it easy to tune them all to a different key.

There are two different modes, A and B. Each have their own tonal qualities and there is also a Color parameter to adjust the overall brightness of the output.

So what can I do with it?

Here are some ideas to get you kick started with resonators:

Placing Resonators after a long reverb tail is a great way to make thick, drone-style atmospheres.

So that's how they make that sound!

Resonators are used a lot in electronic music, and if you've never used one before you'll quickly have that 'so that's how they make that sound' moment. They can be used for a very obvious effect, or used more subtly to add a tuned element to any sound that didn't previously have one. It's pretty cool of Ableton to include a resonator effect as they're quite esoteric - I'm sure glad they did though!

Rory Dow
Rory Dow is a musician, sound designer and writer. He spent 15 years as a freelance musician writing for television before side-stepping into music software production. The majority of his work is taken up as a trainer and sound designer for London-based software company FXpansion but he also likes to write music and articles and is a self-confessed synth geek.
Related Videos
Comments (1) 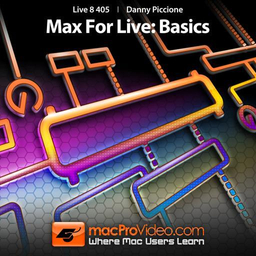 Dream It. Do It.
Do you want to learn Max For Live: Basics?
Yes, I want to learn!
No Thanks, I just want to read the article.
Feedback
How are we doing?
We'd love your thoughts, feedback and questions regarding our new site. All feedback is appreciated!
We do not respond to this form! If you need support, please visit our support page.
Thank you for your input!
Your message has been successfully sent
Course Advisor
Don't Know Where To Start?
Ask A Course Advisor