NOISS COKO, the creator of Sempler Pro, has been on an update drive and this is the first of his packs to get the full overhaul for Live 10.

FM Delay is a stereo delay effect that offers individual time control for each channel, also including two oscillators as modulation source for both left and right values. Time and rate are expressed using different unit styles, such as musical notes, note durations (sync) or milliseconds/Hz. 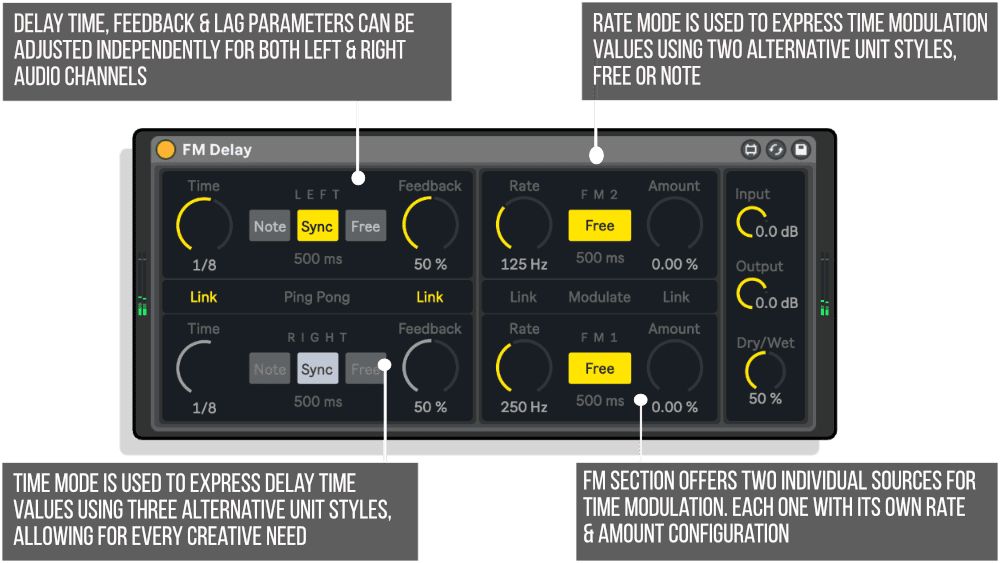 This device covers a wide range of creative needs, besides being a classic delay effect, working as a completely versatile tool that could be applied to all kind of instruments and sounds. Using low modulation frequencies, it's easy to produce clear tones that result in deeper and intense bass sounds. Higher values will add harmonic richness and overtones to the signal, similar to an overdrive or even a bitcrusher effect.

AM Module is a versatile and useful device that can be used to create auto panning, tremolo or amplitude modulation effects. It offers four different modulation waveforms and several ways to determine its frequency, covering a wide range that extends from 0.01 Hz to 12.500 Hz.

Medium-high rate values will add overtones and harmonic richness to the signal, creating a classic AM effect that could be applied to percussions, synths, or any desired instrument.

While working on sync mode, rate values will be synchronized with Live's global tempo, allowing to generate rhythmic modulation patterns from pad or string sounds. A chain of two, three or more modules with different configurations, could be used to create polyrhythmic patterns and more complex results.

AM Chain is an audio effect that uses four modulation layers, where amplitude modulation frequencies are only defined using musical notes. For instance, if the selected note is A3, its frequency will be equal to 440 Hz. 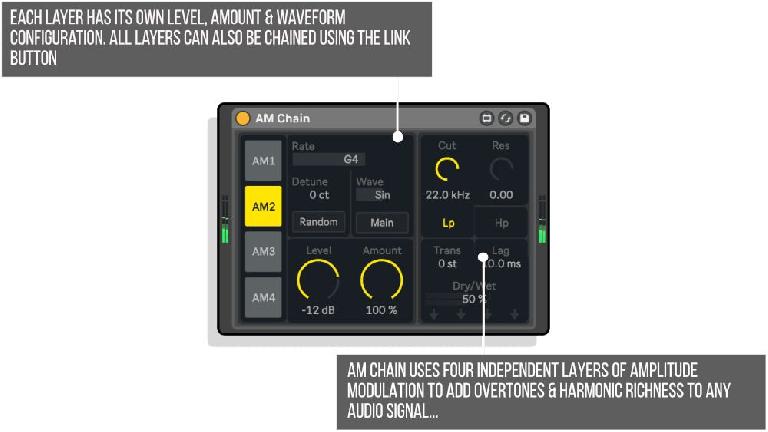 Each layer has its own level, amount and rate configuration. Their individual outputs can also be routed to the next layer before going directly to the main output.

Delay Chain is an audio effect that uses four delay layers, where time values are only defined using musical notes. For instance, if the selected note is A3/440 Hz, time will be equal to 2.27 ms, which corresponds to its period.

Add notes and chords to percussive sounds or compose complex patterns by setting a group of simple automations.

Each layer has its own level, feedback and time configuration. Their individual outputs can also be routed to the next layer before going directly to the main output.