All Articles Ableton Live
Melodic Step Sequencing with Ableton Push
Noah Pred on Tue, July 29th 0 comments
Language
The Ableton Push just keeps on giving. Not only is it a perfect companion in the studio and live for drum programming and note entry, it can also satisfy your melodic step sequencing desires.

Ableton's Push has already revolutionized the hands-on process of composing electronic music with its innovative scaled note entry and drum programming modes. The true beauty of this hardware is that it's designed to continue evolving with future firmware and software updates to Live'"and with their latest revision, they've added smooth, MIDI clip-integrated step sequencing. Let's explore.

First things first, we'll need to create a MIDI track in Live or directly from Push. For this tutorial, I'll use a basic instance of Live's Operator device, included with Live Suite. Select the corresponding track on Push, and in the event you were in Session View mode, press the Note button to access the normal note entry mode. Once in the standard note mode, pressing the Note button a second time toggles us into the Step Sequencer. 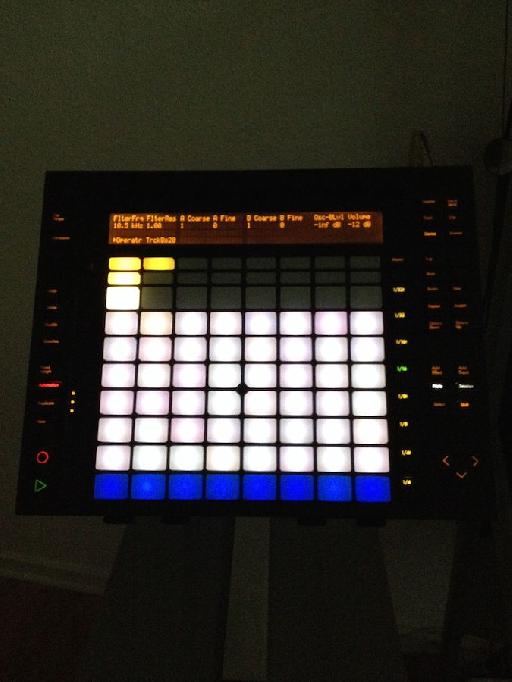 The wide open horizon of an empty step sequencer.

Our 64-pad grid is now divided into eight horizontal rows. The bottom opaque blue row is the root note of the selected scale, and the seven higher rows are the notes above it in the current octave of the scale. You can use the Octave Up and Down buttons to move to the desired register, or use the ribbon controller to scroll up and down the keyboard range in single note increments.

The top row of pads represents which bar segment we're looking at. You can strike one of these pads to view and edit that area of your sequence, double-tap one of them to loop the sequence to just that segment, or press two pads simultaneously to define a time range for your sequence, which will include any sections between the two pads you pressed. The green pad that scrolls through these during playback indicates which sequence segment is currently playing.

The default note setting for the step sequencer is 16th notes, but that can be altered by pressing a different note interval button along the right side of the pad grid. At the default setting, each vertical column of pads represents a single 16th-note step, in which case we can only view 1/2 bar at a time. Pressing the 1/8 button switches to 1/8th note steps, allowing for the editing of one full bar at a time.

Before I start entering any notes, I want to select a scale; if not, the Step Sequencer will enter notes in a C Major scale. Instead, I'll press the Scales button and select a Harmonic Minor scale in the key of G. 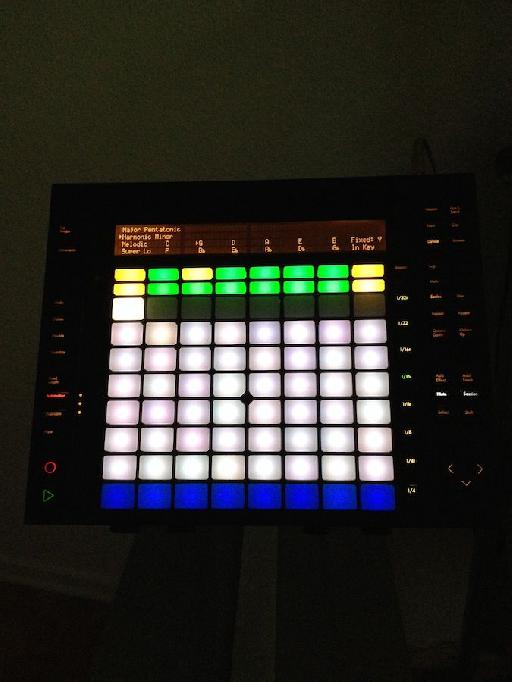 PRO-TIP: If you wish to have access to the full chromatic range of notes, you can press the bottom right of the top row of selector buttons while in Scales mode to switch out of In Key mode; the notes in the scale will be dimly illuminated in the step sequencer, while the chromatic notes become available between them'"yet remain unlit.

Now that we've got everything configured, it's time to start entering some notes. I've double-tapped the first locator so I can start by just editing the first 1/2 bar of the sequence. I can tap any pad in the note area to activate a note, and tap again to delete it; the default velocity for step-sequenced notes is set to 100. 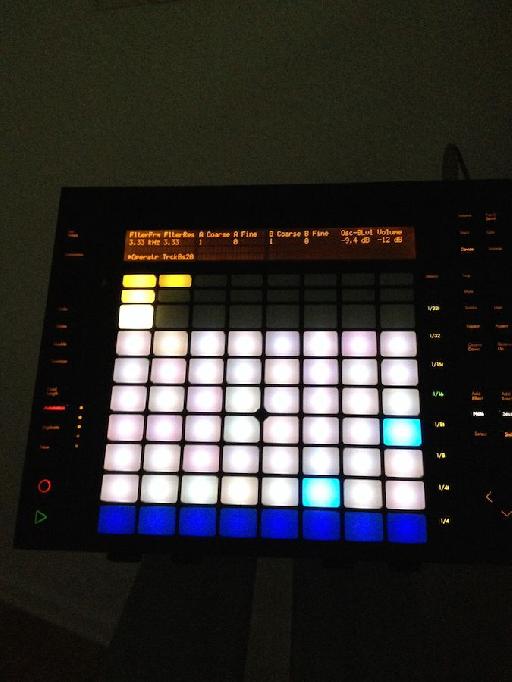 Multiple notes can be entered on the same step, meaning we can program chords'"and that's just what I'll do here, adding higher notes on each of my two steps. I want to make the first chord longer than the second, so I'll press and hold the two notes of that chord, giving me access to Nudge, Coarse Length, Fine Length, and Velocity'"all editable via the rotary encoders above them in the display. 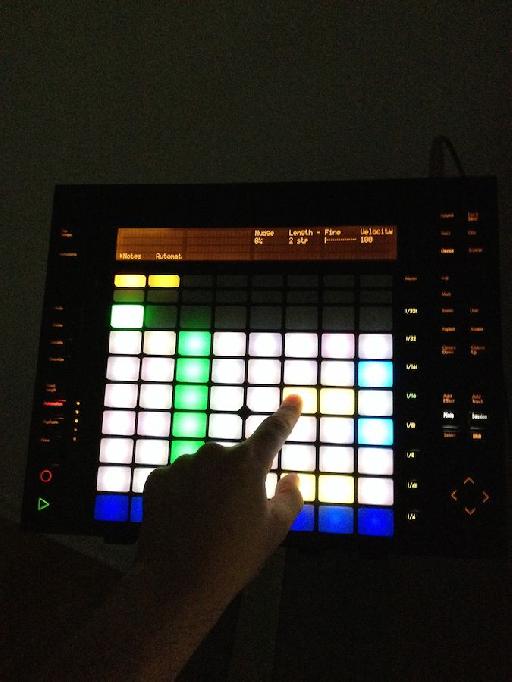 Changing the length of the first chord during playback.

PRO-TIP: If you want to enter your notes at maximum velocity, press the Accent button: all notes will be entered at full 127 velocity, glowing a deeper blue to signify the increased velocity amount.

Now that I've got a basic pattern going, I think it might be complemented by some lower notes earlier in the pattern. Before I add them, I'll press the Duplicate button to copy my idea to a new clip, which is now the one being edited. I'll scroll down an octave and play around until I find some notes to add. 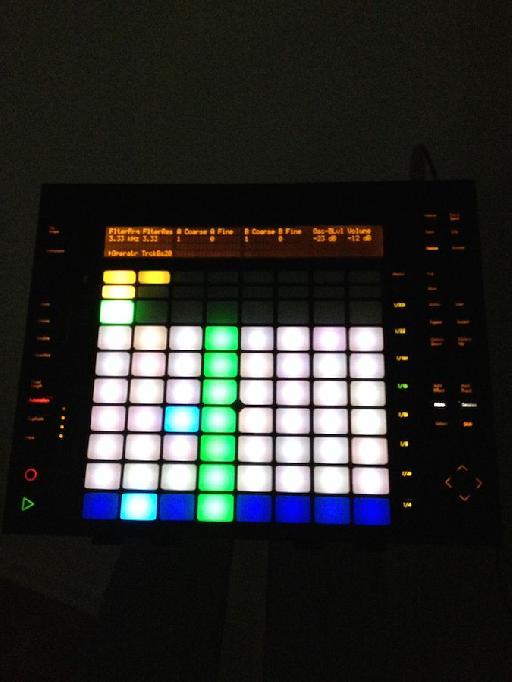 We're still only working with a 1/2 bar though, so now I'll hit Push's Double button to double the loop length to a full bar, then hit the second locator pad to edit the second 1/2 bar section, where I'll add another chord at a higher register that I've reached via the ribbon controller.

LISTEN 4: Another chord added in.

I'm still finding the results somewhat repetitive, so I'll Duplicate the clip again and then hit Double'"twice. We now have a four-bar loop. By pushing the last locator pad, I'll navigate to the final half bar of our sequence and enter one last chord, giving the loopy-ness a bit of relief. 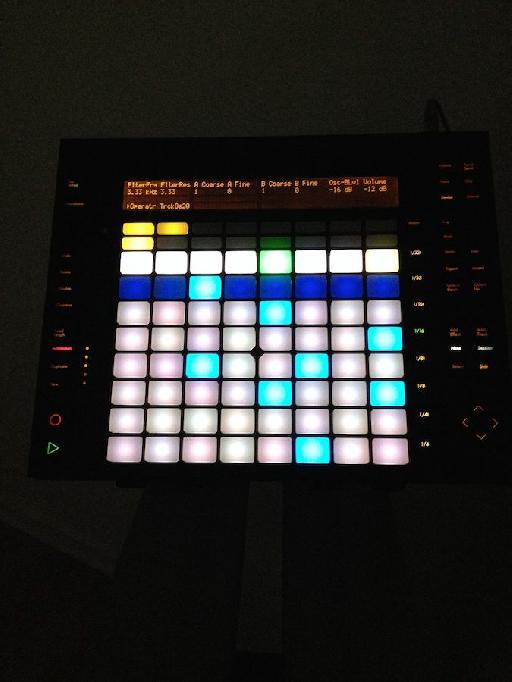 Focus on the final bar, with both new chords added.

PRO-TIP: You can toggle over to real-time scaled note entry by pressing the Notes button at any time; just hit the Overdub button to add new notes from this mode to your currently playing clip.

So where are all our lovely programmed sequences stored, after all? The true elegance of Push's step sequencer is revealed by heading back to Live, where we can see that everything we programmed via the step sequencer was captured in corresponding MIDI clips in the Session View of Live. 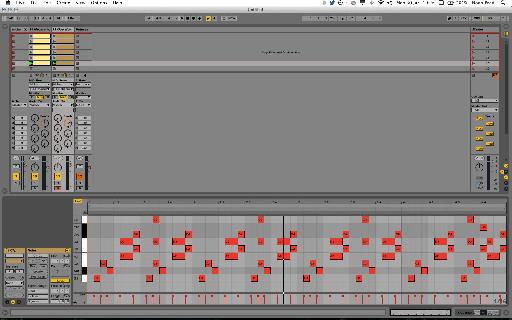 The final 4-bar sequence, as captured in our MIDI clip.

LISTEN 5: The full sequence for eight bars; note the added chord at the end of each four-bar phrase.

On stage or in the studio, Push's new step sequencer combines an inspiring tactile interface with seamless real-time DAW integration. We can't wait to see what their next update brings. 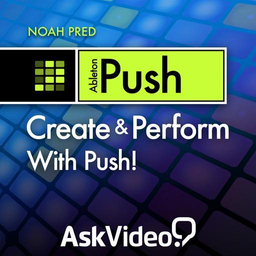