All Articles News
Motus is an Intelligent Wireless Musical Controller, Converts Motion Gesture to MIDI / OSC
Rounik Sethi on Mon, November 9th 2 comments
Language
Imagine a MIDI controller that fits in the palm of your hand that converts gesture and movement into MIDI/OSC and ultimately sound. Would you imagine this could be available for $100? It is.

TZM Creative Lab’s first product, Motus is what they call a Creative Motion Enhancer. A wireless device that converts motion to sound, Motus is “a creative tool for professional musicians, dancers and artists.” It’s available via a crowdfunding campaign now, for less than $100!

We’re going to skip to the juicy bits in the press release from TZM that cover how this super cheap motion controller works in a musical sense, and throw in a few videos from TZM Creative Lab which demonstrate it being used in the real-world.

OK. First off, there’s no tangible controls as such. Basically, it allows users to literally play music in the air. No keys, buttons or knobs. While holding Motus, users can play the note and at the same time change its timbre by using different motion gestures. They tell us that “each instrument can be played just as you would in reality. Motus technology tracks user’s free movements, extracts the most important motion features (e.g., velocity, dynamics, displacement) and maps them to different sounds. It can be a real-time generated sounds, prerecorded material or even sound and light effects. The size of Motus is optimal for easy handling and excellent control.” 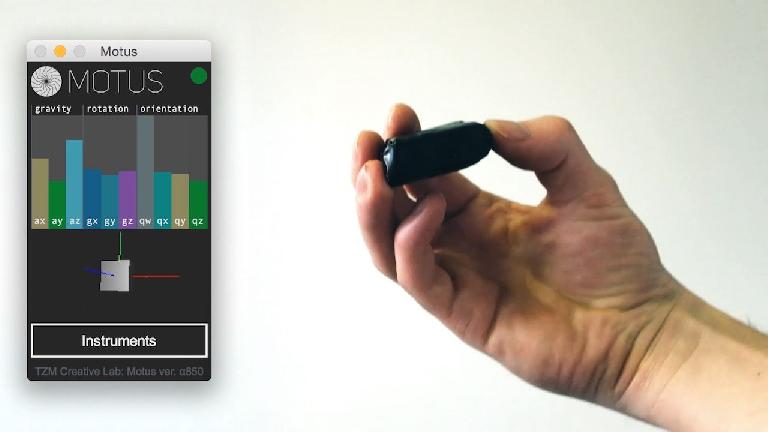 The Motus gesture controller alongside the Motus software.

“There’s tons of ways Motus can be used, e.g., dance, performing arts, or just having fun. With Motus, the space around you becomes a touchless surface, a canvas you can interact with and explore. Motion with Motus turns the air into a keyboard, fretboard, djembe skin, drum pads, violin bow, etc. The movement is a key to play and experiment with sound in real-time whether during casual time outdoors or on stage.” – said Mindaugas Badokas founder of TZM Creative Lab. “Motus is also, in part, about community. We seek to empower motion to open up more possibilities of creativity in sound exploration and gather the whole community which keeps that alive. Where anyone can take part from professional musicians to dancers, from grown-ups to kids (even 30 years-old kids).”

Motus Classic is out-of-the-box device and can be explored instantly by anyone. It provides full Motus experience, however it should not be used for professional applications.

Motus Pro is made for professional performers, it comes with an external Bridg receiver and precision sensors, its connectivity rage is up to 30 meters and possibility to connect up to 12 devices simultaneously. It is a perfect fit for using on stage and demanding tasks of any performance.

Motus Hacker is offered for the adventurous DIY enthusiasts seeking to make their own customized device, it comes without usual body and each part has to be soldered together by the user. Depending on added elements it may be used on stage, however this is highly variable, therefore it is not recommended for professional application but more for the experimentalists.

Motus comes together with its software, where users are able to select Motus instruments and play them instantly. It as well can be used as a controller with any DAW of choice—it is compatible with MIDI, OSC and ReWire. Ableton Live users will be provided with M4L device to make the set-up easier. Max users will be offered a pack of externals and abstractions.

We’re told Motus is a low-latency device, but of course would love to know and experience the low latency in m/s.

There’s 12 types of motion gesture currently supported, from linear acceleration, to twirls, gyro rotation, shake, velocity and 3D orientation. We’re curious to discover just how intuitive performing these gestures will be in the real-world…

Coolgarden – the app store for Motus

TZM Creative Lab will be opening a standardized platform, Coolgarden – app store for Motus. Coolgarden is a place where Motus users will be able to find all Motus instruments and creative applications. Therefore, developers are invited to develop Motus instruments and offer them for Motus users through Coolgarden. Developers can offer everything from synths, audio effects, visual generators or interactive games which can be monetized or free for users. 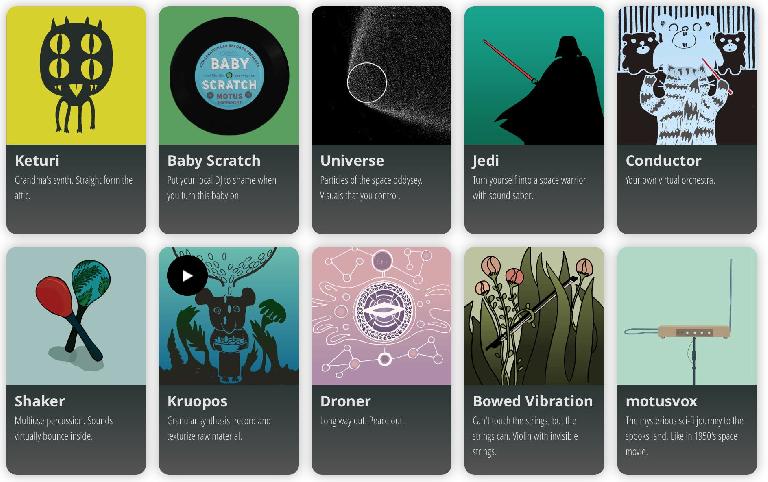 Make your own instruments for Motus using Max.

You can use the Max programming language to make your own sound synths, interactive art, live vsuals and more. Not familiar with Max? The good folk at TZM are going to be working on the PureData version shortly.

Motus was launched on a self-starter crowdfunding campaign on 21th of October. The company seeks to reach its crowdfunding goal of $28,000 in a 30-day period until the 20th of November. At the time of writing, Motus had reached $10,320. During a campaign Motus devices are offered for an introductory price starting from $80. First supporters will be able to purchase a limited number of devices for even more discounted price. The collected funds will be used for securing first batch of production: finalizing the product, setting up manufacturing and future development.