All Articles Review
Review: Max For Cats Pallas
G.W. Childs IV on Thu, August 10th 0 comments
The latest Max For Cats release is a semi-modular modelling synth that runs inside Ableton's DAW. But did it manage to win over G.W Childs?

Max for Cats made some big news recently, announcing Pallas for Ableton Live: a sick, semi-modular modelling synth with more than a few tricks up its sleeve. In this review, let’s take a look at Pallas and see if it’s the castle of sound you’ve been looking for.

I didn’t really know what to expect once I finally got the Pack of Pallas installed on my MacBook Pro. I deliberately avoided the walkthrough video, so I’d go in blind to the sound and expression of Pallas. Semi-modular can mean a lot of different things in terms of sound and functionality. Once I edge in to the first oscillator and bump down an octave, I begin to get the picture.

Pallas has the hum of a synth reminiscent of a Juno-106. The sizzle sits in that spot that says, “I want to play.” And as I lower the cutoff rotary of Filter 1 and introduce a little Filter Envelope Modulation… I give in. 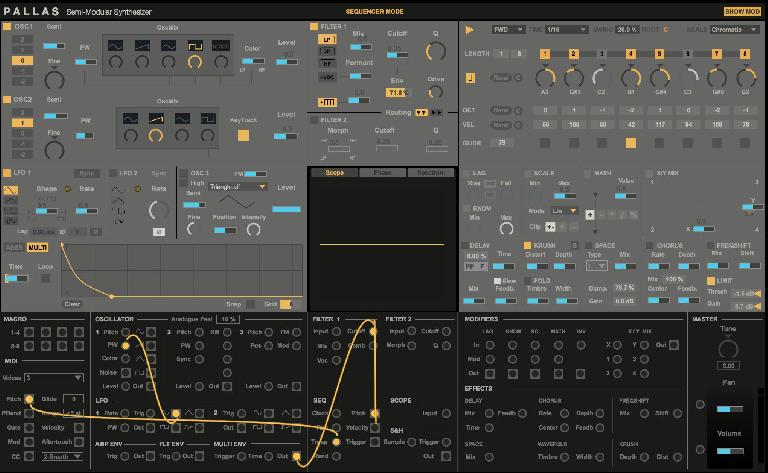 Semi-modular means one thing for sure, regardless of your definition: you can jump in and start playing. You don’t need to patch anything to get around in Pallas, and enjoy it. You can get in there, patch a little and blow your mind straight out of the water. But regardless of your patching ability, you will enjoy the sound and the show.

Three oscillators are each capable of affecting the overall sound in different and exciting ways. For example: Oscillator 3 is a Wavetable Oscillator with Frequency Modulation, where Oscillator 1 features multiple basic wave shapes that can be blended together, along with some additional noise that Oscillator 2 does not have. All parameters are accessible from the main panel and do not necessarily require patching. However, certain functionality can only be accessed through patching. One example would be supplying envelope modulation to the second filter.

In addition to the oscillators, Pallas is armed with two gorgeous filters. The second filter has really cool Morph knob that allows you to morph through the various filter shapes (HP, BP, LP NT) and the first filter offers the standard cuts, along with a formant and Comb filter, making the horizon of possible sounds from Pallas quite staggering. The Comb and Formant filter settings are both in addition to the standard HP, BP, LP cuts on the first filter and can be activated separately, or work simultaneously.

There’s a very useable sound library for those who are just interested in new patches to add to your collection. The basses are raw and will definitely have your listeners asking questions. There are also some really cool rhythmic patches that go a long way in showing what Pallas is capable of. I was particularly pleased with the pads, as they produce a wonderfully nostalgic melancholia very much along the lines of sounds you’d hear from bands like Foreigner, Toto and other cool 80s bands.

Pallas is a huge pack addition for Ableton, and I think it really has something special, especially considering the price. It’s a great beginner synth, beyond being a great Max For Live creation, as it lets you start off with the basic interface, and never forces you off the yellow brick road until you are ready. The diverse and helpful bank of presets are great for modern television, film scores and current radio hits. If you have a chance, check out the demo. Sadly I was not able to get the optional MIRA Editor that can be utilized over mobile devices as well as other laptops. The address I was supplied never seemed to work in the multiple network configurations that I tried. And as there appears to be no documentation yet I couldn’t really troubleshoot it. But I don’t expect this will be a problem for long, thanks to the internet!

Pros: A mighty Max for Live synth that rocks a strong preset selection, and invites a wide range of further sound possibilities through the animated patch panel, and a really sick step sequencer.

Cons: Max for Live required. Could not get the optional mobile editor to work. No documentation yet. 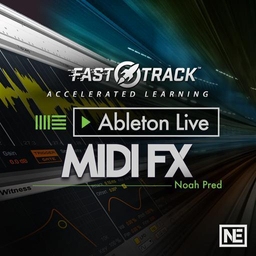 Dream It. Do It.
Do you want to learn Live's MIDI FX?
Yes, I want to learn!
No Thanks, I just want to read the article.
Feedback
How are we doing?
We'd love your thoughts, feedback and questions regarding our new site. All feedback is appreciated!
We do not respond to this form! If you need support, please visit our support page.
Thank you for your input!
Your message has been successfully sent
Course Advisor
Don't Know Where To Start?
Ask A Course Advisor