All Articles Review
Review: touchAble 3, the Ultimate iPad Controller for Ableton?
Noah Pred on Tue, December 23rd 0 comments
Language
If you thought controlling Ableton Live using your iPad had to be serious and limited, think again. touchAble 3 redefines how useful an iPad can be... and how fun it can be as an Ableton controller.

Ever since the iPad first came to market, it held the promise of revolutionizing DAW MIDI control with affordable touch screen interactivity. Since then, numerous Ableton Live control apps have found their way to market offering a range of functionality primarily geared toward session view control. With the third version of their highly flexible Live control app, touchAble attempts to close the gap between mere control surface and full-fledged creative tool.

From the outside it might seem little more than a minor enhancement, but right off the bat, touchAble 3 cleans up in the usability department by finally offering a hard-wired connection to Live.

While previous versions of touchAble and other options on the market tend to require convoluted wireless networking configurations, touchAble 3 for the first time allows you to easily connect your iPad directly via standard USB port. Not only is it easier, it's also far more reliable'"making it considerably more feasible for use in a live performance, where a network dropout could be disastrous.

Downloading the native connection application and setting up the app to work with Live was far easier than I anticipated: a welcome surprise indeed compared to past experiences routing ad hoc networks and troubleshooting IP addresses instead of making music.

You can now hide and show Live's browser via a handy button located along the transport at the top of touchAble's interface, so you can comfortably navigate and select instruments and effects with a swipe and a tap. Just create a new track via the transport's add button, and drag the desired device from the browser.

Once you've got a new track, there's a Push-style 64-pad note grid that can be forced to a wide selection of scales'"seemingly the same as those included with Push. While not the revelation Push first was, the format certainly encourages the same kind of creative spark. Naturally, the last selected scale and key will remain in place for MIDI recording on new tracks, keeping everything in harmony across your project. The note entry area also comes equipped with a drum pad mode, note repeat functionality, a pitch wheel, aftertouch sensitivity toggle, and even a makeshift velocity sensor despite the glass screen.

Meanwhile, editing MIDI clips is fun as ever, since the MIDI editor gives access to all the primary functions of Live's own MIDI editor, along with ability to force the note grid to a selected scale'"an intriguing and highly useful function that left me wondering why Ableton hadn't implemented it yet in the DAW itself. 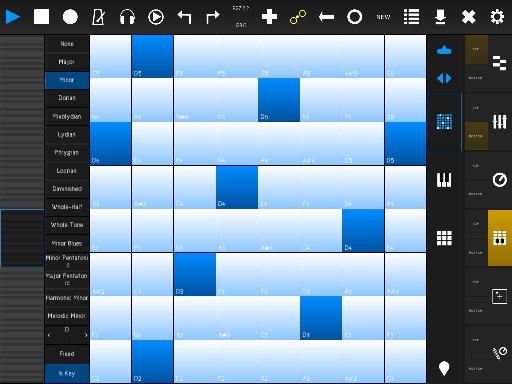 Add on the Live Device Template Pack (available as an in-app purchase for an additional $21.99 USD), and you can control all of Live's devices intuitively, via touch, right there on your iPad: Operator, Analog, Chorus, Velocity, you name it'"all there for instant touch control. Along with helpful navigation tools, there's some innovative features as well, such as the parameter snap: with snap mode engaged, you can pull a parameter to extreme values after which it snaps back to the previous parameter value when released'"an elegant feature on the touch screen resulting in elastically expressive gestural control. 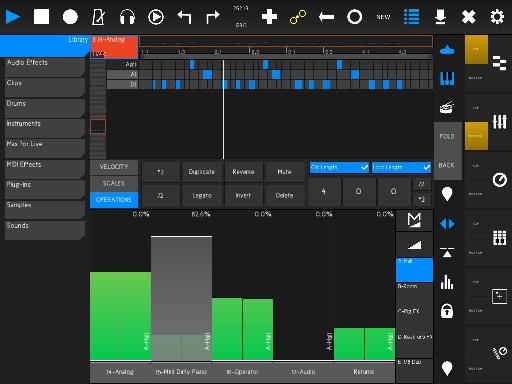 The MIDI Clip Editor in the top half split with the track sends mixer at bottom; browser visible at left. 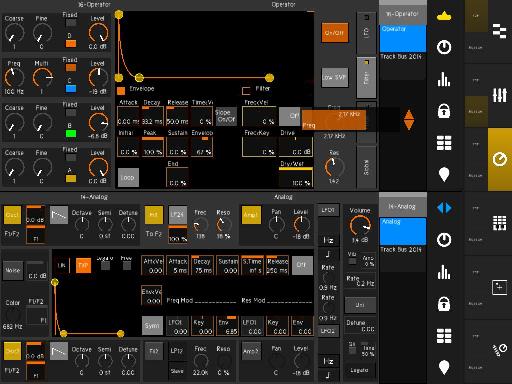 The device view split between Operator up top, and Analog below.

The touchAble session view control is impressively endowed, to say the least. With a full color clip grid and transport control'"including clip record, automation enable, add new scene and other key Live features, you'll be ready to build sets and studio sketches in no time. The navigation controls ensure you can find your way around quickly as well, while the beat jump function allows for quantized retriggering of clips on any track, at any time, directly from session view'"without fussing around with clip or device parameters. The result is a quick and addictive beat juggling solution.

The XY pad area lets you choose three parameters from anywhere in your set'"one for each X, Y and Z axis'"for up to four 'dots' that can be dragged or bounced around the screen. All four dots can be controlled simultaneously for extreme twelve parameter morphing, or in momentary mode, just the active dot can be moved, jumping back to its initial position upon release.

You can arm a dot so that it will be the first one to respond to your touch, while a snapshot mode can be activated to morph parameters from one state to the next over an attenuated period of time. Various XY pad states can be saved and loaded to banks. With quick access engaged, you can access up to 8 bank slots at once to easily switch between different sets of parameter control.

XY pad movements can even be recorded, played back, looped, and even looped in reverse. Making things even more interesting, each dot can be pulled naturally in certain directions based on the gravity control, which gets even more interesting with 'bouncing' engaged: dragging a dot now continues to move it even after you've released it, with the gravity control determining where it continues to bounce around the XY grid.

Not only can you select any parameter throughout your set for control via the XY mode, you can even assign MIDI CC values to control external hardware.

Beyond the inspiring tool set detailed above, touchAble offers a full-fledged template editor for advanced users looking to devise their own touch interface controls. In addition, each of the control modes can share valuable screen real estate with another mode via the split screen feature. Take into account that multiple iPads running touchAble can be connected to make a giant mega controller, and the possibilities for innovative interface configurations expand exponentially.

For anyone who's been frustrated with the wireless instability or general limitations of previous Live control options for iPad, touchAble is a powerful, stable, and inspiring control surface that should be considered a bargain at its current price.