One function that Ableton has brought back into my life in a great way is sampling. For a long time there, once I'd jumped fully on the virtual instrument bandwagon, I simply gave up using samplers. It wasn't until I discovered the remarkable, little Simpler instrument in Ableton, and its '˜simple' way of working, did I begin re-implementing sampling back into my music.

After all, what's simpler than just grabbing a recording of a synthesizer and, literally, dragging it in to Simpler? But, once you do this, you're reacquainted with some of the drawbacks of sampling.

In this simple tutorial, I'd like to show you some way to breathe some life in to sampled synths in Ableton.

For my sample, I'm going to use a basic sawtooth that I've recorded in the key of C. There isn't much special about it. It's just a regular, old sawtooth waveform being doubled with another sawtooth, and some slight detuning. Take a listen...

Now, I'll drag my audio clip, that contains my synth recording in to Simpler. 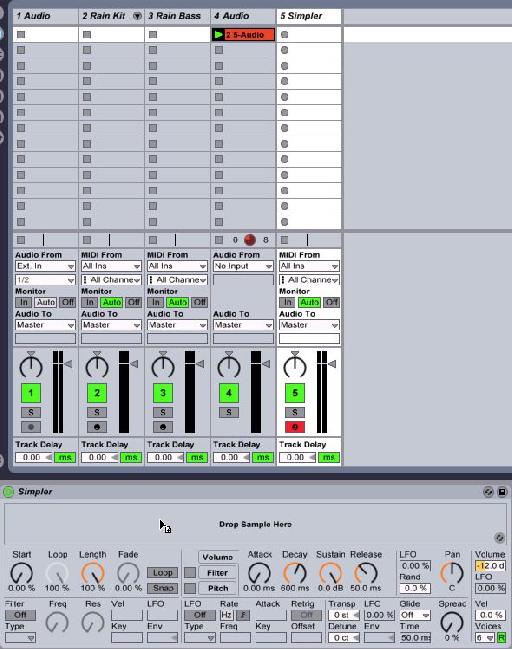 For getting some big synths, you'll rarely find any other device that will stand up to a Chorus for overall depth and '˜phat'. Because Chorus adds additional detuning, in controlled amounts, the synth automatically sounds much wider. I'll drop one on to my track with Simpler, right now...

Even in the default settings, it already has a much bigger sound, but it's just a hair washed out.

I'll pull back on the Chorus '˜Mix' knob, just a small amount, so that I get a little more of the original synth source. Forty Five percent will be perfectly adequate... 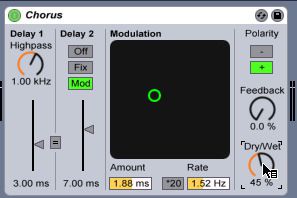 Before adding anything else, I'll program a sequence for my Simpler to determine what's missing and where it will end up in my mix. Will it be above, like a lead, or lower, like a bass. These are very important considerations when sculpting sound.

As this is turning into, what my ears tell me, is a lead, I'll use Simpler's filter in High Pass mode so that I make a little space for other instruments. The source audio was already big, with the Chorus, it's even bigger. Shelving off some of the low end will make room for drums, bass, etc. Keep in mind, there's no rule for how much you cut, just don't make your sound too thin, and make sure that other sounds are able to sit pretty in your mix.

Step 4- Delay for Some Air

After listening to what I've got, a smidge of slapback echo wouldn't hurt. In fact, it would add a little bit of chaos in, and make the sampled synth sound a little more '˜real'. To do this, I'll add in the Simple Delay in '˜Link' mode and set the Beat Division to '˜1'. This will cause the echo simpler creates to be very fast, almost unnoticeable.

Finally, I'll turn the Mix back to 30%. With this setting, you get a little bit of delay, but only enough to accent the sound. This also helps in differentiating the lead from other, more plain parts of the song, like bass, etc.

Alright, let's take a listen to a part of the full track now...

Nice, a really clean lead that fills up the song, and works well with the bass part... Another sampled instrument.

Remember, when working with sampled sounds, there are no set rules! Have fun, and try coming up with some techniques of your own. And, don't forget to save those patches for later!