All Articles News
This Ableton Live Sequencer Creates Music Patterns based On Animal Population Behavior Equation
Rounik Sethi on Tue, July 3rd 1 comments
This free Max for Live sequence generator isn't like any other sequencer. Based on an equation that models animal population behavior it creates compelling or chaotic IDM sequences in Ableton Live.

Logisitic isn't an easy Max for Live sequencer to write about, but it's a lot easier and more satisfying to play with.

What makes LOGISTIC stand out from the crowd of other seqeuncers is that it utillises a very different chaotic model. In fact, it's perfect for IDM and music that really plays away from the traditional four to the floor. Logistic is based on an equation that predicts animal population behavior, also called the Logistic Equation. Despite its simplicity, the logistic equation can generate complex behavior that becomes chaotic (you can find more details here).

This sequencer was initially made by, and for, Marco Cisi (also known as hate fish). He tells us he is quite interested
in IDM and has created many “weird” melodies and atmospheres in the genre with tools like LOGISTIC. 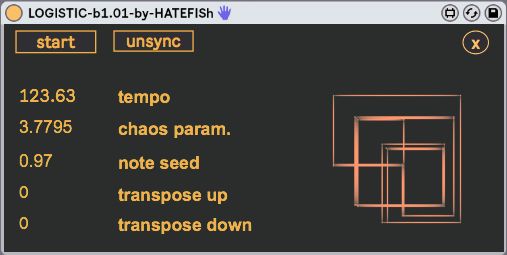 After experimenting with LOGISTIC Marco decided to share it and added a cool “screen” to visualise what is going on under the hood.

He tells us "the most important parameter of LOGISTIC is the “chaos parameter”. For values < 3 the LOGISTIC outputs repetitive sequences but, for values > 3.57 LOGISTIC becomes unstable and generates chaotic sequence. The interesting thing is that the sequences are not random, they tend to stay as close as possible to a trajectory, this way LOGISTIC generate sequences that sounds more like subtle variations.

We think LOGISTIC is a very interesting and inspiring musical tool for Ableton Live users. What do you think? 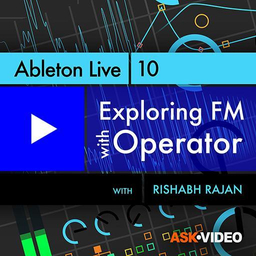 Dream It. Do It.
Do you want to learn Exploring FM with Operator?
Yes, I want to learn!
No Thanks, I just want to read the article.
Feedback
How are we doing?
We'd love your thoughts, feedback and questions regarding our new site. All feedback is appreciated!
We do not respond to this form! If you need support, please visit our support page.
Thank you for your input!
Your message has been successfully sent
Course Advisor
Don't Know Where To Start?
Ask A Course Advisor