All Articles After Effects
After Effects: Creating A Winter Snow Scene
Richard Lainhart on Mon, December 19th 0 comments
Language
The chances of a white Christmas (in even the warmest of climates) just got a whole lot better... Richard Lainhart shows how to create a festive snow scene greeting video in Adobe After Effects.

Well, it's time for the year-end holidays here at macProVideo, and in honor of the season, here's a quick tutorial on creating a snowy animated holiday greeting in Adobe After Effects.

Step 1 - Set Up the Project

For our animated holiday card, we're going to use a snowy background image, have some snow start to fall slowly into the frame, as if it's just begun snowing, and then fade in an appropriate greeting. So, I'll be working in a 640x360 comp of about 20 seconds, to give the snow plenty of time to fall, and for my background image I'll use a holiday season shot of my house I found in my archive. 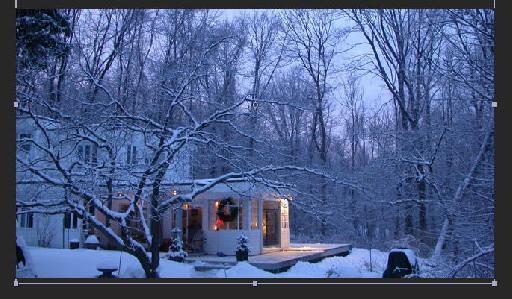 As our background image, we don't need to animate this, so we'll just drop it in the comp and make it last the entire comp length.

Next, choose Layer > New > Adjustment Layer to add an empty layer to which we'll apply our snow effect. We could apply the snow effect directly to the background image, but because the snow effect we'll be using just starts immediately within the frame, we won't be able to have the snow begin above the frame and fall into it. By putting the snow on its own layer, we can animate the position of the layer down into the frame to begin the snowfall.

Next, with the adjustment layer selected, choose Effect > Simulation > CC Snow. CC Snow is a particle system, one of a class of effects called procedural animators. What this means is that rather than setting keyframes to create change for each individual particle (or snowflake, in this case), you specify general rules, or procedures, to have groups of flakes change independently with slight variations.

If you preview the Snow effect without changing any of the settings, you'll see this:

It's a nice effect, but the snow is falling too fast (we want a gentle drift) and as I mentioned, it starts right in the frame, rather than falling down into the frame. Let's fix that next.

On the first frame of the animation, set your CC Snow settings to these values: 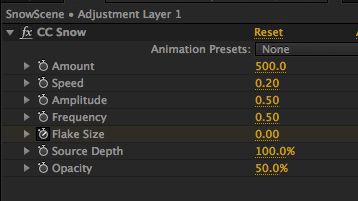 At this point, you won't see anything, because the Flake Size is set to zero. So, set a keyframe for Flake Size at time 00:00, move ahead to five seconds, and set the Flake Size to 1.5; this will make the flakes grow from nothing to a reasonable size.

Now, if you preview, you'll see that the flakes drift nicely, but they fade into the frame, rather than drift down from above. So, select the Adjustment Layer itself, type P to solo its Position, set a keyframe for Position at 00:00, and drag the whole layer up and out of the frame. Move ahead to five seconds, and drag the layer back to its original position to animate it down into the frame. Now we have both a slow drift of flakes and the impression that the snowfall is just beginning.

Next, we'll animate some greeting text: Select the Type Tool, choose a font and color (I'm using Apple Chancery for the font, which has a nice holiday feel), click in the Comp window, and type in your message. This will create a new text layer above the Snow layer.

Once you have your text placed, add a drop shadow to it (Effect > Perspective > Drop Shadow) to help it stand out a little more against the background. Finally, move ahead to 5 seconds, set a keyframe for Opacity, and set the Opacity to zero. Move ahead to 8 seconds and keyframe the Opacity up to 100%, so the text fades in slowly after 5 seconds to reveal your greeting.

Our final step is to add a second snow layer with a few larger flakes in front of the text to create a little more sense of depth. So, add a second Adjustment Layer above the text layer and apply CC Snow to it. Set your parameters as shown below: 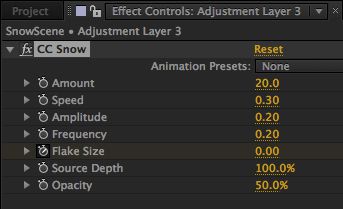 As before, start with a Flake Size keyframe of zero at time 00:00, but this time animate it up to 5 at the five-second point. Since we have only a few large flakes, we don't need to animate the layer itself. Render the whole thing out, and here's what you'll get:

And Happy Holidays from all of us at macProVideo and The Hub!