All Articles After Effects
After Effects Tutorial: Animating a Spray Paint Stencil Logo Part 1
Richard Lainhart on Wed, May 11th 2 comments
Language
In this 2-part Quick Tutorial, we're going to show you how to animate the effect of a logo being stenciled onto a surface with spray paint in After Effects.

In this 2-part Quick Tutorial, we're going to show you how to animate the effect of a logo being stenciled onto a surface with spray paint in After Effects. For extra fun, we're going to film the final animation in 3D space with a moving camera.

We're going to demonstrate this with simple solid layers that don't require any external files, so we can do it entirely in After Effects, but for greater realism, you're welcome to import your own clip art surface textures to replace my generic Wall and Cardboard layers. Let's get started.

Step 1 - Set Up the Stencil 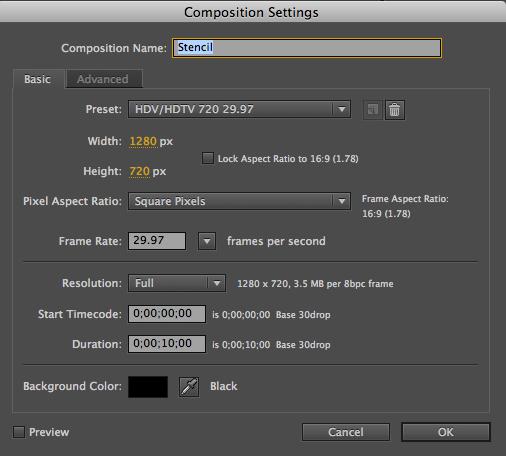 Make new a Solid, the duration of the comp, 500 pixels wide by 200 tall, make the color a '˜cardboardy' color - a dark reddish-orange should do it - and call it Cardboard: 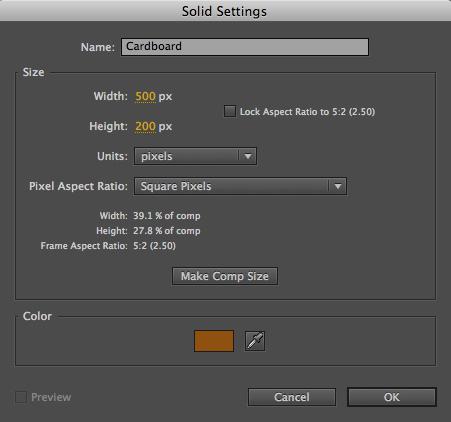 Then select the text and set it to a large sans serif font as shown here (the color isn't important, as it won't be seen in the final animation; I've made it green here so it's more obvious.):

Select the text layer and set its Mode to Silhouette Alpha (click the Toggle Switches/Modes button at the bottom of the layer window to show the Modes column):

This will make the text transparent and punch a hole through the alpha channel of the layer below it to the background, which we'll use later to our advantage:

Make another new 10-second 720p comp with a black background, and call it Spray Paint. Add a new comp-sized solid to the Spray Paint comp, make it a medium gray, and call it Wall: 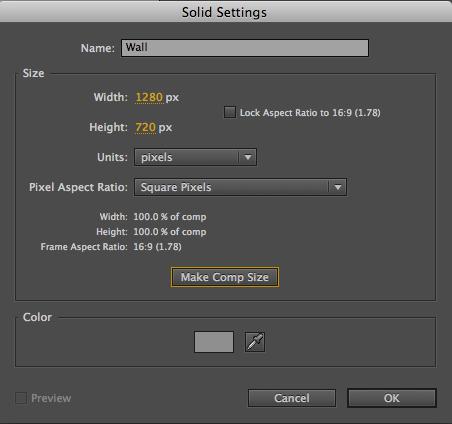 Click its lock icon to lock the Wall layer and prevent it from being moved. Then drag the Stencil comp into the Spray Comp, above the Wall layer. You should see something like this in your comp window:

Click the Enable 3D Layer buttons (the cubes) for the Wall and Stencil layers:

These settings will give us a large soft brush that will simulate spray paint flow. The low Spacing value will separate the brush strokes a little for a more open spray.

Set the Paint options, in the Paint palette, as shown: 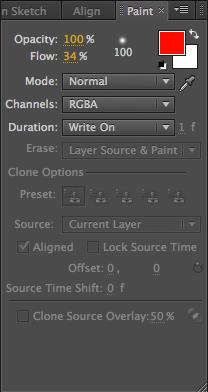 I've made my paint a bright red, but you can use any color you like, of course. Setting the Flow to a relatively low setting gives a more open, less continuous paint flow, more like spray paint than a brush. Setting Duration to Write On means that we can paint in real time and Paint will capture the strokes, then let us play them back in the Timeline - perfect for spray-painting.

So, with your Timeline set to Frame 0, click with the brush on the Stencil layer and start dragging the brush around, in one continuous stroke, to fill in the letters - Paint will capture your stroke as you drag. Include a little overspray for extra realism. When you stop dragging and release the mouse, the capture will stop.

With a little practice, you can readily simulate spraying paint. If you make a mistake or don't like your work, Undo and try again. Aim to finish your spraying in 6-7 seconds, so we have a little room at the end of the timeline for the rest of our animation. You can preview your spray right in the Layer window. When you have a capture you like, go back to the Comp window and preview. You should see something like this:

OK, that's a good place to take a break. In Part 2 of this tutorial, we'll set up the masking for the spray paint stenciling and create the final animation. Join me there and you may like to check out my After Effects Video Tutorials.

Richard Lainhart
Richard Lainhart is an award-winning composer, filmmaker, and author. His compositions have been performed in the US, Europe Asia, and Australia, and recordings of his music have appeared on the Periodic Music, Vacant Lot, XI Records, Airglow Music, Tobira Records, Infrequency, VICMOD, and ExOvo labels. His animations and short films have been shown in festivals in the US, Europe, and Asia, and online at ResFest, The New Venue, The Bitscreen, and Streaming Cinema 2.0. He has authored over a dozen technical manuals for music and video hardware and software, served as Contributing Editor for Interactivity and 3D Design Magazines, and contributed to books on digital media production published by IDG, Peachpit Press, McGraw Hill, and Miller Freeman Books. Previously an Adobe Certified Expert in After Effects and Premiere, a demo artist for Adobe Systems, and co-founder of the official New York City After Effects User Group, he was, from 2000-2009, Technical Director for Total Training Productions, an innovative digital media training company based in New York and California.
Related Videos
Comments (2)