All Articles After Effects
After Effects Tutorial: Music into Motion
Joshua Casper on Sun, December 4th 0 comments
Language
Making motion graphics in Adobe's After Effects is a blast. Syncing those animations to music or sound FX is just next level. Joshua Casper is on hand to show you how.

In this tutorial, I am going to show you three ways of syncing your animations to a music clip in Adobe After Effects. We will start off with the basics of getting the audio transformed into key frame data on a crude level, then go into a more precise method and rounding things out with some advanced ideas.

This method will work if you are looking to have an animation move in conjunction with the amplitude of the source audio file. It is fairly crude, but simple and quick, and can be useful in a number of situations.

What you want to do is drop your audio file into a composition and right-click the file name. Then find the “Keyframe Assistant” menu item, then click “Convert Audio to Keyframes” from its submenu. 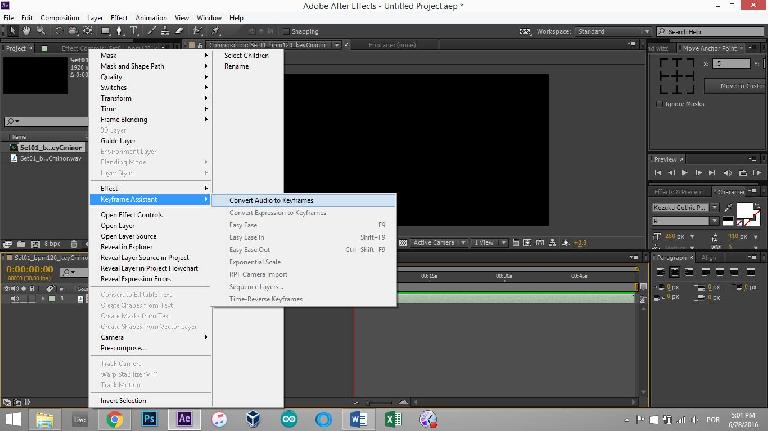 This will generate keyframes for each frame worth of audio. A slider effect will be applied 3 times on a null object. There will be sliders labeled as “Left Channel”, “Right Channel” and “Both channels”. Usually you will want to delete the Left and the Right and just use the “Both” Slider. 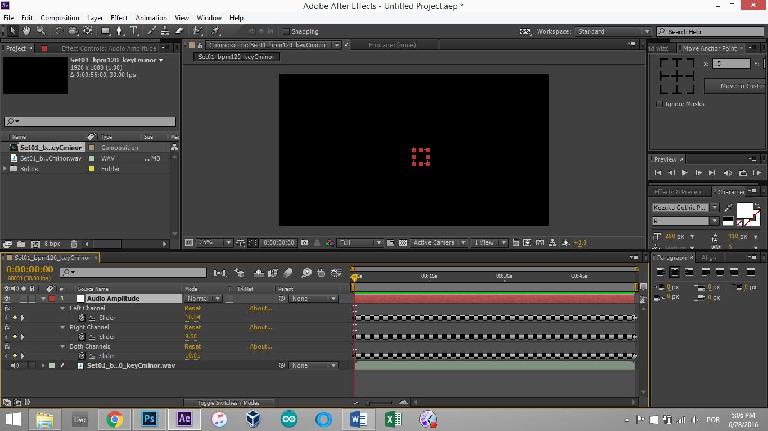 Now you can take something, like the size of a shape, and parent it to that keyframe data. So, what I’ve done is made a new shape layer containing a star. I find its Size parameter, by selecting the layer and hitting “S” on the keyboard, and Alt-click the stopwatch. This allows me to parent the star’s size to the keyframe data of the knoll object. Now if you scrub through you should see the star changing size with the audio amplitude.

There might be a problem though, depending on how large you made the initial shape and how much movement you want there to be. The audio amplitude data numbers could be quite small. So, click in the Star’s expression box, where the parenting action has created a new expression, and add a *5 just before the semicolon. This will beef up the size transitions.

This is quite popular on music promo channels on YouTube. I am certain you have seen it before to some degree or another. This effect reacts similarly as the amplitude effect we just accomplished, but uses the audio’s frequencies as drivers for animations.

First thing to do is import your music. Then make a new composition and drop the audio into it. Next create a new solid. The color doesn’t matter. Then, with that new solid layer selected, add the effect “Audio Spectrum”. That can be found by typing in the Effects panel, or in the main menu under Effects -> Generate -> Audio Spectrum. It might be a good idea to label the layer as Audio Spectrum at this point. 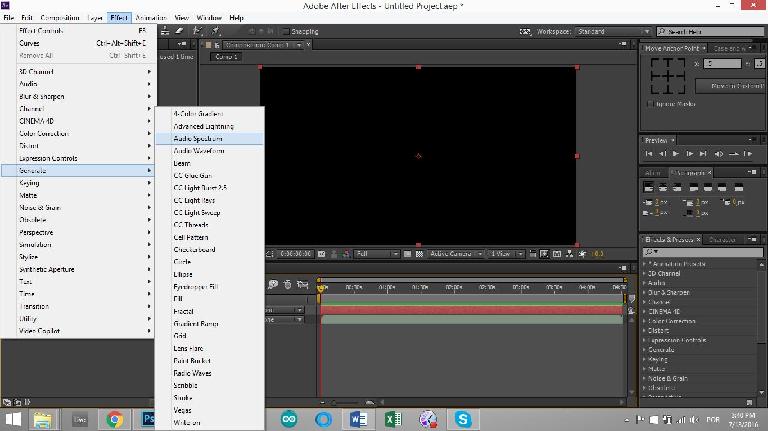 As soon as the effect is applied the solid will disappear and you will see what looks like a bunch of evenly spaced pink dashes going across the middle of the composition.

The first thing you want to do now is point the effect to the music file. You can do that by the drop-down menu in the Effects Control Panel. 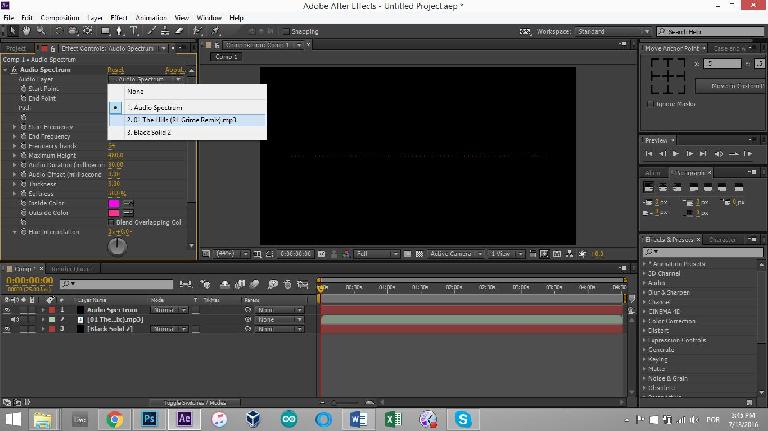 Now if you RAM preview the comp you will see a bit of movement from the lines by means of growth in height in accordance with the music. As of right now, it isn’t too pretty. But we can fix that. Let’s walk through some of the key points in the effect’s Control Panel to see what we can do. 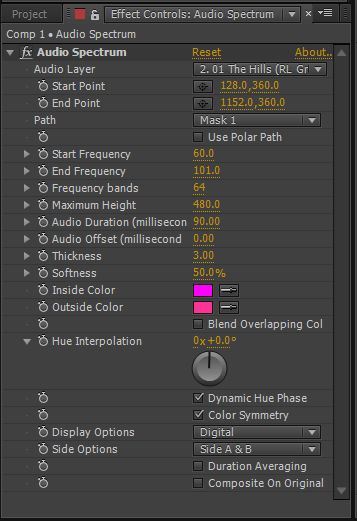 The start and end point parameters are pretty self-explanatory if you are looking to use a straight line. However, you can have the spectrum follow a “path”. For that we will use a mask. For example, a circle.

With the Spectrum layer selected, click the circle mask tool. With cmd/ctrl held click and drag out a circle. The cmd/ctrl will keep it a perfect circle. Then use the align tools to center it. Next go back into the FX control panel and select “Mask 1” from the Path drop-down menu. The spectrum will now be a circle instead of a line. 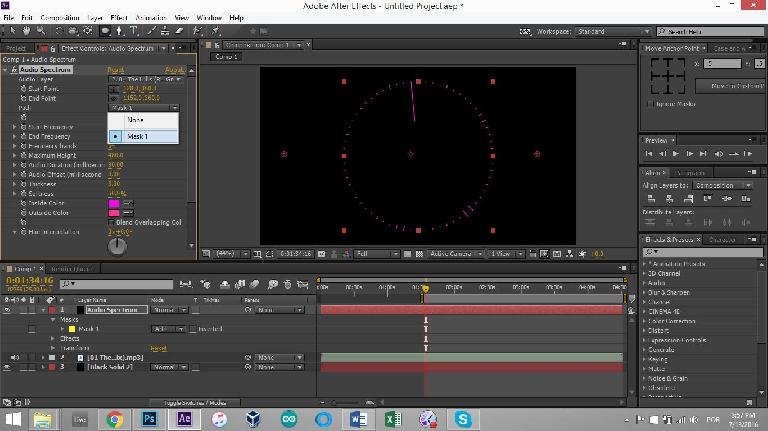 Now you might notice that the mask is clipping off some of the spectrum. No problem. Go into the mask settings and click the “inverted” option.

The next three parameters in the FX control panel have to do with frequency. The first is the frequency at which to start analyzing the sound. You can adjust this to fit the style of music you are using. Maybe around 30–60 Hz is a good place. Then choosing the end frequency will depend on how much movement you want in your animation. If you leave it at 2,000 there will be less movement towards the end and more movement towards the start. The next parameter is how many bands to use.

I suggest playing with these three parameters towards the end of the process to get the best/desired results.

From there we can jump down to the colors and change them to whatever works.

The last thing that I want to direct your attention to for this tutorial are the Display Options and the Side Options.

The Display options change the spectrum style. You can choose between Digital, Analog Lines and Analog Dots.

The final thing that might be useful are the Side Options. By default, the audio spectrum with be on both sides of the path. This parameter allows you to make it just on the outside of the circle or just on the inside or, if you are using a line, the top and bottom.

As you can see there are a few more parameters in there, but what I have shown you is enough to get you started. I suggest playing around wih the other ones as well to see what changes they produce.

A cool thing to do might be to set up the initial audio spectrum layer and then duplicate it a couple times. Changing a few of the parameters and the Display Options. Maybe adjusting the opacity of a couple of instances. Now that you know the basics you can get as creative as you want!

Learn After Effects in these video courses at macProVideo.com
Related