All Articles After Effects
Animating a Spray Paint Stencil Logo with After Effects Part 2
Richard Lainhart on Sat, May 14th 0 comments
Language
In the first part, we showed you how to create the basic stencil layer and paint on the spray paint in real time. In Part 2 of this tutorial, we'll be setting up the masking for the spray paint stenci

In this 2-part Quick Tutorial, we going to show you how to animate the effect of a logo being stenciled onto a surface with spray paint in After Effects. For extra fun, we're going to film the final animation in 3D space with a moving camera.

In the first part, we showed you how to create the basic stencil layer and paint on the spray paint in real time. In Part 2 of this tutorial, we'll be setting up the masking for the spray paint stenciling and then create the final animation. Join me there.

We're duplicating the stenciled layer because we're going to remove the painted Cardboard stencil to reveal the stenciled logo and overspray. To do this, we need two layers and some clever alpha channeling.

Step 9 - Set Up the Stencil Masking

Select the Top Stencil layer, and apply the Set Matte effect to it (Effect > Channel > Set Matte). Set Matte will let us use the alpha channel, of this or any other layer, to mask the entire layer to which it's applied. We'll use this to mask one layer with another, as you'll see.

Set the Set Matte parameters for the Top Stencil as shown (pretty much the default settings):

Apply Set Matte to the Bottom Stencil layer, and set it up as shown:

Note that the only difference in the settings is that Bottom Stencil has its Alpha matte inverted. In both layers, because we applied Set Matte after Paint, the layer's alpha channel will mask the Paint layer as well. With these alpha Set Matte settings, the Top Stencil layer will only show the paint within the Cardboard layer, while the Bottom Stencil, with its inverted Alpha channel, will only show the paint outside the Cardboard area. When we remove the top layer, the revealed bottom layer will show only the masked paint. You'll also notice that the interaction between the masking of the two identical layers creates a faint outline around the painted letters, adding a little extra dimensionality to the paint and cardboard stencil.

Next we're going to animate the Cardboard layer out of the way to reveal the sprayed paint and logo. With the Top Stencil layer selected, move your CTI to 6 seconds or so, or just past where you finished painting, and enable keyframes for Position and Orientation. The values at this point in time should be as shown here:

Move ahead about 15 frames and set the values as shown here:

In the Timeline, select the first keyframes for Position and Orientation, Control-click on them, and apply Keyframe Assistant > Easy Ease Out to them: 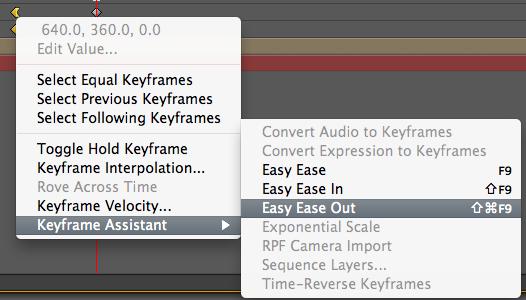 This should give you a nice smooth falling outward and downward of the Cardboard layer, taking with it the paint on its surface and leaving the painted letters and overspray behind. Add some Motion Blur to the falling layer:

and you should see a smoothly falling stencil that reveals the paint:

FInally, for added realism, we're going to add a camera and light to firmly put the animation in 3D space, and we'll animate the camera for more fun. So, choose Layer > New > Light... and give it these initial settings: 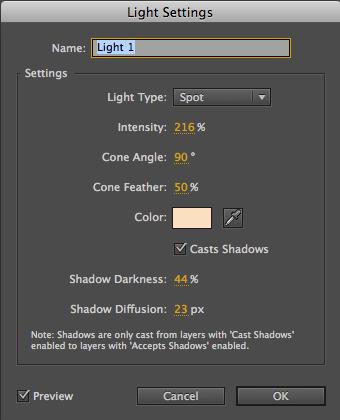 Twirl down the Properties for the light in the Timeline, and set them to these values: 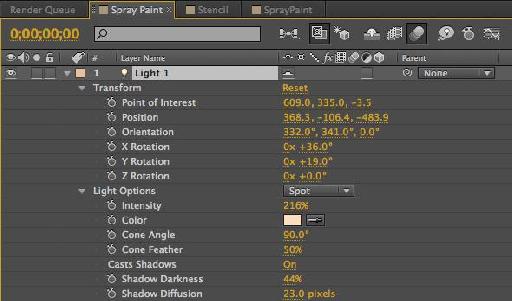 Add a new Camera (Layer > New > Camera...) and accept its default settings. Open up its properties in the Timeline and set them, at Frame 0, to these settings: 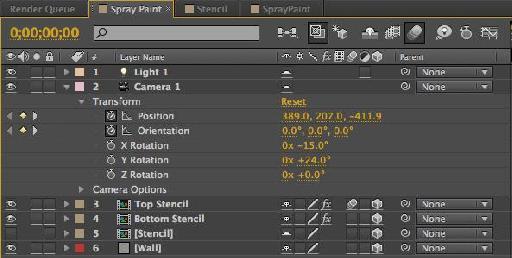 This will animate the camera slowly across the front of the wall. Finally, Shift-click on the Position and Orientation property names to select all their keyframes, Control-click on the first keyframe, and choose Keyframe Assistant > Easy Ease to smooth out the camera animation: 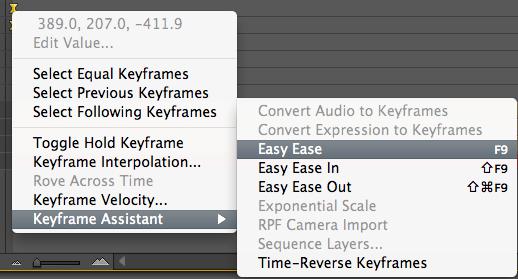 Preview this entire animation, and you should see something like this:

And there you have it - a reasonably realistic, if stylized, spray-paint stenciled logo animation. As I mentioned, you could replace the Wall and Cardboard layers with more realistic photographic layers, and there are many different possibilities for the light and camera.  As always, experiment, and have fun.

For more training check out these After Effects Tutorials.