In my After Effects Quick Tutorial, Animating a Path on a Map in After Effects, I used a realistic globe image for my map, but didn't explain how to do it. Here's how to create it in Adobe After Effects.

Now, any map image, realistic or not, will work for this tutorial, but I'm going to use an actual Earth photographic map for my version. A great royalty-free source for such maps is NASA's Visible Earth: Blue Marble series of cloudless composite Earth images: 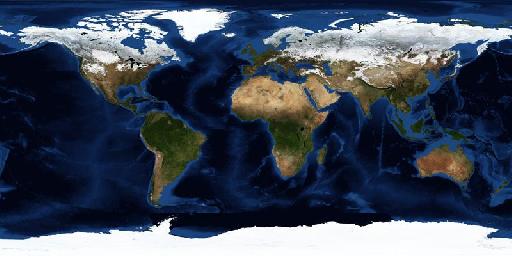 You can use any image you like, as long as it's a flat map, not an image that's already been mapped to a globe. The important thing is that this image be, if possible, in a 2:1 aspect ratio - that is, it should be twice as wide as it is tall, which the one above is. You can fix that in Photoshop if your image isn't at that ratio, but you'll save some time if it is. Fortunately, most realistic map images are at 2:1.

Step 2 - Set Up Your Comp and Import Your Image 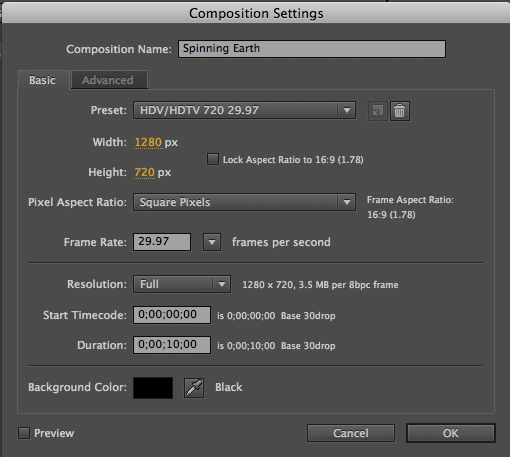 Next, import your map image and add it to the composition. It's probably too large for the comp, but that's OK.

Next, with the layer selected, choose Effect > Perspective > CC Sphere, and voila! An instant globe, with sunlight and shading: 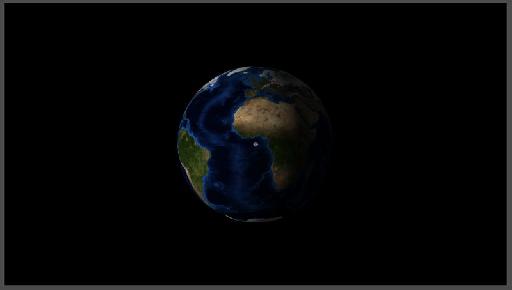 CC Sphere is designed to do just that - make globes, although you can use if for other things, of course. Just be aware that it works best when your images are at a 2:1 aspect ratio, which is why I've been emphasizing that.

Our final step is a simple one - animate the Earth spinning in space. First, in CC Sphere's Effects Controls, scale up the Radius property if necessary to get the globe to fill the comp:

Next, expose the Rotation properties in the Effect Controls and enable keyframing for Rotation Y at Frame 0 in your timeline: 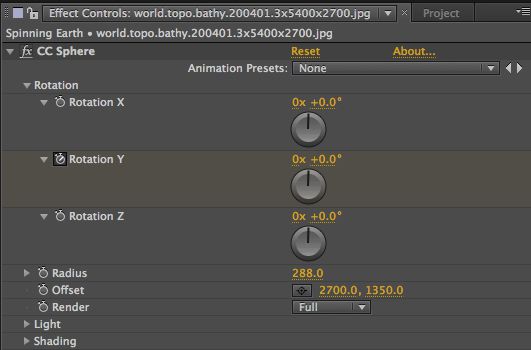 Then move ahead to the end of your timeline, to 9:29, and set a keyframe for one full Y rotation (use the Full Rotations property - the one with the X - not the Degrees property, so you have exactly one full rotation): 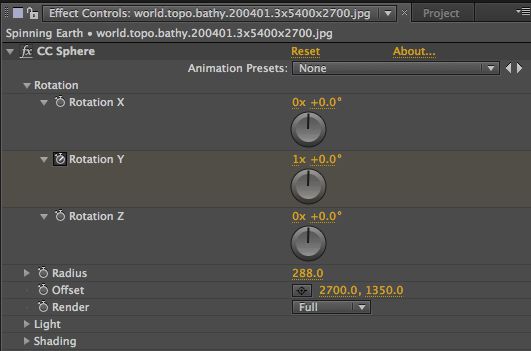 Render this out, and this is what you'll get, much like what you'd see from space (although without all the space junk):

And it's as simple as that. Try varying the Light and Shading properties in the CC Sphere Effect Controls for different lighting effects. And, as always, experiment and have fun with Adobe After Effects!