All Articles After Effects
Creating the Star Wars Hologram Effect in After Effects, Part 2
Richard Lainhart on Sun, July 24th 1 comments
Language
In the 2nd part of this After Effects Tutorial, we continue learning how to create the infamous hologram effect, as seen in Star Wars, on his friend and neighbour, Dream Theater's Jordan Rudess.

Read Part 1 of this series here. In part 2 we're going to continue from where we left off and create the actual Hologram Effect in Adobe After Effects.

Next, close the Layer Window and view the Comp window, where you should see your subject neatly composited against whatever color you've set your composition background to (I've set mine to gray temporarily): 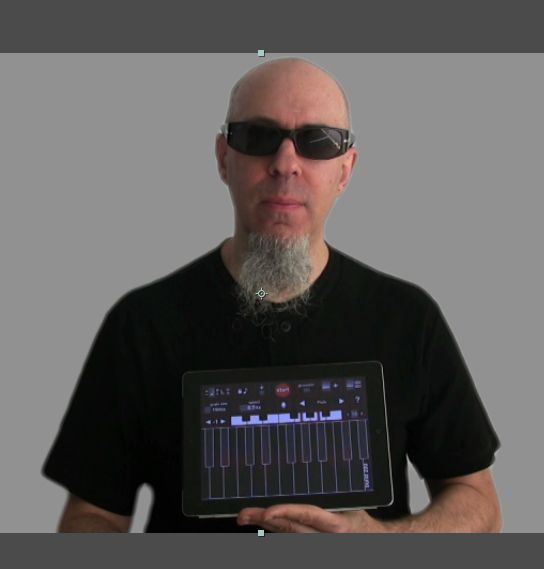 Don't worry about any little artefacts you may see on the edges here - those will get obscured when we create the effect.

Now we need to create the hologram look and the various transmission artifacts essential to the effect. We'll start by pre-composing the Roto Brush layer (Layer > Pre-compose), which has the effect of "pre-rendering" the mask so we can be sure it will be applied uniformly as we composite the layers. I've called my pre-comp "Jordan Head Roto Pre-Comp".

Next, duplicate our masked pre-comp twice layer - select it in the Timeline window, and type Command-D twice. Turn off the audio for the duplicated layers, so they don't add to the original audio and cause distortion:

We're going to distort these duplicated layers in various ways and composite them with the original footage to create scanlines and transmission noise.

Next, turn off the visibility for the top duplicated layer, select the middle layer, and apply CC Griddler to it (Effect > Distort > CC Griddler). You won't see anything at first with Griddler's default settings, but try dragging the Rotation value around in the Effect Controls to see what Griddler is designed to do, which is break a layer up into tiles and rotate them around: 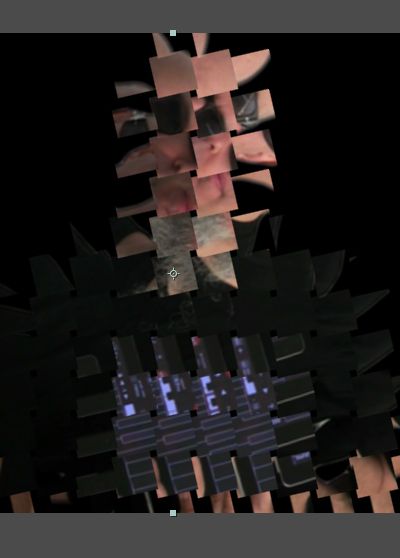 That's pretty cool, but we're aren't going to be using Griddler for that - instead, we'll set it to a series of very thin stationary tiles that will give us the look of scanlines. So, set Griddler's Horizontal Scale to 100, its Vertical Scale to -5, its Tile Size to 1.3., and its Rotation back to zero:

You should see something like this in the comp: which will give us nice scanlines in our final effect. You'll notice that the scanlines extend beyond the edge of the mask - Griddler is one of those effects that ignores alpha channels - but we'll fix that later.

Next, turn the top layer back on again, and apply Black & White (Effect > Color Correction > Black & White) to it. Leave Black & White at its default settings, except check the Tint checkbox, then click on the Tint color swatch and set the TInt color to a pale blue: 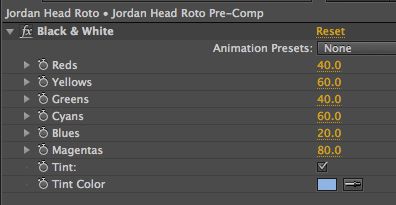 This will be the basis for the "hologram blue" color in our final comp. Your comp should look like this - for now, don't worry that the bottom layers are obscured: 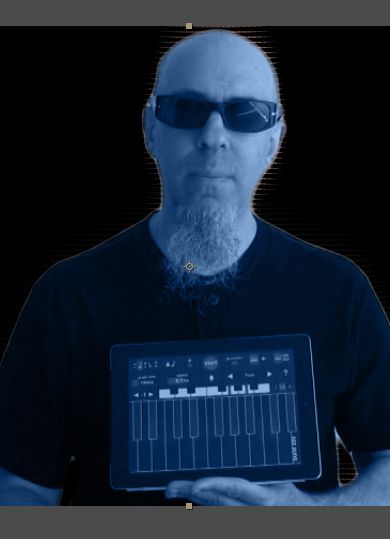 Finally, select the top layer in the Timeline, type "T" to solo the Opacity property, and set it to 60% or so. Your comp should now look like this: 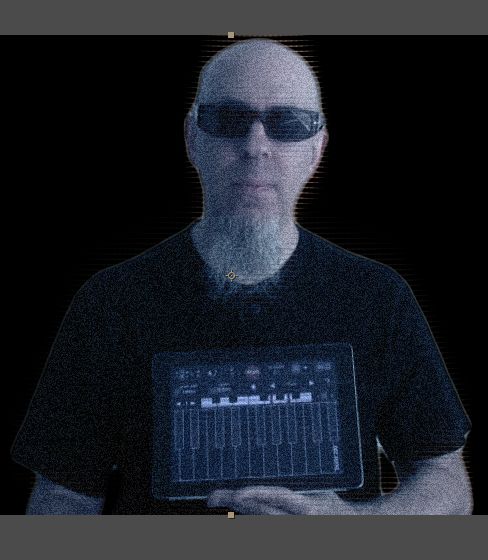 By reducing the Opacity for the Noise layer, we still allow the lower layers to show through, while adding a certain amount of noise to the mix. The noise will change automatically on every frame, so we don't have to worry about it appearing to be too static.

Next we have to mask the scanlines that are extending beyond the edge of the alpha channel. First, we need to bundle together all the effects on all the layers we've created so far. We could do this by either pre-composing the three layers we've created into one pre-comp, or by nesting the current comp (Jordan Head Roto) in a new comp. Those actions are essentially the same thing, so I'm going to nest the current comp.

This will use the alpha channel from the (invisible) top layer to mask out those pesky overhanging scanlines in the image: 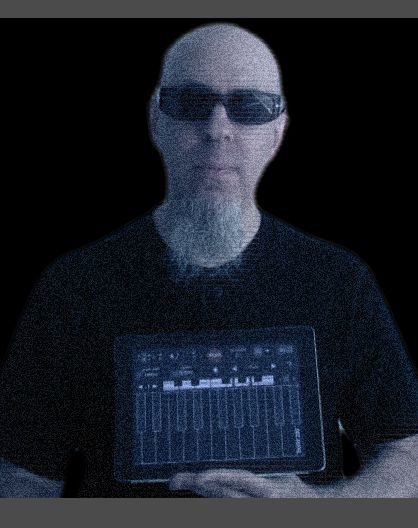 As you can see, we're most of the way there - just a couple more steps will complete our effect. The next thing we want to do is add a glow to reinforce the hologram effect. To do this, we need to nest the comp we just created, in effect "flattening" the Track

be sure to set the Glow Based On pop-up to Alpha Channel (so the Glow radiates in from the edges of the image) and to set the Glow Radius to a high value like 45 or so. Also experiment with reducing the Glow Intensity to .5 or so, so the glow doesn't wash out too much of the image: 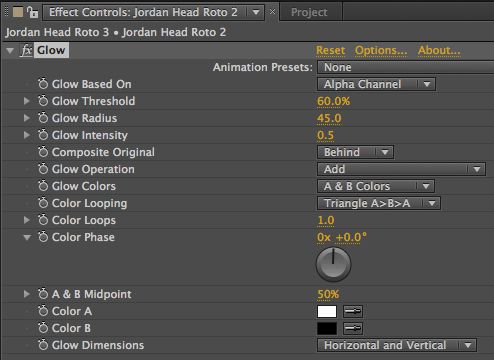 As you can see, we're getting very close to a cool hologram effect: 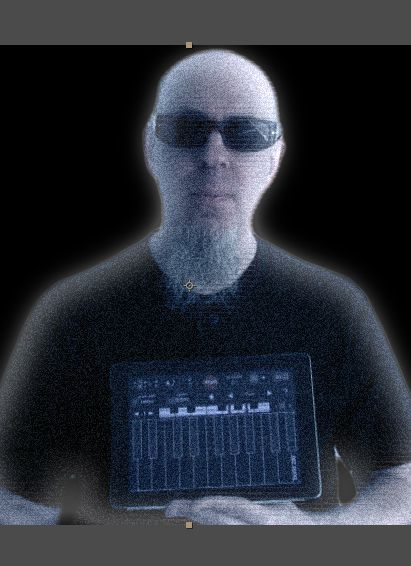 Now we'll a few transmission artifacts to our project. There are several ways to do this, including quite a few third-party plugins, but we're going to stay in After Effects. So, the next step is to apply Wave Warp (Effect >  Distort > Wave Warp) to the same layer we just applied Glow to. Wave Warp is usually used to create a wavy, dream-like effect to a layer, but it has a noisy side that will serve us well here. This will also, believe it or not, be the first time we'll be working with keyframes in this project.

So, in Wave Warp's settings, set Wave Type to Noise (which will give us jagged "waves"), Wave Height to zero (for now), Wave Width to 200, Direction to zero (both values), and Wave Speed to .5: 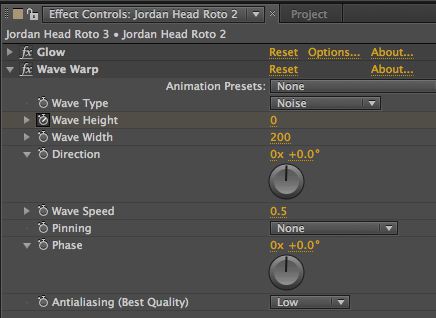 We don't see anything at this point, because the Wave Height is zero, but that's the property we're going to animate to create our glitches. So, with your CTI on the first frame, click the keyframe stopwatch for Wave Height. Now go down to the Timeline and type "U" (which solos all keyframed properties) to solo the animated Wave Height property. Control-click on that first keyframe and select 'Toggle Hold Keyframe' from the contextual menu to turn the linear keyframe into a Hold Keyframe:

This will not only set that value at the first frame to a Hold keyframe, but ensure that all new keyframes will default to Hold keyframes. Hold keyframes retain their value until the next keyframe, causing the values to "jump" rather than smoothly interpolating those values, so they're good for creating abrupt changes.

Now move ahead a couple of seconds, and change the Wave Height value to something between zero and 20 or so. You'll now see a horizontal glitch in the image, something like this: Next, copy those two keyframes (the first should be some number between zero and 20, the second zero), move ahead to another point in the timeline, and paste those keyframes in. Shift-drag the CTI to snap to the first of the two new keyframes, and change its value to something different. Continue pasting the two Hold keyframes into the Timeline at different random locations, and be sure to change the first value to something different, so the glitches aren't all the same.

Also be sure to paste a couple copies of those two keyframes close together, within a few frames, so you get repeated random glitches. When you're done, your Timeline should look something like this:

Preview this, and you should see more-or-less random glitches disrupting the hologram transmission.

And now we're at the last step - finishing out the effect. First, type "T" again with the current layer selected to show the Opacity property, and set it down to 50% or so. Then, add another layer to your final scene behind your hologram layer, just so the transparency is obvious - I've used some clouds and night sky, but you can use whatever is appropriate for your purposes, of course.

And here's how it all comes together:

You could, of course, fade in the effect so that it appears the transmission is starting and ending, but I'll leave that up to you.

And there you have it! I hope you've found this tutorial useful, and as always, I encourage you to experiment and have fun in Adobe After Effects. See you next time.