All Articles After Effects
Designing Lower Thirds in After Effects, Documentary Style
Richard Lainhart on Tue, August 23rd 0 comments
Language
Lower third titles have become synonymous with a multitude of genres. With so many different styles available, Richard Lainhart shows how to create a typical animated documentary-style title.

"Lower third" is the common broadcast video term for something you've seen hundreds of times: an animated graphical element that appears in the lower part of the video frame (usually in the lower third of the screen, hence the name), containing text that explains or identifies the action on screen. You see them regularly in news broadcasts or documentary programs, where they identify a speaker, and they typically consist of a larger upper element with the speaker's name, and a smaller lower element with more info about the speaker: "Charles Morris" in the top, and "Director of Sales" below it, for example. Searching for "lower third" on YouTube will reveal many examples and show you the huge variety of styles in use now.

In this Feature Tutorial, we're going to show you how to put together a basic news-style animated lower third in After Effects. Let's get started.

Step 1 - Set Up the After Effects Project

First, create a 640x480 10-second composition, with a gray background to make it easier to see our elements: 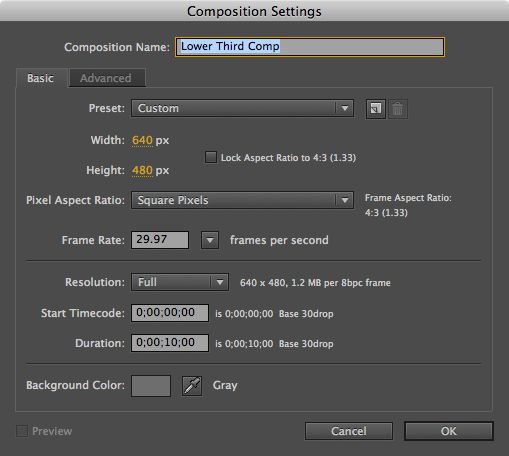 (We're going to work at this standard lower resolution here to make our screen shots a little more manageable, but you can easily scale up what I'm going to show you to any HD format.)

Be sure to turn on the Title/Action Safe guides for your comp; we need to keep our lower third text within the Safe Title area to ensure it will be seen: 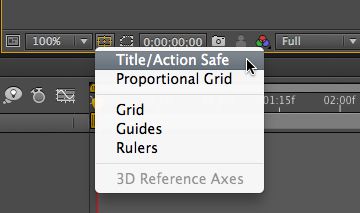 Next, create a new solid, 450 x 50 pixels, and make it a darkish red (you can use whatever color you like, of course, but it shouldn't be too light or bright): 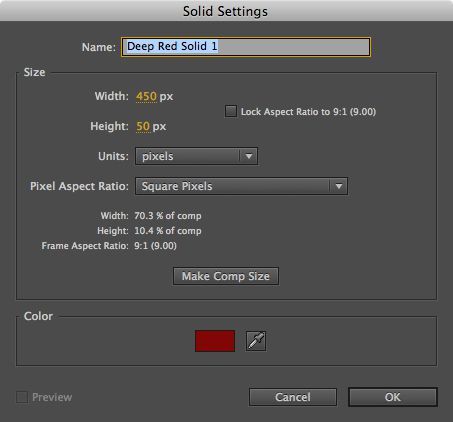 Position the solid in the lower third of the frame, well above the inner Title Safe guide, and align it to the left side of the frame: 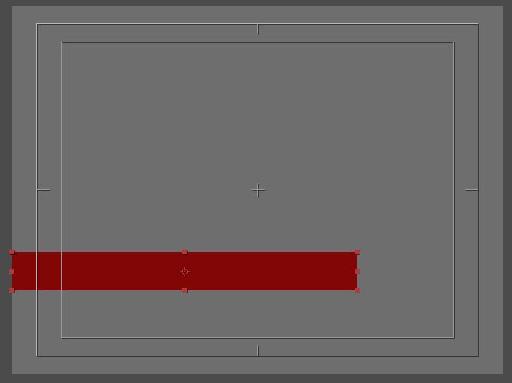 Next we're going to add a simple mask to the red bar to cut an angle into its leading edge ; this will give us more of a sense of motion when we animate the bar. So, with the solid selected, double-click the Rectangle Tool:

This will add a rectangular mask to the entire solid. Then select the Pen Tool (G), and click with it on the lower edge of the mask, perhaps 50 pixels in from the right edge of the mask, to add another point to the mask:

Choose the Selection Tool again (V), click on the lower right mask point, and hit Delete to remove that point - the solid will now have an angled front edge:

Finally, select the solid in the Layer panel, type T to solo Opacity, and set the solid's opacity to 60%. We want to make sure that we can see the underlying video through the lower third:

Next we're going to animate the solid onto the screen. Type P to solo the solid's Position   property, move your Current TIme Indicator (CTI) ahead to 20 frames into the composition (that is, 00:20), and click the stopwatch icon next to Position to set a Position keyframe. Drag your CTI back to 00:00, and drag to the left on the first Position number (its X value) to position the solid just off the screen, say to -230 or so.

Now select the two Position keyframes you just created, Control-click on one, and choose Keyframe Assistant > Easy Ease from the popup menu to apply easing to your two position keyframes, which will create a smoother animation. Preview the first second of your comp, and you should see something like this:

Our next step is to animate in our first text element, the name of our subject, for which we'll use an Animation Preset. So, select the Horizontal Type Tool (Command-T), and in the Character palette, choose a strong sans-serif font, make it white or light gray, and set its size to 40 pixels or so. Click with the Type Tool in the Comp window, on top of your solid, and type in the name of your  subject. Then choose the Selection Tool again and position the text directly on top of the solid, making sure to stay inside the Title Safe area:

Next, open or bring forward the Effects & Presets palette, and navigate to Animation Presets > Text > Animate In > Smooth Move In (you're free to try any of the other text animation presets here, of course.) Move your CTI to 00:20, where your solid animation ends, and drag the Smooth Move In preset onto your Text layer. Setting your CTI to 00:20 tells the animation preset to start at that point. Preview the first three seconds of your animation, and you should see something like this:

Now, by default, the Smooth Move In animation is a little too slow, so let's adjust those keyframes to speed in all up. With the Text layer selected, type U to solo all its animated keyframes. Select the second keyframes (the ones at 02:20) for Start, Position, Scale, Skew, and Opacity (all the properties under Range Selector 1) by dragging a selection marquee around them, then drag them all to the left to about the 01:15 point in the timeline. Preview that, and you should see a much faster text animation:

Step 6 - Add a Drop Shadow to the Elements

Next, just to add a little depth to the animation, we're going to add a drop shadow to both the solid and the text. So, with the solid selected, choose Effect > Perspective > Drop Shadow. Leave the settings at their defaults, except set Softness to 20, so the shadow isn't so hard. Then click the name Drop Shadow in the Effect Controls window to select the effect, type Command-C to copy the Drop Shadow effect with its settings, select your Text layer in the Layer panel, and Paste the Drop Shadow effect, with our modified settings, into the Text layer. Preview the first two seconds of the animation again, and you should see this:

All right, we're in the final innings of our Lower Third tutorial. The last thing we need to do is create the secondary elements of our animation and complete our lower third. To do that, rather than starting from scratch, we'll just duplicate and modify our existing elements. So, select both the text and solid layers and type Command-D to duplicate them. For now, turn off the visibility of the duplicated text layer.

Next, select the duplicated solid layer, and choose Layer > Solid Settings.... Change the settings for the solid to reduce its size, to say 400 pixels wide by 35 pixels high, and change its color to something else. I'm using a dark orange here, which is related to but different from its original dark red, but as always, your color choices are up to you: 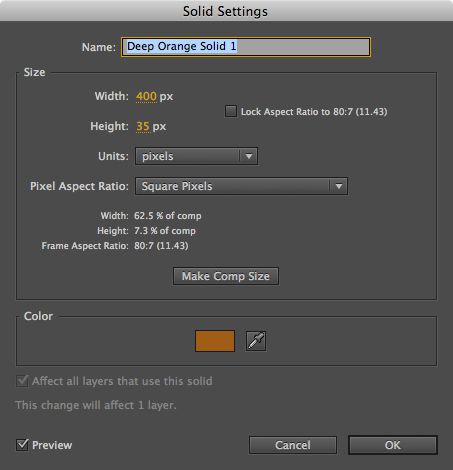 Now move your CTI ahead to 00:20, solo Position for the duplicated solid (which I'm going to call the orange layer from now on), and adjust both the X and Y values for the solid so that it's just below the red layer, and its angled front edge lines up with the angled edge of the red layer:

Note the value of the Y property at this point; mine is 389. Next move your CTI back to 00:00, and set the Y value at that keyframe to 389 (or whatever your value needs to be, so that the horizontal motion will be on a straight line again), and drag the X value so the orange layer is just outside the visible frame. If you preview, you should now see an animation of the orange layer moving in at the same rate and time as the red layer, but just below it:

So, select the orange layer and the Director of Sales text layer, move your CTI to 00:20, and drag the red layer bars in the Timeline so their beginnings start at 00:20 (be sure to drag on the bodies of the bars themselves, not the beginning of the bars, or you'll trim the layers instead of moving them): 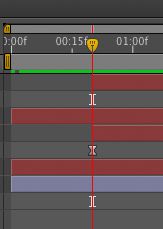 Now we've delayed the animations for the secondary elements, and your final results should look like this (I've added an image of some guy so you can see the transparency in the lower third elements):

And there you have it! As I mentioned, there is an infinite variety of lower thirds: sports, news, reality, weather, and more'"and this was a very basic one. Most lower thirds these days, in fact, contain animated elements within the background bars, and so take a little longer to set up. But I hope that even this simple tutorial has helped you get started in designing and animating your own motion graphics. And, as always, experiment, and have fun in After Effects!