All Articles After Effects
Exploding Words: How to Shatter a Title in After Effects
Richard Lainhart on Thu, May 26th 0 comments
Language
An effect you may have seen in film and television titles is the assembly of a logo or title from a random assortment of fragments, as if the title is being blown up in reverse. We can easily create..

An effect you may have seen in film and television titles is the assembly of a logo or title from a random assortment of fragments, as if the title is being blown up in reverse. We can easily create a basic version of this effect in After Effects using the Shatter plugin - this quick tutorial should provide you with enough background so you can start creating your own versions of the treatment. Let's get started.

Start by making a 720p, 10-second composition (Composition > New Composition...) in After Effects, and call it Shatter Text: 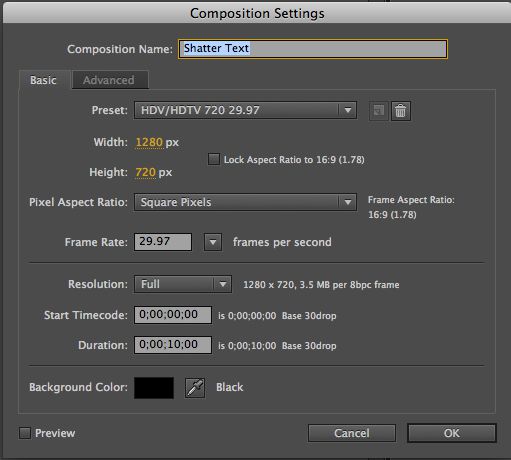 Select your Text tool, click in the Comp window and type in your title - mine is just a short "mPV". Make the text whatever color you like, make it a large font size that fills the screen well, and center it in the comp window:

Next, with the text layer selected, choose Effect > Simulation > Shatter to apply the Shatter effect to the layer. Shatter is a plugin that blows layers up into blocks or other shapes; because Shatter is a 3D environment, these blocks can have depth and shading. Shatter also contains a sophisticated physics engine that accurately models gravity and the multiple forces that can act on the exploded objects.

Set up the Shatter effect controls as shown here: 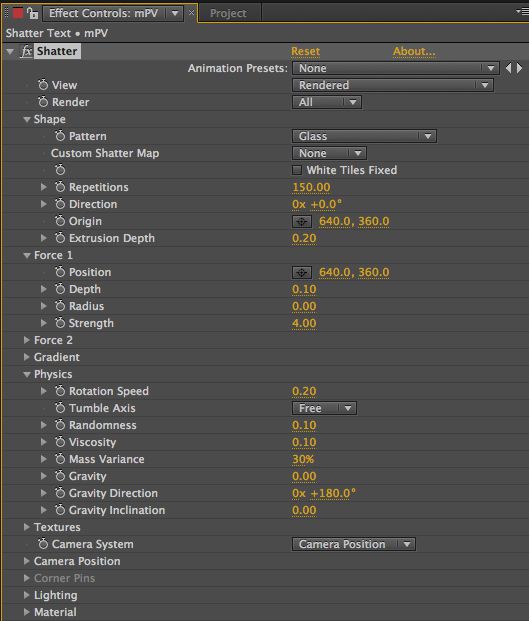 In particular, note that View is set to Rendered (so we can see the final results of our settings);

Now, if you preview this, you won't see any change, because the Force 1 Radius is set to zero, meaning that the initial explosive force that will blow up the letters has no size, and so doesn't affect the layer. There's a reason we've set it this way, as you'll see in a moment.

Next, move your Current Time Indicator to 1 second, and enable keyframing for Force 1 Radius. Move ahead to 1 second 15 frames, and set Force 1 Radius to 1. When you do, you should immediately see some action on the screen. Preview this comp, and you should see something like this:

Note that the initial explosion is delayed for 1 second, because we didn't start increasing the Force 1 Radius until the 1-second point.

Now that's all well and good, but we're supposed to be assembling our title, not blowing it up. But Shatter only works forward in time - you can only blow things up in Shatter, not un-blow them up - so we need one more step to assemble our title.

Create a new 720p 10-second comp, and call it Time-Reverse Comp. Drag the Shatter Text comp into the new comp, select the Shatter Text layer, and choose Layer > Time > Time-Reverse Layer (Command-Option-R). This will do just what it says - the timing of the layer it's applied to will be reversed, so everything in that layer happens backwards, in reverse order. In our case, this means that the Shatter explosion will be reversed, and our title will assemble itself out of random shards:

Note that the title is visible for a second at the end, which is why we didn't allow the explosion to start until one second into the comp. If we had let the title blow up immediately, which is Shatter's default state, the title wouldn't have been on screen long enough at the end of the reversed clip to allow us to see it.

And that's it! You can do a lot of cool things with Shatter in Adobe After Effects, and as always, I encourage you to experiment and have fun.