In this Feature Tutorial, we'll explore how to simulate the original Star Trek "Beam Me Up Scotty" effect in After Effects. While the effect varied somewhat from show to show in the original series, here's a classic version, from the official CBS "Start Trek: The Original Series" channel on YouTube:

The effect starts at the 2:00 point, and this is the one we'll recreate here (or at least get very close to). We'll start by shooting some live-action footage, capturing that footage into the computer, and bringing it into After Effects. We'll process that footage to create the empty scene, create a matte from the actor's outline, then make some synthetic teleporter energy sparkles, and finally composite the whole thing together for the finished shot. Let's get started.

First, you'll need to shoot and capture some video footage as the source for your effect. The footage should consist of a person standing in the desired scene, whether indoors or out - it could be your backyard, your homemade transporter set, or whatever you like - holding that position for a second or so, then walking out of the frame, with a couple of  seconds of the empty scene at the end. Here's my version, four seconds long, featuring my wife Caroline in our front yard:

One frame from the final couple of seconds of the empty set at the end of the live-action shot will be used for the beginning of our effects scene, and we'll create a one-frame mask from the held actor shot at the beginning of the clip to matte in our sparkles. So you want to make sure that the lighting and the positions of objects in the scene don't change (other than the actor), as we need the beginning and end frames to match as much as possible.

Step 2 - Set Up the After Effects Project

Next, import your footage into After Effects, then create a 1280x720 10-second composition: 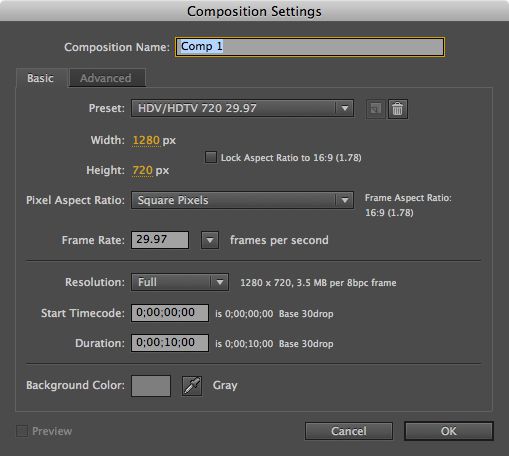 Next add your footage at the beginning of the comp. Use Command-Option-F to make your footage fit the 720p format if necessary. Duplicate this footage three times, so you have four copies of it in your timeline:

Turn off the visibility for the top three layers, leaving only the bottom-most visible. Drag your CTI to the frame you want to use as your empty set shot (called a clean plate), then with the layer selected, choose Layer > Time > Freeze Frame: 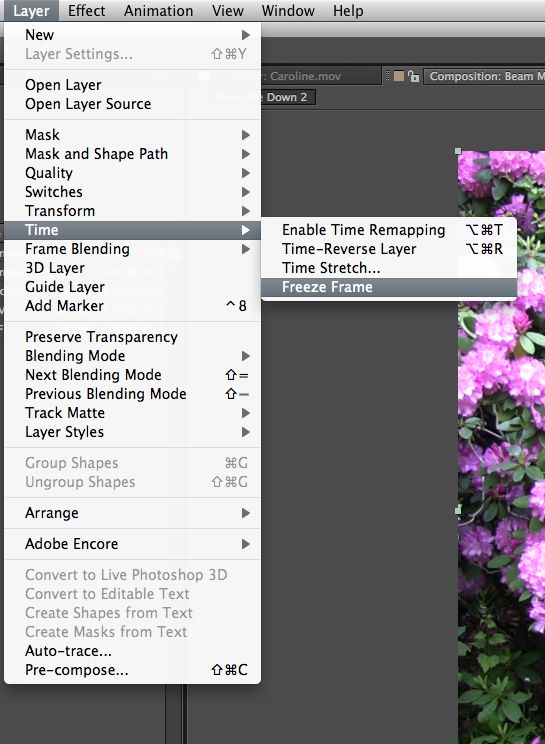 This will, via Time Remapping, lock that layer to the single frame we want to use. Now drag the end of the layer all the way out to the end of the timeline, to set its duration to the full 10 seconds of the comp - since it's a single frame now, we can make it any length we want.

Turn on the visibility for the layer above your clean plate layer, and locate a frame in your footage where the actor is frozen in place, just before he or she starts moving walking out of the set - in my case, it's the first frame. Apply a Freeze Frame to that layer too. Without moving the CTI, place a marker in each of the two layers above the one you just froze at that same point in time (Control-8) to mark that frame in the footage.

Now, with the top layer selected, choose the Pen tool from the toolbar and, drawing directly in the Comp window, draw a mask outline all the way around the frozen character:

(This isn't the place to go into the basics of masking - if you're unfamiliar with masking and drawing vector shapes in After Effects, refer to my Core After Effects 101 tutorial series.)

Next, roll down the Mask arrow for the layer you just masked, locate Mask Feather, and set it to 10 pixels or so, to help blend the mask into the background:

Make a new black Solid layer (Command-Y) the size of the comp and call it Sparkles: 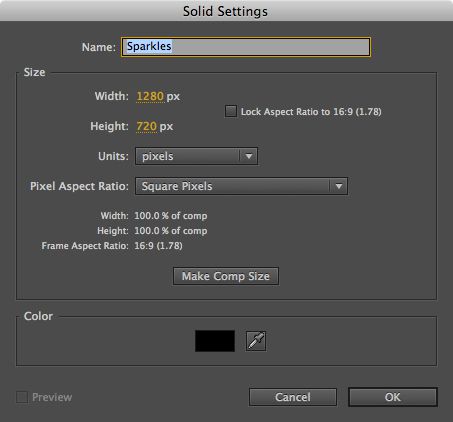 Drag it down between the masked layer and the clean plate: 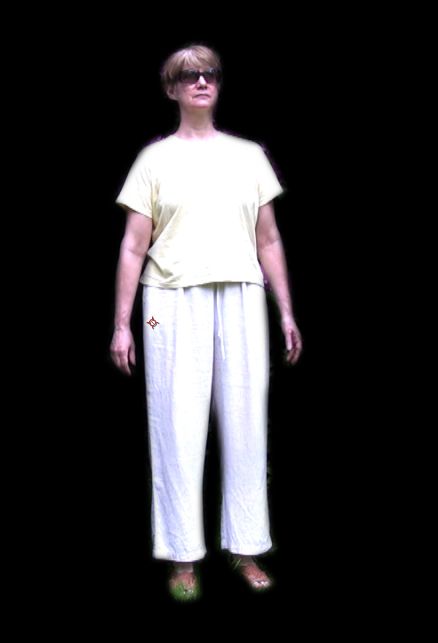 Now turn off the visibility for the masked layer - we no longer need to see it. 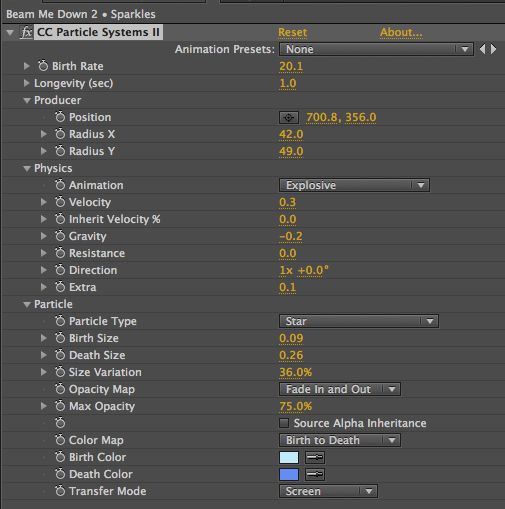 Finally, choose Effect > Stylize > Glow to apply the Glow plugin to the layer, and set the plugin as shown here: 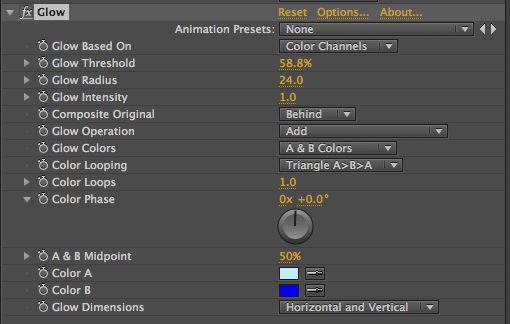 If you move down the timeline to the 2 second point, you should see something like this: 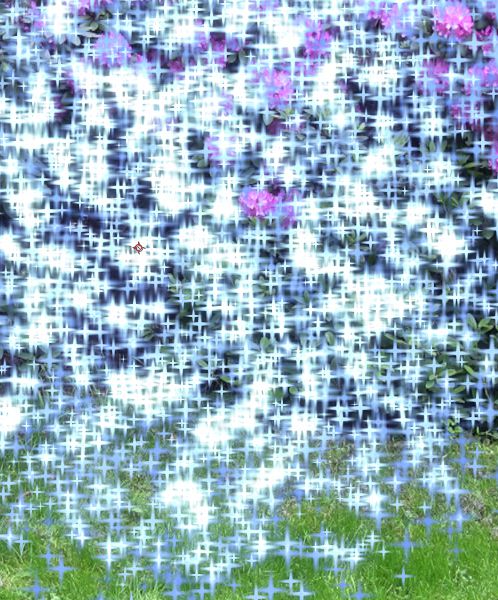 Next, display the TrkMat column in the Layer window, if it isn't already, click on the TrkMat popup, and choose Alpha Matte "(Name of Layer Above)" from the list to apply the mask we made earlier to the sparkle layer:

You should now see something like this in your Comp window: 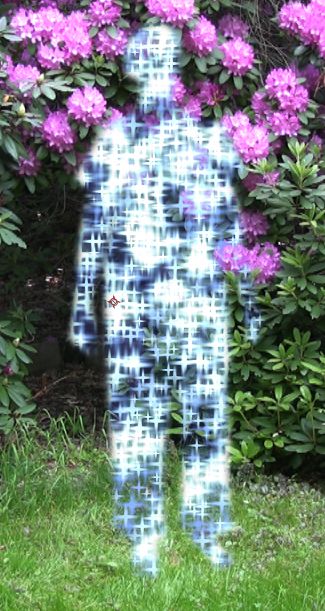 And if you preview your comp, you'll see something like this:

(The original effect fades in, but I like this effect of the particles building up to reveal the image. If you prefer, feel free to fade up the Sparkles layer over about a second with Opacity keyframes.)

OK, we have all our elements in place - it's time to assemble the shot. Or almost all - first, locate a sound file of the classic Star Trek transporter sound. I found one online:

Drag the soundfile into the comp and set it to start at 1 second in. Now drag both the Sparkle layer and the mask layer directly above it to also start at the one second point.

Now turn on the visibility for the movie layer directly above the mask layer (in my case "Caroline.mov on Layer 2"), move the CTI to the marker in the layer, and choose Layer > Time > Freeze Frame. Drag this layer to start at about 5 seconds or so. We've just matched the reference frame in the masked layer to the same frame in the original footage, and frozen it.

Now set an Opacity keyframe of 0% at the five-second point for the newly frozen layer, and another at 100% at 6 seconds, to fade in the freeze frame over the masked sparkle layer, shown here at 5.5 seconds:

Now turn on the visibility for the top layer, and drag it so that the frame marker in the layer lines up with 6 seconds, and with the 100% Opacity keyframe in the layer below it: 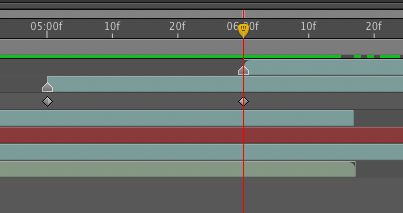 If you preview all this, you should see one second of background, then the Sparkle effect entering at one second with the audio, then a cross-fade to the matching still layer at 5 seconds, then a seamless move into the motion footage while the audio fades (if your audio doesn't put Level keyframes in the audio layer of 0dB at 6 seconds and -90db at 7 seconds to fade it out), then a last couple of seconds of background again:

And that's it! I hope you've enjoyed this, and I encourage you to experiment with any and all of the settings in the plugins, especially in Particle System II.

To get deeper into Particles in Adobe After Effects check out my After Effects CS5 203 - Secrets of Particle Playground Video Tutorial.