All Articles Mac OSX
3 OS X Yosemite Technologies that Will Drive Future Macs
Francesco Schiavon on Sat, October 18th 0 comments
Language
iOS 8 has been out for a few weeks, and finally its Mac counterpart, OS X 10.10 Yosemite is officially "shipping". Francesco Schiavon highlights the 3 features that will shape Macs in the future.

I've spent the last few months working with the Developer Preview of OS X learning about its new features, like its refreshed UI, more useful Notification Center, more agressive Spotlight, further integration with iCloud and almost a dependency to iOS. Instead of talking about these new features, which I do in the series of Yosemite course available at macprovideo.com, this time I want to reflect and get deeper into what I believe Yosemite tells us about the future of the Mac.

I should start by saying that OS X 10.10 Yosemite feels like a natural progression of the OS and not a revolution. It does feel new and you may feel a bit out of place the first few days you use it, but it does feel like a Mac. After all you won't be totally lost as the poor Windows users felt when they installed Windows 8, or iOS users when they upgraded to iOS 7.

Now, let me extrapolate from the Yosemite features and give you my thoughts on how these features may become the foundation of future OS X versions.

iCloud: the center of the world

To take advantage of the most noticeable features in 10.10, you will need an Apple ID and access to iCloud. It really hits you as you finish the upgrade process or as you try to log in to your Yosemite Mac for the first time. For the most advanced features to work, like Handoff, SMS, iCloud Drive, if you don't have an Apple ID, you simply don't get the features.

Once you start using iCloud to sync... err... everything between your different Macs and iOS devices, you'll feel relieved how simple getting "your everything" is becoming. Forget about spending 2 days moving your software and files from one Mac to the new one. Sign in with your Apple ID and heck, even your music library syncs up.

Clearly, the Apple ID and all the iCloud services are at the core of the current and upcoming Mac offerings. The idea is to give us all this convenience. Most likely, more of the future services that Apple will add to OS X and iOS will depend on your Apple ID and iCloud.

I'll give you a tip here. Make sure you create and use strong passwords for that Apple ID. If for any reason you have more than one Apple ID, make sure you are super organized because with sooooo many difference services, all accessible with your Apple IDs, it can get confusing what account you decided to use for what service or purchase.

When Apple updated their iWork suite of applications (Keynote, Numbers, and Pages) in 2013, there was a revolt from customers that had been using the prior versions because some (many) great features of each of the applications were removed. This was done so the Mac versions of the software would have the same capabilities of their iOS counterparts. Even though the way you interact with, say Numbers, on iOS and on the Mac is super different, both versions have almost the exact same feature set.

This same trend is noticeable in Yosemite and iOS 8. The Messages applications on both iOS and OS X have almost identical feature sets, but their UIs (User Interfaces) are optimized for each OS. Very similar story with Safari, Mail, Calendar, Contacts, Reminders, Notes, and I can bet you it will be the same for the upcoming Photos application for OS X.

This makes consistent software across platforms, but optimized for the way we use each kind of device. And it also relates to my first point. If the software has almost identical feature sets on the different OSs, then your iCloud stored data is accessible just the same way regardless of device, and location.

BlueTooth LE (Low Energy) is a major component for "Continuity" and "Hand off" between your Mac and your iOS device. These low power radios tell the other devices around that they're near by. When you walk in to your office, your Mac on your desk knows it's you because your iPhone literally advertises its presence. How does your Mac know it's you and not your spose? Because your Apple ID. Since you're logged in with your Apple ID on your iPhone, and your iCloud account on the Mac uses the same Apple ID, then each device can validate it's you when they're close to each other. That's why you don't need to login when using Instant Hotspot to use your iPhone as a connection to the internet; you're already logged in with your Apple ID.

BlueTooth LE is also used in all sorts of 3rd-party gadgets, from heart rate monitors to the super hyped Apple Watch, to micro location services at retail stores. Expect more devices both from Apple and from 3rd parties to use BlueTooth LE to communicate amongst each other and also to determine your precise location, for example, while you're at home, at work, or shopping.

It's no secret that the future is more interconnected. Our Macs and our iOS devices will be tools to access and consume our content. Each will play to its own strengths, and although they will still be different, they'll be able to do almost exactly the same things.

At the end, the storage devices in our hardware (I've stopped using the term "hard drive", since they're dying faster than the 30 pin connector) will become mere staging storage (caches) as our lives are uploaded and downloaded from the ever growing data centers; AKA "the cloud".

We'll only need to remember one password; that of your Apple ID in case Touch ID is offline. So, make sure you make that password 1) strong, super strong, and that 2) you can remember it always, even after being hit by a bus!

Learn more about Yosemite in these tutorial videos: 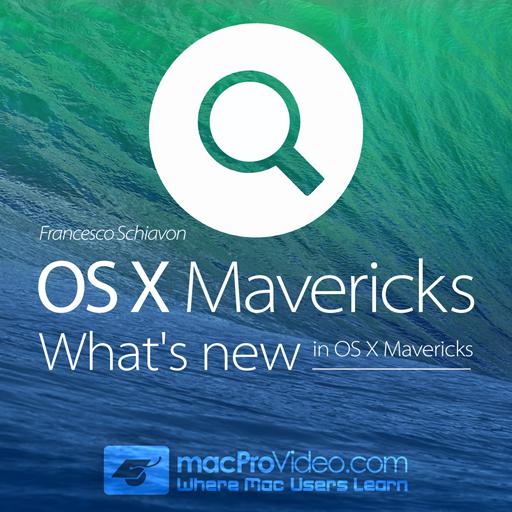 Dream It. Do It.
Do you want to learn What's new in OS X Mavericks?
Yes, I want to learn!
No Thanks, I just want to read the article.
Feedback
How are we doing?
We'd love your thoughts, feedback and questions regarding our new site. All feedback is appreciated!
We do not respond to this form! If you need support, please visit our support page.
Thank you for your input!
Your message has been successfully sent
Course Advisor
Don't Know Where To Start?
Ask A Course Advisor