In this tutorial I've chosen Transformers 3 to demonstrate the "film look". It has some really cool trailers at least that we can look at:

The truth is, however, that the Color Grade depicted in Transformers 3 is very common in Hollywood dramas, and also increasingly popular in TV series. I could have chosen any number of examples to emulate; Iron Man 2, Johnny English (not the Tibet part), Harry Potter (pick one)...the list goes on. And while each film is a little different in its look there is a fundamental grading method used throughout them all. The shadows are a little crushed and pushed towards Teal in the color spectrum while the mids are pushed towards Orange.

The reason for this trend has to do with Color Psychology and its effect on the audience. Take a look at Final Cut Pro X's Vectorscope: 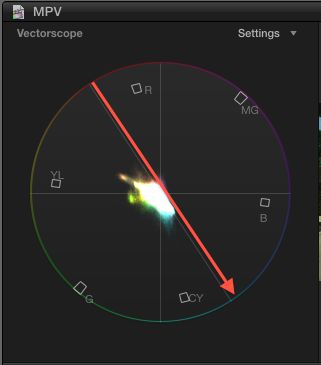 The Vectorscope illustrates the Color Wheel,  with Red close to the 12 o'clock position. The line marked at approximately 11 o'clock indicates the ideal position on the Vectorscope for skin tones. Directly opposite this line, at the 5 o'clock position sits Green/Blue. Using the two together creates a color contrast based on skin tone. 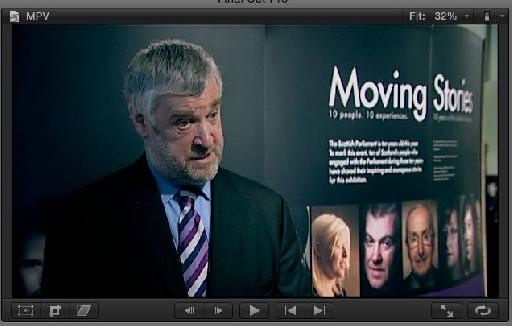 As well as creating a pleasant contrast around skin tones, the use of a cool green has a calming effect, or so the color psychology goes. It enhances the red tones of faces giving them emphasis over backgrounds, etc.

So, how can you use the Color Board in FCPX to emulate this kind of grade on your footage? Let's get started.

Step 1 - Prepare a Clip to Grade

Select a clip from the Project Timeline and on the toolbar click on the 'Enhancements' icon and choose 'Show Color Board', or press Command-6. 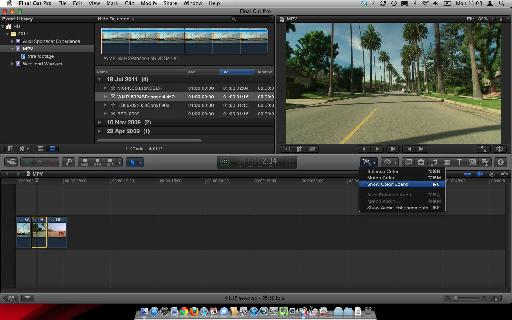 The Color Board will open in the Inspector, displaying FCP X's color modifier for the selected clip. Had the color modifier still been designed as a color wheel then that could have helped us do a simple color grade. However, it would have lacked any of the accurate information we need to avoid any picture clipping, which would result in color distortion.

In the top left corner of the Viewer, click on the Display drop-down and choose 'Show Video Scopes'. 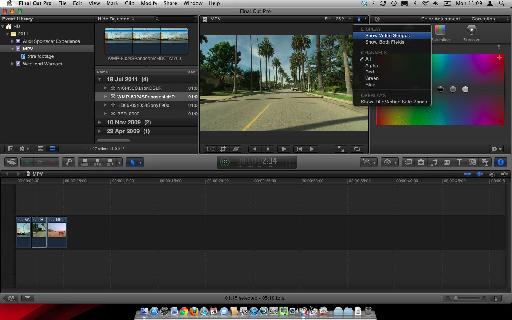 The scope that appears inside the Viewer will be the Vectorscope. This is the correct scope to use for the first part of our color grade.

The Color Modifier has four options for modifying color:

Using the Shadows handle first, I push the colors of the images towards that Teal hue we discussed already. Here I've set it to a position of 201 degrees and increased it in value to +43%. Tip: Always modify the shadows first as they can have an influence on Midtones and Highlights as well. Modifying the Shadows last could have an effect on work already done on Midtones and Highlights.

Notice the change in the vectorscope: as I increase the amount of Teal into the image, its signal has stretched down towards the 5 o'clock position considerably.

Midtones conveniently hold most of the tonal values associated with skin'"most of the time anyway. As a result we are not always required to create secondary grades using color masks to modify skin tomes unless it proves necessary.

This time I push the Midtones handle over to a position of 35 degrees and up to a level of +48%. Again the vectorscope indicates that the satiation lines have spread up the skin tone line at 11 o'clock.

If I have a look at my contrast, however, the levels are not quite right...would you agree?

Step 5 - Setting up for Levels

The Vectorscope has done its job, it's now time to swap it for the Waveform Monitor.

From the Scopes' Settings drop-down menu, choose Waveform. This will open the waveform measuring luminance. Assuming that the footage you are using has been color-corrected properly before you began grading (as it always should be), this waveform is not the required one. Instead, use the same settings menu to change it to 'RGB Parade'.

The RGB Parade displays the luminance levels of each color channel individually, making it easy to see where problem areas lie during grading. For this image it's easy to see from the Waveform that the Red and Blue tones are a little overexposed and that the Blue and Green tones contain no Black information also, resulting in a low contrast, slightly bleached image.

Over in the Color Board, choose Exposure. Here are 4 identical handles for Global, Shadows, Midtones and Highlight values.

To begin with, remember to start with shadows. In order to get the Blue parade to kiss the 0 (black) point on the Waveform Monitor I have pulled the Shadows Handle down to -10%

As you can see it increases just how dark the shadows in the image get, though they still have a Teal hue.

There is no real restriction on how far you should lower (crush) black levels other than how it looks. Whites on the other hand are far more restricted. 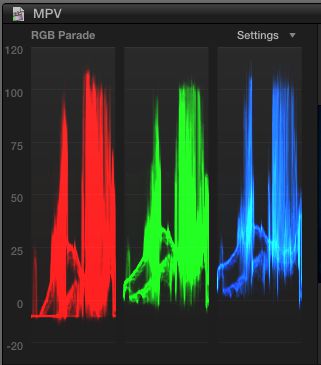 As you can see from this Waveform the white levels on all 3 colors, but in particular the Red and the Blue, are above the 100 line. This would not conform to the Broadcast standard and would be rejected. Depending on what media you're using and how the video is to be displayed, white can be pushed up to 120 (referred to as "super white"). Here we will stick to the conventional 100.

TIP: think about what might happen if there was a sudden change in the exposure such as a camera flash or a reflection making everything brighter. Always bring your levels down to maybe closer to 90 to allow for this sudden increase.

We have nearly achieved our look; there is just one more area to modify.

Transformers 3 has a slightly bleached out look compared with, say, Iron Man 2 which is more heavily saturated. To achieve this part of the look we need to open Saturation in the Color Board:

Just like Color and Exposure we are presented with the same 4 handles to control saturation either Globally, or in the Shadows, Midtones or Highlights. I've also switched the scopes back to the Vectorscope for this part.

To create an even cooler tone of teal for the shadows I've dropped the Shadow handle to -45%. This gives the image a more steel grey feel, enhancing the heavy metal, sinister feel of the film.

To add a little more "kick" to the face I have increased the Midtone handle to +51%. As I've already pointed out, skin tones conveniently sit in the Midtone range most of the time.

The movie Saving Private Ryan used a look known an Bleach Bypass, which involved adding more silver to the Film Stock. Luckily for us, all that's needed to complete this look is to desaturate the highlights by pulling the Highlight handle down to as far as -80%.

This is the final graded image compared to the original: Once you have your look you don't want to have to complete every step again for the next clip, and then the next and so on. Instead, create a color preset in FCP X and apply it to other clips with one click!

Click on the Presets drop-down menu (gear icon) at the bottom of the Color Board and choose Save Preset... 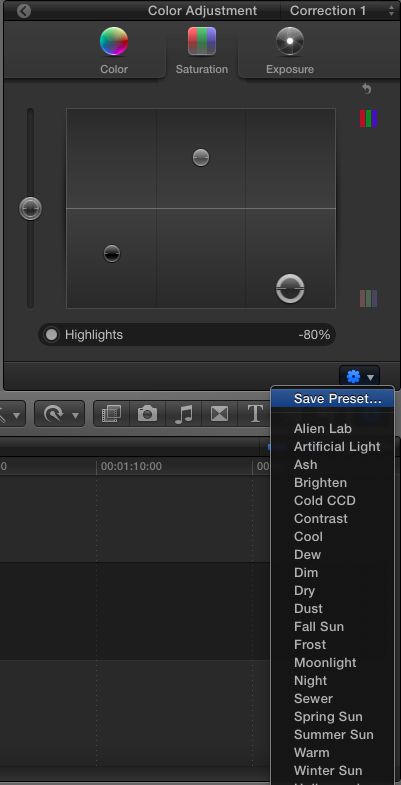 Name it 'Transformers 3' and press OK. Step 12 - Apply the preset to other Clips

Click on another clip in the timeline, and in the Color Board open the Presets drop-down menu: Choose 'Transformers 3' to apply the preset.

Each shot should be graded on its own merit so be prepared to have to modify the settings a little after you apply the preset. However, most of the work is done for you now.

One thing to remember when you are grading color: you are grading the look of the entire film not just the scene, so be flexible in your approach, don't try and make everything match exactly, as you may never achieve that. Just so long as the overall look works.