FCP X provides some incredibly powerful and easy to use audio sync options. In the scenarios that I am going to show you in this article we will focus on audio created using Dual System Recording. This is where the audio track is recorded onto a separate device during filming in order to be of a higher quality, while at the same time being recorded by the camera along with the footage at a lower quality to be utilized as a guide track in post.

These techniques can also be used to re-attach edited audio that might have been exported and cleaned up in Pro Tools or similar and then re-imported and requires to be re-attached to the video.

To begin with let's have a look at manually synchronizing audio. For this you will need the original clip and a separate audio version of the same clip (presumably better quality).

Append edit the original footage with its original soundtrack to the timeline by selecting it in the Event Browser and pressing E. Press Cursor Up to return the playhead to the head of the clip.

Now select the audio clip of the modified sound in the Event Browser and connect it to the start of the first clip in the storyline by pressing Q. 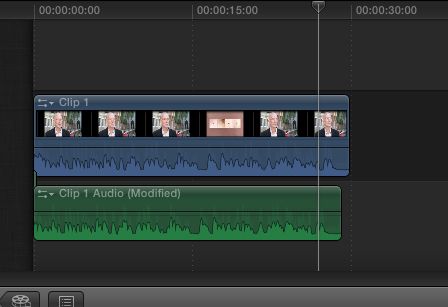 Click on the Timeline Options button at the foot of the timeline and select Waveform Only. This will make it easier to see where both timelines match. 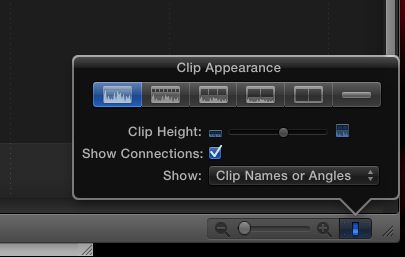 It will also help to increase the height of the clips in the same menu, and also zoom it using Command-+ until the clips fill the timeline.

Drag the green audio clip back and forth using the Select tool until the waveforms match quite closely. 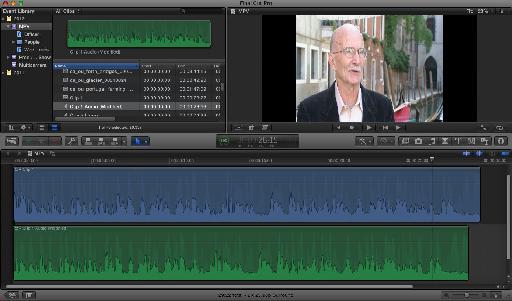 Zoom in some more in the clips to see even more detail, if the waveforms position requires more refinement select the clip and press < and > to nudge the audio clip one frame back or forth.

Tip: Holding down Option as you press < > will move the audio clip 1/80th of a second providing a very finite refine option, for the perfectionist in you.

As well as looking at the waveform to see it sync it's a good idea to actively listen to the clip as well. Playing both tracks makes that very hard. To play back just the sound from the audio-only clip select the video clip and press Solo or press Option-S. Play the selection over and over until the clips are in sync by pressing /. 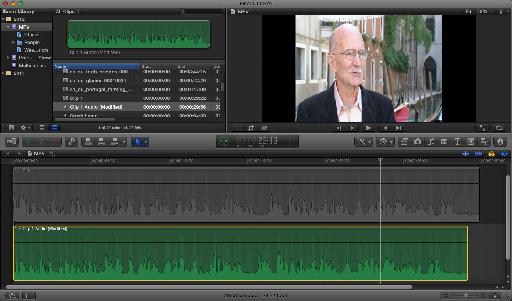 That makes it easier to see and hear when the footage is synchronized again. Once you are done tidying things up select both clips and make them into a compound clip by pressing Option-G.

TIP: You can nudge the footage during playback! Try it, it's very cool!

Now let's allow FCP X to do the work for us by auto synchronizing the same two clips again.

In the Event Browser select the original video clip, then press Command and also select the Audio only version of the clip. 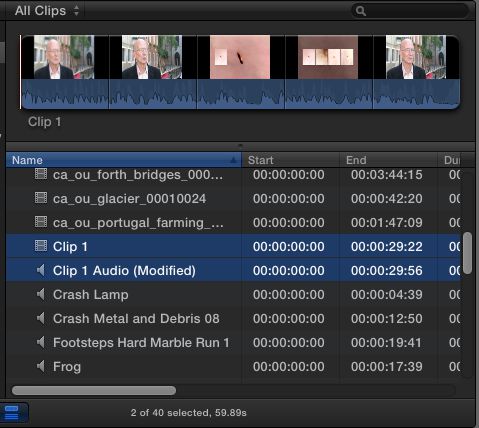 A new clip is created from the original 2.

When you play the clip the sound your can hear is from the video and audio clip. To switch the clip's audio source to the better sounding audio-only clip open the Inspector or press Command-5. 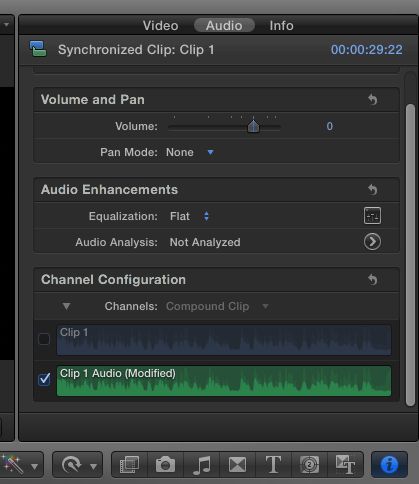 Press the Audio tab in the inspector and in the options titled Channel Configuration check the green audio track and uncheck the Blue one. Play the clip back and see how that works.

Obviously the auto option is a very attractive one as it's so easy to use but the purist in me thinks it's important to understand both.

David Smith
David Smith is Scotland's most qualified Apple and Adobe certified trainer. Having completed his education at Edinburgh College of Art's BAFTA winning Film School, David moved straight into TV production, first as a Vision Mixer then quickly becoming, at the age of just 24, a director of live TV studio productions. In 2001 he moved into Higher Education where he became a lecturer in TV Production, specializing in post-production and live studio production. During this time, and working with the support of the BBC, Channel 4 and independent production companies, David was instrumental in the design, development and implementation of industry-approved vocational courses across Scotland's Colleges. In 2006, after working closely with Apple Computers to create a unique multimedia studio for education at the Music and Media Centre in Perth, David became Scotland's first Apple-Certified Trainer for Pro Apps. This led on to David forming the first Apple Authorized Training Centre for Education, north of Manchester. In 2008 David made the move to full time training and joined the ranks at Academy Class, Ltd. where he continues to train industry professionals as a certified trainer across the Adobe Creative Suite and Apple Pro Apps range.
Related Videos
Comments (5)