All Articles iPad
Collaborating on Video Projects on iPad (using Dropbox and iFiles)
Mike Watkinson on Fri, October 5th 0 comments
Language
With the arrival of iMovie and other video editing apps, making movies on the move just got much more fun. What if you don't want to work in isolation? Here's how to collaborate using Dropbox and more

iMovie is a great app that allows quick and easy movie editing using movie footage and stills from the camera roll. With the iPad and its apps designed primarily for personal use, working with others on a video project can prove a challenge, so here are a few suggestions that will let you create a workflow that supports collaborative moviemaking.

Gathering the Footage in One Place

Imagine a scenario where, as a group, you have planned the shots you need and then you split up, each group member with an iOS device for capturing their contribution to the project. Here is one solution for collecting all the resources into one place: Uploading movie footage to a folder in Dropbox.

The Limitations of Dropbox

Dropbox will give you 2 GB of storage on a free account. If this isn't enough, you can pay money to upgrade to Dropbox Pro, or increase your allowance by inviting collaborators to join Dropbox. It makes a lot of sense then to think about this when doing the initial install/account setup.

The Challenge - Video is different

So far so good, but the challenge comes in getting the resources from Dropbox into iMovie. Still photos are straightforward as they can be shared from Dropbox straight to the Camera Roll and hence into iMovie, but movie footage requires a further step. The issue is that the share button in Dropbox does not allow you to open movie files in iMovie, or download them to the Camera Roll (as they are in the cloud), even if you '˜favorite' the movie files by tapping the star button. This downloads the file from the Dropbox cloud onto the device (a feature that allows you to watch videos when offline). 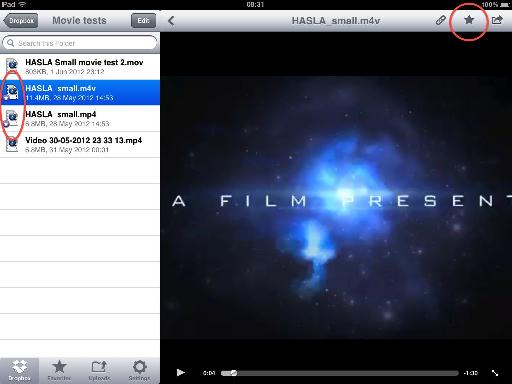 Favorite movie files in Dropbox to download them to local storage;
note that .m4v, .mp4 and .mov files are supported. 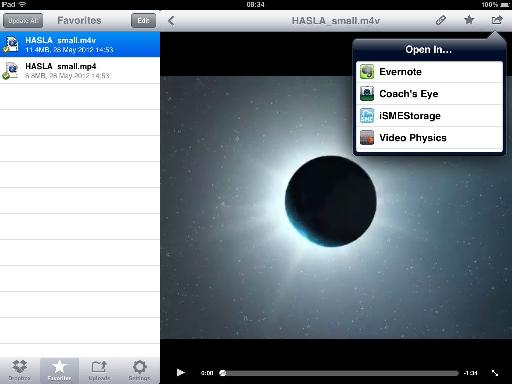 '˜Open In...' does not show iMovie as an option - well it does for mp4 but that option only supports audio files with the mp4 extension!

Install the iFiles app. Although the app is Â£2.49 ($3.99) it offers a whole range of collaborative options such as peer-to-peer sharing via Bluetooth and the ability to turn your iPad into a WebDAV server. In this case, it will act as a go-between for Dropbox and the Camera Roll

In Dropbox, tap the Share button, then choose '˜Open in..' and choose iFiles. In iFiles, in the local folder to which you saved the video, tap Edit, select the files you want and choose '˜Add to Camera Roll' 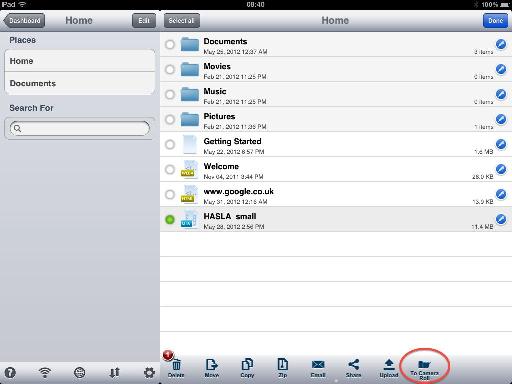 Add your movie file to the Camera Roll from iFiles.

The resources will now be available to iMovie.

As an alternative to step 2, you could add your Dropbox account to iFiles and access the movie footage directly in iFiles. You will again need to download the movie footage to a local folder (if it's in Dropbox it's in the cloud and can't be added to the Camera Roll) by tapping the Edit button, selecting the files you want, tapping download and choosing a local location within iFiles. Then carry on from Step 3 above. Downloading from the Dropbox cloud in iFiles, prior to saving to the Camera Roll. Accessing other cloud storage from iFiles.

In a scenario where you have more than one team member editing in iMovie, these can easily be brought together into one place as follows: 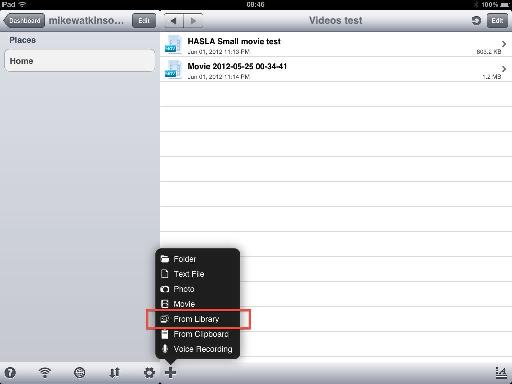 Uploading to cloud storage of your choice from within iFiles.