The various formats for Instrument & Effect Settings in Logic X.

When there are active Sends in a Channel Strip, a Patch not only saves the Send levels & destinations visible on that Channel Strip, but also the busses and destination Auxes with the plug-in settings in them! This ensures that when you load the Patch, everything necessary to reproduce the sound will be present'"all the settings within the strip, plus all additional Aux strips and effects required for the Sends to be fully functional. Logic X is smart enough to notice when a saved bus or Aux channel number that's about to be loaded is already in use in the destination Project, and it seamlessly updates the bus and Aux channel number from the Patch to the next highest available numbers, so as to not disturb any routings already in the song. Everything is recreated, except the Channel Fader and Pan settings, which are assumed to be unique to each Project.

This, obviously, is a terrific convenience, but there are times when you might not want to load in all the components of a saved Patch'"situations where you don't need the Send effects, or the MIDI settings, for example, or you already have plug-in effects set up, and you just want to change the Instrument itself to an alternate sound. Naturally, you could choose to load from one of the other settings types'"Channel Strips only (no Sends), or plug-in/instrument settings only (from the individual slots). But you might have a Patch whose specific settings aren't saved in any other format, so this is not always an option. And you don't want to always have to save the individual elements of a Patch you've made in all those other separate formats as well, just to insure flexibility at some possible future date.

Fortunately, Logic X has a selective Patch Merging feature that saves the day. It's easy to miss, hiding at the bottom of the Library Pane, as part of  the little gearshift submenu. 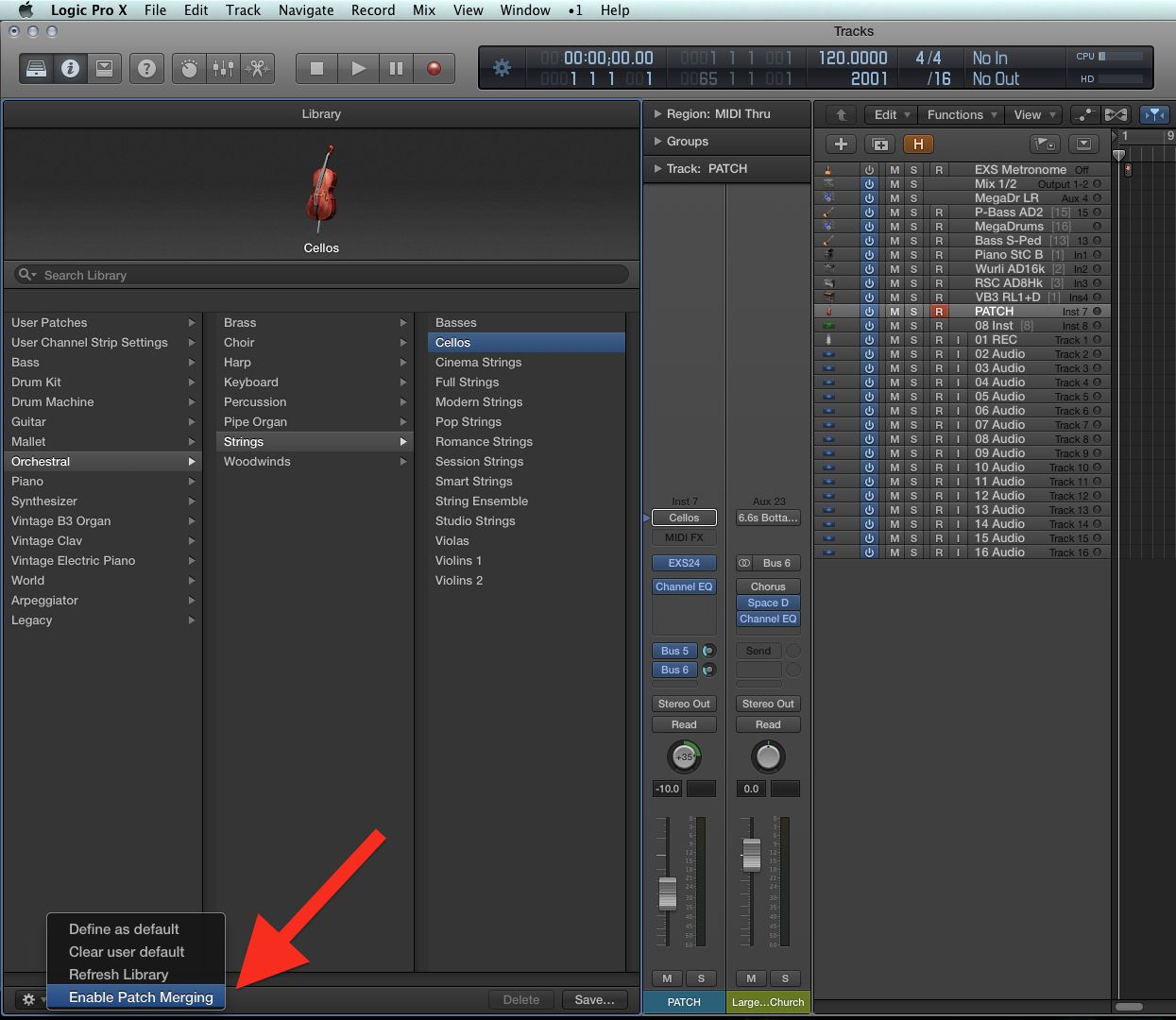 Enabling Patch Merging in the Library Pane in Logic X.

When you enable Patch Merging, you're presented with the option to selectively enable the loading of all the separate components of a Patch: Instrument settings, MIDI Effect settings, Audio Effects (it's an all-or-nothing option for all regular audio plug-in settings in the Channel Strip), and Sends.

The Patch-Merging Options in Logic X.

They're all enabled by default, meaning that all these components will be loaded when you click on a Patch, blowing out whatever is currently in the Channel Strip. Assuming there are already Instruments, plug-ins, and Sends in the destination Channel Strip, disabling one or more of these options will preserve whatever's currently loaded into the corresponding section, thereby Merging the new elements with the old. So, for example, if I disabled 'Audio Effects' and loaded a Patch, then any plug-in effects I had set up already would remain, but the current Instrument and Sends would be replaced by the settings in the Patch.

This feature allows you to work almost exclusively with the Patch format, if you choose, without having to duplicate all your custom settings in all the different formats to insure maximum flexibility. Once you're aware of it, it makes what can be a somewhat complex aspect of working in Logic much simpler and more efficient!