All Articles Motion
Exploding Bucket Dan's Moustache in Motion
Ben Balser on Mon, December 17th 0 comments
Language
If you've not yet played Bucket Dan (free on iOS) and you're a facial hair fan, go download it now! In this tutorial Ben Balser shows how we exploded the moustache using Apple's Motion.

Making things turn to particles with Motion 4 or 5 is a good trick to know. In this article I'm using the Bucket Dan trailer as my example. At one point in the game's teaser video, Dan's moustache has to explode, creating a transition into the next segment of the teaser. This same technique could be applied to whole people, as they move, photos, graphics, shapes, anything you need. Notice I'm using a Replicator for an explosion, not a Particle Emitter. You'll see why as we progress.

I am in Motion 5 (this works in 4, too) and have a graphic of our hero's mustache. I will keep the background black, and export this for compositing over the full video in FCP X. I have one main group, and two sub groups named Particles and Mustache. The mustache graphic is placed in the Mustache sub-group. As with most explosions, this is a short clip. Only 2 seconds and 3 frames in duration. 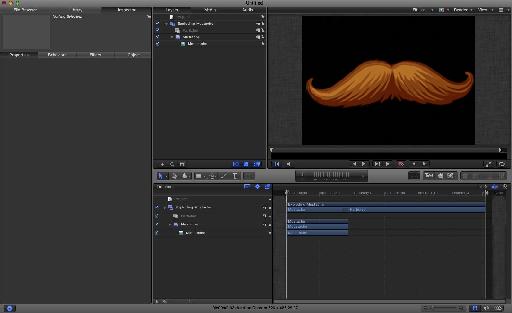 I'll set the duration of my mustache graphic to 18 frames, at which point it will vanish, replaced by the exploding mustache effect. The overlap will not be visible if done correctly. Command-2 for the Library, to Behaviors, to Basic Motion, applying the Fade In/Fade Out to the mustache graphic, set In to 0, Out to 3.5. That is it for our prelude to the explosion. 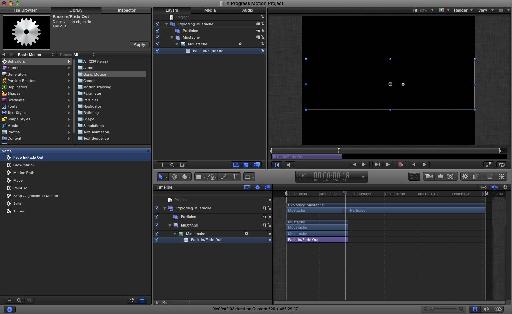 I'll start my Particles group at 15 frames, add a Fade In/Out behavior with In set to 3 and out set to 60. With the Particles group selected, I'll hit 'C' for the circle tool. Holding the Shift key to constrain me to a perfect circle, I'll click and drag inside the Canvas, to create a very small circle shape. This will be the basic shape of my exploding particles, naming it 'Particle Source Circle'. 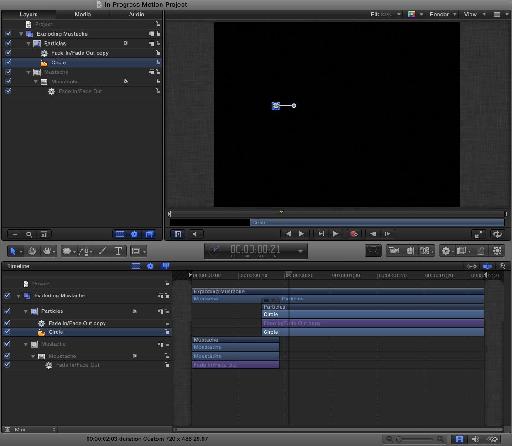 With my newly created circle selected, I'll go to the Object menu, to Replicate, or use the 'L' shortcut. Notice our original shape layer has its visibility turned off automatically. The Replicator uses it as a source for it's cell sub-layer, or internal shape generator. The Replicator layer now has a sub-layer named 'Particle Source Circle'. To avoid confusion I'll rename it 'Cell'.

F4 will take us to the Replicator tab. Changing 'Shape' to 'Image', I'll drag my mustache graphic into the Image Source well. Setting 'Arrangement' to 'Random Fill', Emission Alpha Cutoff to 100%, and 'Points' to 5000. That means we will have 5000 individual particles in our explosion. Now to make our particles look like the mustache. Down in the Cell Controls block of our Replicators tab, set 'Color Mode' to 'Take Image Color'. 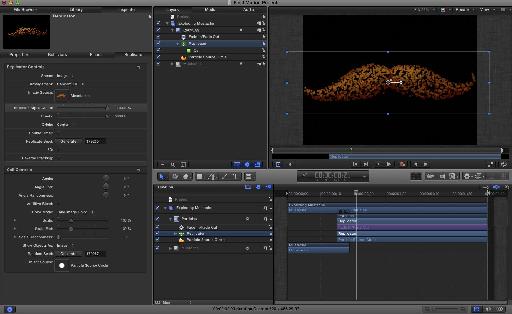 With the Replicator layer selected, Command-2 for the Library, to Behaviors, to Simulations, then apply the Random Motion behavior to our Replicator. This makes our particles fly all over as if we were working with an Emitter. Except a Replicator in this case allows us for much greater control over what our particles do.

I'll make sure 'Affect Subobjects' is checked, set Amount to 5000, Frequency to 2, Noisiness to 0.5, Drag to 0, and for 'Include' be sure X, Y and Z are all three selected. Dark grey, they are active, light gray, they are inactive. Now are particles fly all over, we'll bring that under more control next.

Playing back what I have so far, I have a static mustache, then it seems to explode into a bunch of tiny particles. But the particles are way to random. 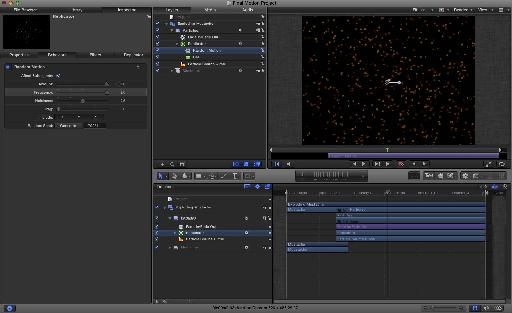 In our final step, I will create a Null Object that will repel all of the particles outward as if being violently forced away from the center of the mustache, the source of the explosion. Be aware that we will be compositing this onto an image of Dan himself, along with two actual explosion clips, flames and all.

I'm going to use 'C' to get my circle tool and draw an oval in the center of what would be the intact mustache. This should be in the Particles group. I will rename it 'Repulsion Circle'. 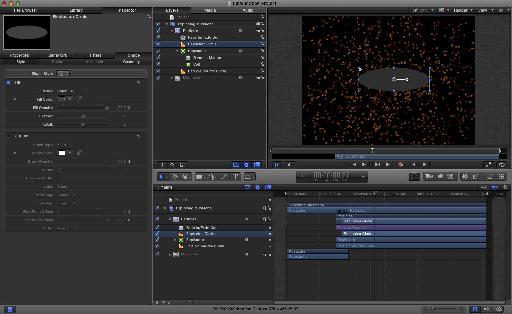 Here's the cool part. I will Command-2 to the Library again, Behaviors, Simulations, and apply the 'Repel' behavior to my new Repulsion Circle layer. F2 takes me to the Behaviors tab where I'll set Affect to Related Objects, Strength to 500, Falloff Type to Linear, Falloff Rate to 1, Influence to 1000, Drag to 20. For the 'Include' section, I only want to effect X and Y, so the Z activation button should be light gray.

Finally, turn off the Repulsion Circle's visibility checkbox, leave the checkbox for the Repel behavior turned on. This is a Null Object, it is invisible, but has a behavior attached to it as to effect the movements of other objects that are visible.

You can play the project back and adjust the position of the Repulsion Circle layer to get things to explode outward in just the right manner. 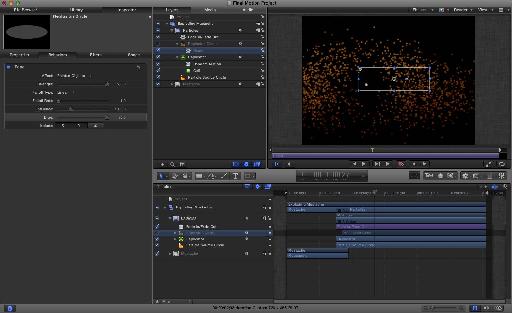 I'm going to bring this in to FCP X for compositing, due to the complex music, sound effects, and other audio tracks I need to deal with. I need this to have an alpha channel, meaning everything that is black background, has to in fact be invisible. So I'll select the Project layer at the top of the Layers pane, and go to the Properties tab. Verify that 'Background' is set to 'Transparent'. Then I'll use Command-E to export my Quicktime movie file. In the export window I'll set Export to ProRes 4444. We refer to this verbally as ProRes 4 By 4. It supports the full 444 color sample range, plus a full alpha channel. That's the color channel that relays what parts of the frame are supposed to be invisible. Not all formats support an alpha channel. Open with set to None, Include to Video Only, Duration to Entire Project. 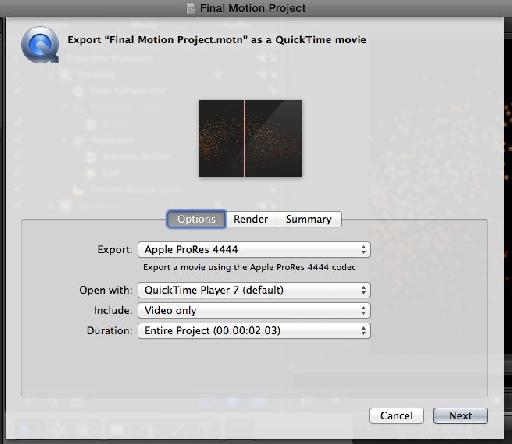 For good measure, I'll next go to the Render tab of the export window. Here I'll set Color to Color + Alpha, as I really need that alpha channel, so Dan shows through in the final composite. I can then set the other controls as desired. 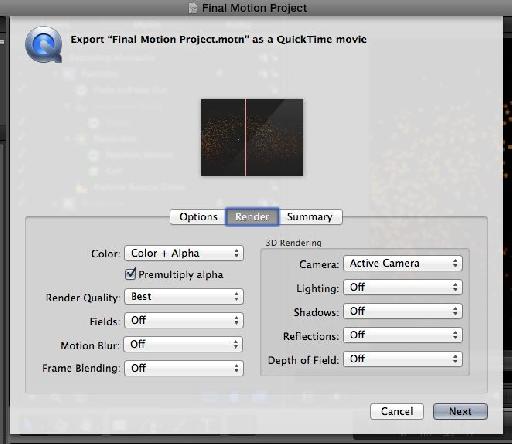 When this Quicktime movie exports, I can import it into Final Cut Pro X or any other appropriate application. When layered in a composite with other images, I will see the exploding mustache effect, and anything that is not actual mustache will be invisible.

This is a pretty easy trick to pull off once you understand the basic mechanics. Using a Replicator with simulation behaviors helps us achieve the particle emitter like effect, but with much more precise control over what our particles do and how they act. If you are really interested, I suggest getting a green screen shot of someone moving. Then make them explode, or turn to dust and blow away in the wind. Just have fun with it.

Dream It. Do It.
Do you want to learn Animating Effects?
Yes, I want to learn!
No Thanks, I just want to read the article.
Feedback
How are we doing?
We'd love your thoughts, feedback and questions regarding our new site. All feedback is appreciated!
We do not respond to this form! If you need support, please visit our support page.
Thank you for your input!
Your message has been successfully sent
Course Advisor
Don't Know Where To Start?
Ask A Course Advisor