All Articles Final Cut
FCP X: Busting the Myths
Iain Anderson on Fri, September 14th 4 comments
Language
Since its launch, Final Cut Pro X has had been praised and pulled apart in equal measure - much of the later unfairly so. Iain Anderson explains why.

When Final Cut Pro X was released, a thousand editors suddenly cried out in terror. Far from being silenced, however, the noise continued as a rolling grumble, audible as background noise to this day. At release, FCP X was far from perfect, but it's changed. While many (not all!) of the feature gaps have been plugged since release, I still hear the same old criticisms levelled against it. To halt further misinformation, here's rebuttal to a huge list of perceived, overheard, incorrect criticisms of Final Cut Pro X, and a few workarounds and solutions to genuine issues.

1. The magnetic timeline is horrible! (Easy once you get used to it.)

In most cases, for most users, the magnetic timeline is a huge win '" so long as you can forget the way you used to work. A couple of cases (music videos spring to mind) require a slightly different approach, but most edits are far easier. Simply re-ordering two clips in FCP 7 required specific modifier keys to be held at specific points during the operation, and it could still go wrong and send media out of sync. That can't happen any more. You can still disable the default rippling behavior by choosing the Position tool. 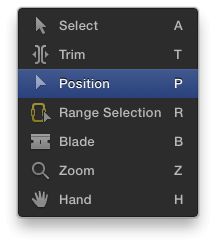 Choose this tool to disable ripple.

This is a pretty specific request. Dynamic trimming in FCP 7's Trim Edit window was an option that let you move an edit point when you paused by pressing K. The space bar wouldn't work; you had to be using J-K-L for playback. While I'm sure there's a ton of muscle memory behind the request for this feature's return, you can almost do it today.

In Final Cut Pro > Commands > Customize, define an additional key, Shift-K, for Extend Edit. Enter the Precision Editor with Control-E. Press Up or Down to get to the edit your want to change, and select which part (ripple outgoing, ripple incoming, or roll both) you want by pressing [, ], or \. Now play with J and L, and press Shift-K to pause. Slightly less dynamic, but dynamic nonetheless.

This command nearly gets you Dynamic Triming.

3. Gang sync is impossible without a second viewer! (Workarounds for now, and returning soon.)

Specific again, but our own David Smith has written an entire article on simulating Gang Sync with Multicam. Even better, Apple have said that an optional second viewer is coming in a future release.

FCP 7 automatically saved the last used In and Out points on a clip. FCP X does not, but the new way is more powerful if you get used to it. As before, use I to mark In and O to mark Out, then press F to mark as a Favorite. Better than the old version, as you can now mark several Favorites in a single source clip, then view Favourites Only from the drop-down at the top left of Events to just see your Favorite clips. Far more power, far less fragile, one extra key press.

At launch, this didn't perturb me too much; I wouldn't switch apps in the middle of a project anyway. New projects in FCP X, older ones in FCP 7. But every editor is different, and some need to re-open older projects in the latest app '" fair enough. At launch, you couldn't do this. Now you can, and the app that allows it, 7toX for Final Cut Pro, costs $10.

Importing older files, by the way, has never been better. Importing my ancient DV tapes finally shows the date and time of shooting '" something FCP 7 never did. 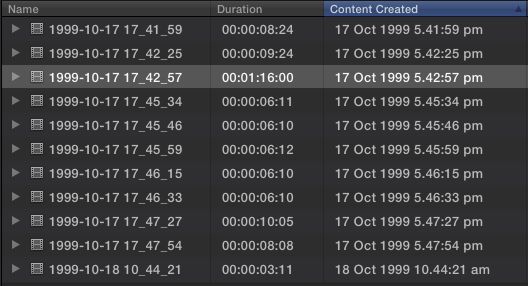 Again, at launch this was an issue. Now, you can buy additional programs to export to Pro Tools via AAF (X2Pro Audio Convert), export to FCP 7 (Xto7 for Final Cut Pro) or export to EDL (EDL-X). Other programs, such as DaVinci Resolve, will roundtrip with FCP X directly. This is largely now a non-issue.

Collaboration is also possible '" you can share both Events and Projects, relinking to local copies of Events if desired.

Partly true. You can't export to DV or HDV any more. Importing is fine, and I have to admit I stopped caring about exporting to these legacy formats many moons ago. In the professional space, it can still be important to output to tape, so how do you do it?

Well, it's never been possible to work with pro tape formats in FCP without an additional hardware device of some kind, like those from AJA, Kona, Matrox or Blackmagic. These companies also make software which performs the now-missing tape-related functions. All you need to do is export a QuickTime movie and use that new app to dump to tape. Done.

8. Multicam is missing! (Back and better than ever.)

Yes, another feature missing at launch. Sorely missed if you used it, this feature came back with a vengeance in the big 10.0.3 update. Now supporting 64 angles at mixed frame rates and mixed resolutions with automatic angle syncing, it's better than ever. Here's an article our own Kiri C. Roberts wrote about it.

9. You still have to transcode your media! (No, you don't, and never have.)

I don't know how this one got traction '" one of the key points of FCP X at launch was that transcoding is no longer necessary as it was in FCP 7. Here's an article I wrote on The Truth Behind Performance with Optimized Media. If you still want to transcode, that's fine '" and you can work with the native media while your Mac is transcoding to ProRes in the background. You can start even editing as soon as you've begun the ingest process, before it's even copied from the camera or card '" everything seamlessly switches as local and/or transcoded media becomes available. Nothing wrong here.

Transcoding is very much optional on import, or after import.

Again, introduced after launch, but the major players have their solutions in play and working. You can use professional monitors with FCP X, and this feature left 'beta' in 10.0.4.

FCP X does allow for a wide range of video resolutions and frame rates '" certainly pretty much anything supported by a camera. For odd formats, such as a vertically oriented display, there's a workaround. Create a movie that has the size and frame rate you want '" MPEG Streamclip will let you export any movie to any size, so that's one way to get there.

Import the new movie into an Event in FCP X. Right-click, and choose Open in Timeline. Be sure to add some new video before you delete the original video, but that's about it. You can export in the normal way with the Share menu.

On release, FCP X allowed you to relink entire Events '" and it still does. However, FCP X now allows you to reconnect individual files as well. Many used to complain that Avid's media management (where it looked after everything for you) was superior to FCP 7 (where it expected media to be in the same place forever). FCP X now manages your media for you  '" unless you tell it not to '" making it more Avid-like. Media management is one area where you seemingly can't please everyone, but FCP X is better than it used to be. 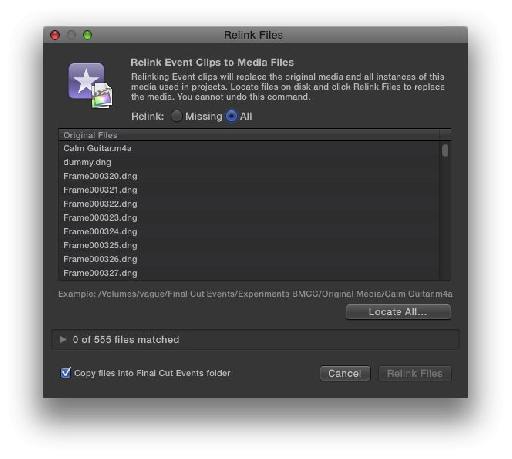 Manually relinking Event files, should you need to.

13. Importing Photoshop files for titles doesn't work! (Yes, it does.)

Not at launch, but working fine now. Still, it's a horrible workflow. Creating a custom title in Motion has never been easier or more powerful and is vastly superior in every way.

14. Apple have deserted the Pro market! (Not yet.)

While it's true that there was no truly new Mac Pro this year, Apple's CEO, Tim Cook, has stated that there's a significant update coming next year. Many features in FCP X are purely for professionals (Roles springs to mind) and they're not nearly done with the app yet. RED support, multichannel audio editing, MXF plug-in support and more are coming soon.

Apple aren't afraid to change workflows '" sometimes quite significantly '" and that's what happened with FCP X. It's different, true. But it's also better in many ways.

Iain Anderson
Iain Anderson is an editor, animator, designer, developer and Apple Certified Trainer based in Brisbane, Australia. He has taught privately and in tertiary institutions, and has freelanced for Microsoft and the Queensland Government. Comfortable with anything from Quartz Composer to Second Life and Final Cut Pro to Adobe Creative Suite, he has laid out books, booklets, brochures and business cards; retouched magazine covers and product packaging, shot and edited short films and animated for HD broadcast TV, film festivals and for the web.
Related Videos
Comments (4)

Dream It. Do It.
Do you want to learn DSLR Workflows?
Yes, I want to learn!
No Thanks, I just want to read the article.
Feedback
How are we doing?
We'd love your thoughts, feedback and questions regarding our new site. All feedback is appreciated!
We do not respond to this form! If you need support, please visit our support page.
Thank you for your input!
Your message has been successfully sent
Course Advisor
Don't Know Where To Start?
Ask A Course Advisor