One of the most powerful, hidden features in Final Cut Pro X is made possible with Motion, and an unusual workflow. By using a Text generator'"without the text'"you can apply effects to multiple items at once. Add Auditions into the mix, and suddenly you can change the look of your whole edit with a single keystroke. Curious? Let's go.

Step 1 - Create a Title in Motion

This part is easy, but you will need Motion 5. There's never been a better buy for $50, so if you don't have it, head to the Mac App Store and grab a copy. Now, create a new document, then pick Final Cut Title from the Template chooser. While not critical, it's probably a good idea to set your usual video standard in the top right corner. 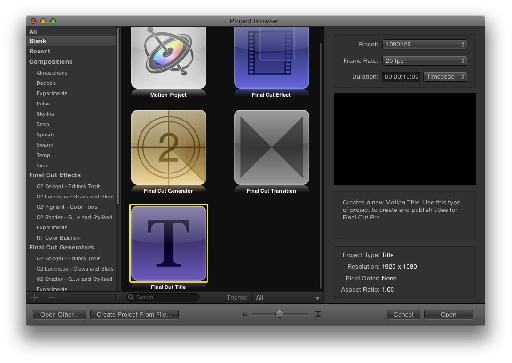 We only want the background element and don't need the text, so let's get rid of it: Open the Timeline window (Command-7) or the Layers window (Command-4). Click on the  element called 'Type Text Here', and press the Delete key. 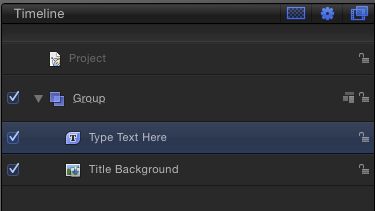 Choose File > Save. Call the Template 'Adjustment Layer' and choose a Category (create one if you need to). I'm using 'Experiments'. The Title will be accessible in Final Cut Pro X straight away. 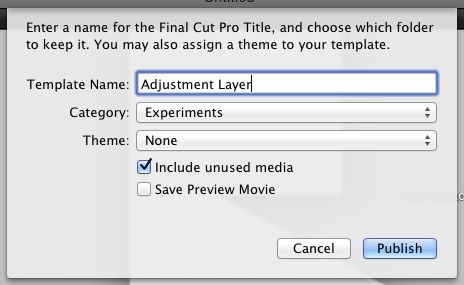 Open (or reopen) Final Cut Pro X. Open a project of your choice, as complex as you wish. Open the Title tab by clicking on the T icon to the right of the Toolbar. Find the Adjustment Layer title you created and drag it to above part of your project. You should see no change in the video after you do this. 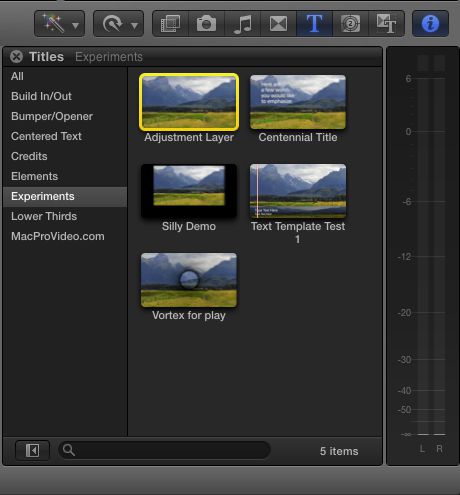 Open the Effect tab, four icons to the left of the Title tab. There are plenty of video and audio effects here, but we'll focus on video: Choose Looks from the list of effects on the left. Locate Dream, and drag it onto the new Adjustment Layer clip. Like magic, everything underneath it is affected by the effect. This is a powerful tool. Not only can you affect a single clip, you can affect a composite of several clips: a picture-in-picture, a clip with a regular title above it, or two or more clips with a transition between them. You could even affect your entire project, just by trimming the edges of the Adjustment Layer to cover everything. A very neat trick indeed. 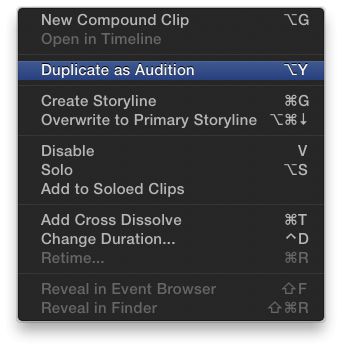 Auditions is a powerful concept that lets you switch between different clips '" or different versions of the same clip '" live on the timeline. It's much more flexible and easier to manage than trying to enable or disable several copies of our Adjustment Layer. One factor to be aware of: the length of each clip in the audition is stored. If you make one of the auditioned clips longer, the others will stay the same length. For this reason, it's best to get the length of the clip right before choosing Duplicate as Audition.

Step 7 - Change the settings on the new duplicate

Open the Inspector if it's not open already, and choose Video. Select Dream and press Delete; you don't want multiple effects applied at once, at least not yet. Find the Glory effect in the Effects tab and drag it to your Adjustment Layer once again. Because we've switched to a new version of the Adjustment Layer, we won't cause an effect-double-up. 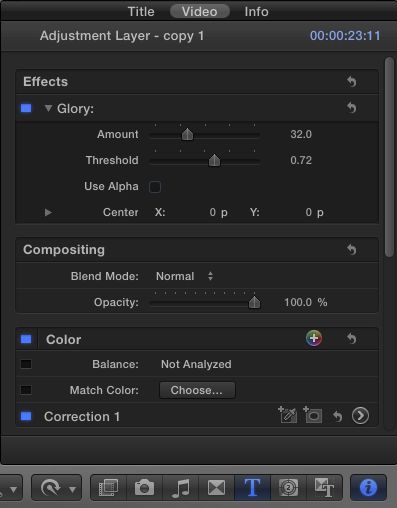 Take a look at the left-hand end of the Adjustment Layer clip in the timeline. You should see a spotlight, indicating that that this clip is part of an Audition. Click on the spotlight, and you'll see an interface which lets you choose either of the two clips that are currently part of the audition. While you're here, press the Duplicate button, then remove the Glory effect using the Inspector. Now, find the Memory effect (also in Looks) and drag it to the clip in the timeline. You now have three looks to choose from.

There are shortcut keys which let you cycle between auditioned clips, but unfortunately they clash with Lion's pre-defined shortcuts for switching between Spaces. Let's define some new ones: Choose Final Cut Pro > Commands > Customize. In the top right corner, type 'Audition' and look in the center of the window, at the bottom, to see the commands that reference auditioning. Next Pick and Previous Pick are the commands you need, but Control-Left Arrow and Control-Right Arrow are taken. 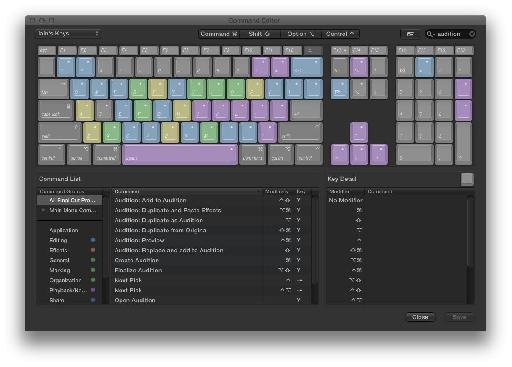 Click Option and Control at the top of the window. You can now see the keys that use Control and Option at once'"very few. Drag Next Pick from the bottom of the window onto the right arrow key. If you've never customized keys before, you'll be prompted to create a new command set (press OK). Now, drag Previous Pick onto the left arrow key. Press Save, then Close. Select your Adjustment Layer audition in the Timeline. Press Control-Option-Left Arrow and Control-Option-Right Arrow to switch between the different adjustment layers with the different looks. Much quicker and more interactive than before, this is the kind of power which comes in very useful with a client hovering over your shoulder.

So, what else can you do other than switch looks? First: not just looks, but any effects you can apply from the Effects tab. Broadcast Safe? Sharpen? Black and White or Sepia? How about Photo Recall or one of the other Stylize effects? If that's all a little too heavy-handed, you can also use the color correction features in the Inspector to adjust color manually.

With this technique, you won't have to re-correct every clip if the director changes his mind on the overall look for an edit. Grade each clip normally, to make them match one another, then put an Adjustment Layer on top and tweak everything together. Cooler? Warmer? Easy. And when the director changes her mind? Duplicate and add to audition, tweak the new copy, and then show them an instant before-after comparison. Best of luck.

Dream It. Do It.
Do you want to learn Titles, Effects and Compositing?
Yes, I want to learn!
No Thanks, I just want to read the article.
Feedback
How are we doing?
We'd love your thoughts, feedback and questions regarding our new site. All feedback is appreciated!
We do not respond to this form! If you need support, please visit our support page.
Thank you for your input!
Your message has been successfully sent
Course Advisor
Don't Know Where To Start?
Ask A Course Advisor