To accompany the release of the new macOS 10.15 Catalina this week, Apple updated Final Cut Pro X, Motion and Compressor, moving FCP X from 10.4.6 to 10.4.7 . But it’s not just a simple bug fix update. While there are no huge user-facing features this time around, there are big — and inevitable — changes under the surface, and they do bring benefits. For this release, only macOS Mojave (10.14) and macOS Catalina (10.15) are supported, so if you’ve been hanging on to High Sierra (10.13), it might be time to move up. Let’s dig in and see what’s changed.

The big new feature is all behind the scenes: that the rendering engine has shifted to Apple’s new Metal API, replacing the deprecated OpenCL and OpenGL. The Metal update promises speed boosts in editing, rendering and sharing for all Macs from 2012 or later — anything current. The change also allows FCP X to take much better advantage of external GPUs (which you can now explicitly choose in preferences) as well as the huge potential performance of the GPUs and Afterburner card in the upcoming Mac Pro. 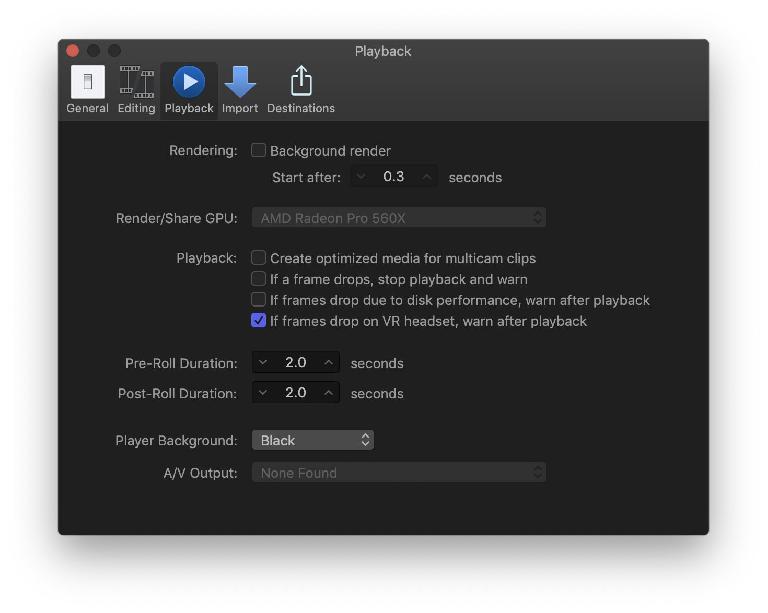 Here’s the new GPU choice — if you connect an eGPU, you can choose to activate it here

Apple’s claims of a 20% speed boost certainly hold up on my MacBook Pro 15” (2018), where I performed a series of tests on a music video I recently edited. The complex timeline includes tricky transitions, multi-clip compound effects, speed changes and adjustment layers with a variety of HD, 4K and 5K compressed footage. FCP X 10.4.6 required rendering or proxy generation before it could play complex sections smoothly, even when set to Better Performance. But in 10.4.7, playback is noticeably smoother, and it only dropped a few frames on the most complex parts of an unrendered timeline, without proxies.

Multiple averaged export tests on my MacBook Pro back this up too. The 3:20 project took 6 minutes to export to 1080p ProRes under 10.4.6, but just under 5 minutes under 10.4.7. Fans kicked in earlier during export, but that’s a small price to pay for a big jump in performance. Obviously there’s a huge variety of Macs out there: desktops, laptops, with and without real GPUs and external GPUs, so your mileage may certainly vary. Will this update let a MacBook Pro with a powerful eGPU compete with an iMac Pro? We’ll see.

Colors Are Easier To Select

One new user-facing feature did sneak into this release, though it’s a subtle one. For some time, color correction and other effects have been able to be masked by a shape or color selection. Previously, a color mask had to be created by clicking and dragging directly on a target color in the viewer — and you still can — but you can also now switch to directly modifiable Hue, Saturation and Brightness controls.

Dragging the top edge of a control moves the range edges, while dragging the bottom half moves the falloff. This makes some kinds of color masks much easier than before, and will be especially handy for skintone corrections. As a final bonus, this color mask can be see in the Video inspector as well as the Color inspector.

The headline features: a Metal upgrade, plus HDR improvements and support for the new Mac Pro. Minor features include a number of bug fixes, plus a new export window that looks and works much more like the FCP X export window. Tabs along the top expose all the options clearly, a Highest Quality button sets everything to max, and you no longer need Compressor for background encoding. All welcome, though of course more feature updates would have been even better. 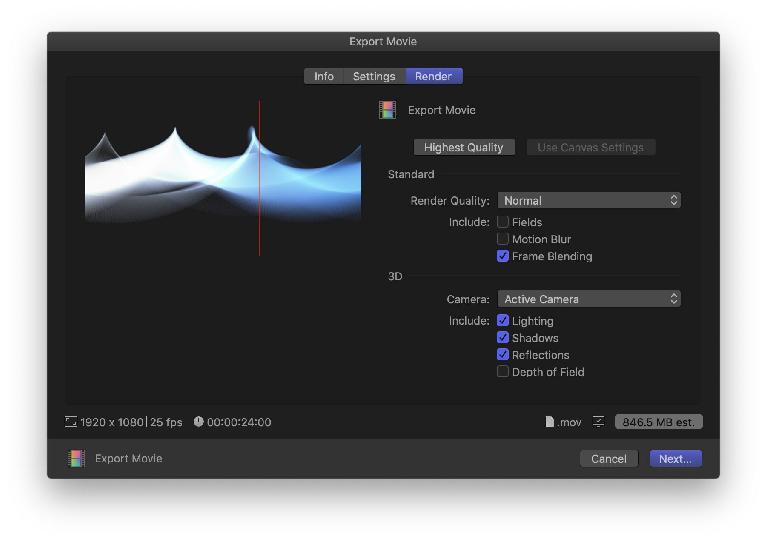 Exporting is now more like FCP X, with a Highest Quality setting for convenient final exports

The same short list of headline features are present in Compressor, and there don’t appear to be any other improvements here.

If you’re in the market for Apple’s amazing-but-pricey Apple Pro Display XDR, you’ll be happy to know that FCP X now can make use of three of them. If you want, two can handle the FCP X interface, and one can be used for final monitoring.

Working with HDR formats has also become a little easier in general, as you can now intelligently map an HDR timeline to a regular SDR display. This means you don’t strictly need to buy an expensive conversion box and HDR monitor to view HDR content. Given that iMac displays can show pixels brighter than SDR but not as bright as HDR standards, this is a happy compromise, but colorists will still need a fancy HDR monitor for final monitoring.

However, you’ll need to update to macOS Catalina for this feature, and a few others.

Catalina Giveth, And Taketh Away

As well as the HDR improvements, the brand new macOS Catalina (10.15) allows you to use an iPad as an external display, and that includes use as an external monitor in FCP X. But it’s early days for this OS, and Catalina changed a lot behind the scenes too. Older 32-bit apps will no longer launch at all, so say goodbye to QuickTime Player 7, MPEG Streamclip, and others. It’s not just 32-bit apps that are going away; Aperture is 64-bit but also won’t launch. Older apps in general are vulnerable to issues with any OS update, but this update in particular could cause significant issues. 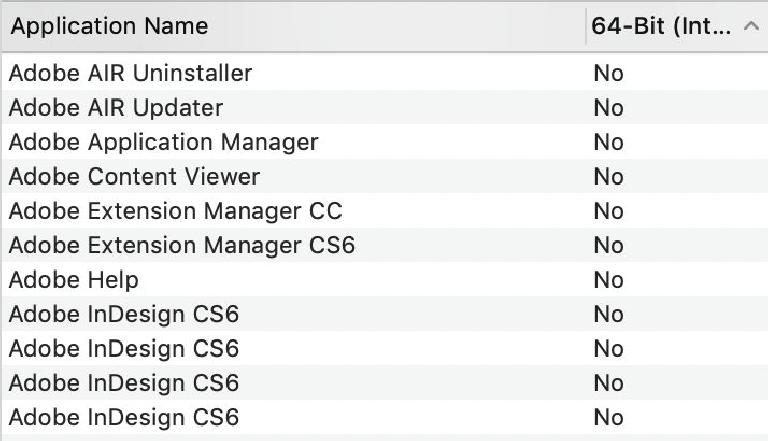 Choose Apple Menu > About This Mac > System Report > Applications to see which apps are 32-bit and facing their last days, like InDesign CS6

On the happy side, the new QuickTime Player in Catalina reintroduces several video-friendly features, including the ability to open an image sequence, so maybe QuickTime Player 7 won’t be missed after all.

For many sensible reasons, you should never update FCP X in the middle of a project. Finish current projects, back up your libraries, and compress your existing apps in the Finder. Update the apps, open up recent libraries, and make sure everything works. (If it goes bad, throw away the new apps, uncompress the old ones, and restore your library backups.)

Do this before you update FCP X, and the compressed older version will remain in case you need it

Even more important: don’t update to any new macOS version until those braver or more foolish than you have done it first. When a couple of point updates have been released and the waters look calm, back up your whole system, and proceed with caution.

This release of FCP X won’t please everyone. There’s no dupe detection, no advanced audio mixer, no scrolling timeline. But the move to Metal in Catalina, and the new multi-GPU plus accelerator in the Mac Pro meant that FCP X’s underlying engine had to be reworked completely, and that took a lot of developer time and effort. The fact that they’ve done this, while providing a substantial performance boost along the way, is commendable. 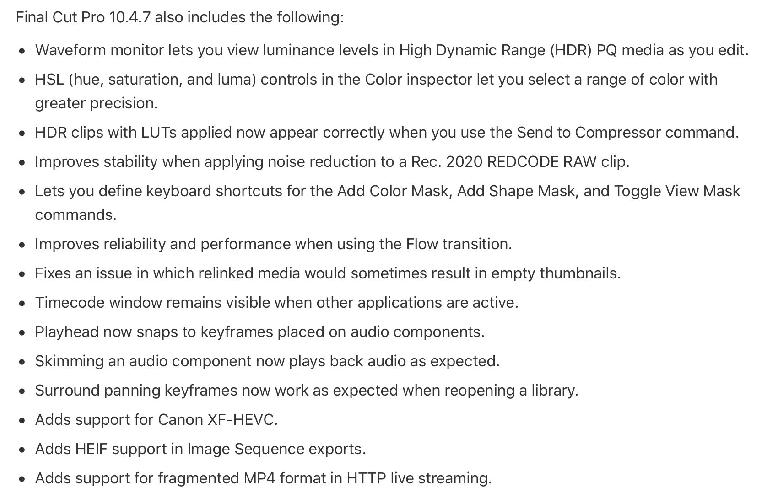 At the same time, it’s still a shame that more new features haven’t been added. Still, with the major architecture changes of Catalina and the Mac Pro complete, the way is now clear for more exciting updates in the future. Let’s hope they arrive sooner rather than later. 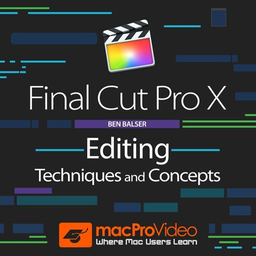 Dream It. Do It.
Do you want to learn Editing Techniques & Concepts?
Yes, I want to learn!
No Thanks, I just want to read the article.
Feedback
How are we doing?
We'd love your thoughts, feedback and questions regarding our new site. All feedback is appreciated!
We do not respond to this form! If you need support, please visit our support page.
Thank you for your input!
Your message has been successfully sent
Course Advisor
Don't Know Where To Start?
Ask A Course Advisor