When running any video editing application there will be specific hardware specifications that must be met in order to assure smooth, quick, stable system performance. In this article I will go over the basic hardware requirements and best practices for Final Cut Pro X. We will look at each component of an Apple Macintosh computer that impacts FCP's performance, and give a basic explanation of its role, how it works, and what the real world minimum should be. This can not only help with initial purchase and upgrade decisions, but also with troubleshooting performance issues.

Often referred to as CPU, this is the central brain of your Mac. It is not upgradeable, but all Macs on the market meet FCP's minimum requirements now. OS X 10.6 and beyond, running on an Intel CPU Mac, is 64-bit which allows for applications to access multiple CPUs at once. Thus, the more CPU cores the more power you'll have. FCP takes advantage of this. A core is like an independent CPU, that works in unison with the other cores. In the past, we had to balance CPU speed, measured in Giga-Hertz (GHz), and the number of CPU cores, to find the optimum Mac to meet our budget. As of this writing, most models are either dual-core or quad-core configurations, making a choice based on price is much easier. Your budget will easily determine how many cores and at what speed your CPU configuration will be. The major balance for today's Macs and FCP are between CPU and GPU as we will see next. Faster CPUs will help with faster boot times, faster app launches, faster loading and accessing the Event and Project databases into RAM, faster more stable performance when doing things such as trimming edits, adjusting audio, etc. 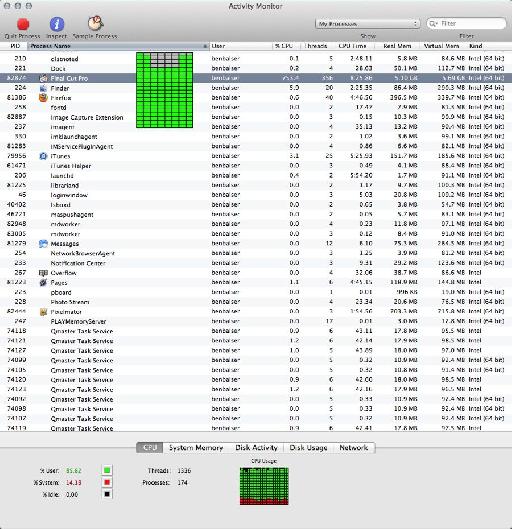 Simply referred to as GPU (Graphics Processing Unit), this actually plays a more important role in a Mac setup for FCP editing. FCP X now makes great use of the GPU. When selecting a Mac, personally I'd aim at the top-end GPU, and not worry as much about the CPU. Any quad-core CPU will be optimum, regardless of speed (although if you can afford both, go for it). So spend money on the GPU over CPU, if you have to choose on a tight budget. All Macs now have set GPUs built in. The older Mac Pros have PCIe slots you can upgrade to more powerful, faster GPUs. Now even the new Mac Pro has them built in with no upgrade options. This makes picking a Mac with the most powerful GPU imperative right up front. Playback & exporting, the two most important functions, are going to improve greatly with more GPU power. Apple states FCP needs a GPU with at least 256 VRAM (video RAM on the GPU card) with 512MB recommended. I will say that is actually too low for professional work and your GPU should have at least 1GB VRAM, if not 2GB. All Macs on the market meet the minimum resolution requirements, which is 1280x768. It is also vital to be sure your GPU is not only OpenCL compatible, but also on the FCP approved list.

RAM is one of two components we can upgrade in most desktop Macs now. RAM in laptops is built in and can't be upgraded, thus you'd want to get the maximum amount of RAM possible right off the bat. Apple states that FCP X requires 2GB RAM (4GB recommended) minimum. That is not 2GB of RAM in the Mac, that is 2GB of RAM available for FCP X to use, while the OS and other applications are running. In the real world, the minimum a Mac should have installed is 8GB if not 16GB of RAM for FCP X use. Newer Macs have faster RAM (yes, RAM comes in different data throughput speeds). Faster RAM means better FCP X performance. RAM is important because it is where the databases for Events and Projects are stored for FCP X to work with them quickly and smoothly. These databases can take up a bit of room when you get into larger projects. When the system runs out of physical RAM, it starts using virtual RAM, which is writing date to and from the hard drives, which slows the system down. So not just faster RAM cards, but more RAM can actually make database, metadata, and the usage of interface tools run faster and most smoothly. It may not effect import, playback, and export at all.

If you use Activity Monitor or some third party application to monitor RAM usage, you probably won't see all your RAM used. The operating system will always strive to keep some physical RAM free, and will move some storage to virtual RAM for this purpose. Usually it is OS function data that get moved to virtual RAM first. This technically still can effect overall system performance.

Most desktop Macs allow for RAM upgrades (except for the current 21.5 inch iMac model). You can save some money often by purchasing a Mac with its minimal amount of RAM, then purchasing the larger capacity RAM from a third party and installing it yourself. It is actually very easy to install. Be sure to purchase from a well known, reputable vendor, as there are sources that will sell you less than reliable RAM cards. 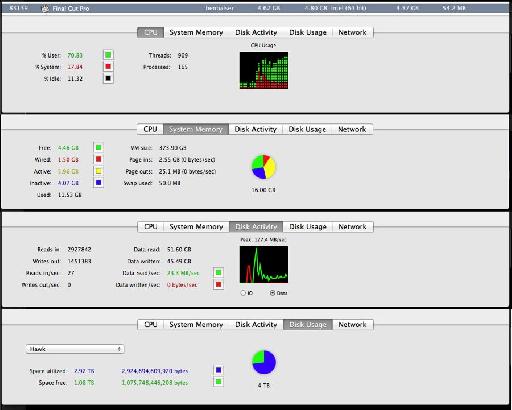 This is the one component end users have the most control over. This is also the slowest component of any computer system. Being a major bottleneck, you want to overcome that with as fast of a drive configuration as you can afford. The OS and applications need enough data bandwidth to run smoothly. Just like your Internet connection at home. It can only upload and download data at a limited speed. Drives are the same way. Video editing uses multiple video and audio streams, live in real time, and can eat up a drive's bandwidth quickly. Thus, we leave the OS and applications on the internal system drive, and place all of our Events, Projects, and media on a secondary drive. This secondary drive is more times than not an external drive. Internal secondary drives will usually be in an older Mac Pro and are SATA. These are really nice for video editing. But when we move to laptops and newer desktop Macs, we need to go with external drives, so I'll discuss these. First let us look at the different types of drives themselves.

There are three types available: spinning disk, solid state, hybrids. Spinning disk, or HDD drives have platter that spin like DVDs do. They come in 5400 RPM and 7200 RPM speeds. For video editing, 7200 RPM is pretty much mandatory. It can read and write data to and from the spinning disks much faster. And unlike cars, the larger the drive the faster it will read/write data. That is because larger drives can have more spinning disks inside. An HDD is not simply one spinning platter, but 2 or more. The more platters, each having its own read/write head, the faster it can access data.

The drawback is that spinning disk drives crash and die more often than solid state drives, due to the mechanics of an HDD. They are also the slowest drive type.

Solid state drives, or SSDs are much faster at reading and writing data. Since there are no moving parts, an SSD crashing is theoretically more rare than an HDD. Faster speeds mean they are better for video editing. The drawback is they do not have the storage capacity of, and are much more expensive than HDDs.

Finally we have hybrid drives, or as Apple has branded their own version of this, the Fusion Drive. This is an enclosure that has one SSD and one HDD drive in it. The OS and most used files are on the SSD side for speed. Lesser used files are on the HDD side for larger, more affordable storage capacity. These are a very good choice for the internal system drive in a Mac. 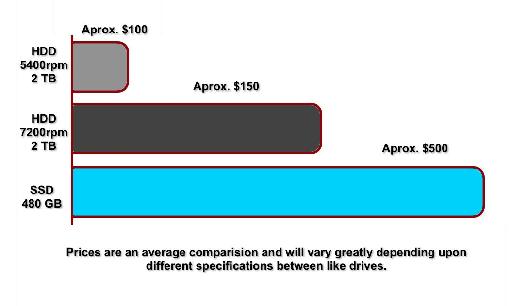 We have several choices of how to connect our secondary drive, which will hold all of our Events and Projects, to our Mac. The slowest and absolutely unacceptable for video editing is USB 2.0. The newer USB 3.0 is fast enough and very good for video editing. Be sure your Mac does in fact have USB 3.0 ports on it, or your brand new USB 3.0 drive will drop to the port's 2.0 speed, defeating the purpose.

External SATA (eSATA) is a wonderful option when used with RAID enclosures (see below). The draw back is that only a Mac Pro with PCIe slots, with an eSATA PCI card can give you the advantage. There are Firewire adapters that allow eSATA to connect to a FW800 port, but you sacrifice and don't get the full speed eSATA can really deliver.

Firewire 800 has been a long standing staple of video editing for external, secondary drives. I consider them just barely fast enough for high definition editing, and too slow for heavy compositing and complex multicam editing. Given the choice, go with USB 3.0 long before using FW800. But if you don't have a choice, FW800 is the way to go, instead of the unacceptable USB 2.0. 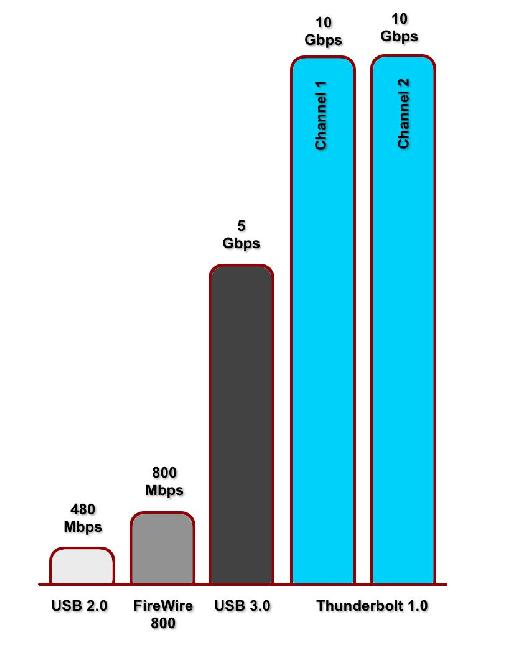 If you have the money, a top of the line Mac with the largest number of CPU cores, fastest CPU speed, most powerful GPU, maximum RAM, and fastest Thunderbolt SSD drives would be ideal. But many independent editors don't have that type of cash just laying around. So balancing out what you can afford, knowing which components will effect your FCP X experience, and how they impact FCP X, can help you more easily chose a new Mac. This information can also help you decide what to upgrade, or even help with troubleshooting performance issues when you run in to them.

Ben Balser
Ben Balser studied educational psychology at Loyola University, and after retiring from a 20+ year IT career, now produces, consults, teaches, and rents equipment for media production as a full time job. As an Apple Certified Master Trainer, he ran the Louisiana Cajun Cutters FCP user group for 8 years, taught post-production at Louisiana State University and has lead their annual teen filmmaking bootcamp. He teaches currently for AATC facilities across the USA and for The Orchard Solutions. He has consulted for higher education, government, broadcast and private production facilities.
Related Videos
Comments (2)