All Articles Audio Hardware
Lightning Quick! Why Thunderbolt will be the I/O of Choice for Digital Musicians and Video Artists.
Rounik Sethi on Thu, March 3rd 5 comments
Language
Hands-up who wants low-latency and high performance multi-track audio recording on their Mac? Me too... as well as almost every Computer musician I've ever met! Until now Firewire and USB 2.0 have bee

Hands-up who wants low-latency and high performance multi-track audio recording on their Mac? Me too... as well as almost every Computer musician I've ever met! Until now Firewire and USB 2.0 have been the most popular connectivity options for most audio and video Prosumer hardware, but with the release of USB 3.0, which appears pretty decent, it looked like the next chapter in I/O had been written. I'll be honest. I'd been confused as to the lack of USB 3.0 ports in the latest Mac's... But I finally understand the reasons for that now. The future I/O of the Digital Music Studio has arrived... and it's not USB 3.0!

If you've been hiding under a rock this past week, you may have missed the much anticipated MacBook Pro announcement from Apple (24th February 2011). Along with the powerful Quad-Core Sandy Bridge i7 processor, a new Input/Output technology was unveiled with much fan fare. Widely tipped to replace Firewire, it's official name, Thunderbolt, was finally revealed. Instead of merely replacing Firewire and being a run-of-the-mill competitor for USB 3.0, Thunderbolt looks set to completely redefine the I/O landscape for Audio and Video professionals and their peripherals for many years to come.

In my opinion, the thing about I/O connectivity for digital musicians has always been three-fold. Let me explain. First, I'm always looking for audio interfaces with optimum performance, leading to lower latency when recording and a large throughput for recording more simultaneous audio inputs (multi-track recording).

Second, it's all about compatibility. PCI-Express has been the choice for many Pro's in the Audio and Video fields for connecting interfaces, DSP cards, etc. Since 2008 if you wanted to buy a portable Mac setup with high-speed connectivity, the 17" was the only option. Then there's the familiar story of trying to plug in your Firewire audio interface to your friend's PC or an older/newer Mac which doesn't share the same ports. No fun!

Thirdly, and finally, no digital musician wants a plethora of wires and cables dangling everywhere. Safety hazard? Possibly -- but, it certainly takes away from the portability factor of my MacBook Pro. It's common on my MacBook Pro that the DisplayPort is connected to an external monitor, two USB ports are feeding my MIDI Controller, Mac Keyboard and Magic Mouse, a Firewire 800 is used for an external hard drive to record to and my trusty Apogee Duet is connected to my remaining Firewire 400 port... and I haven't mentioned the PCI-Express slot yet!

Wouldn't it be great if there was one port that could connect all my hardware devices to my Mac with enough bandwidth for multiple high-performance devices and support for existing I/O standards? Read on!

One Connection to Rule Them All

Designed by Intel in collaboration with Apple, Thunderbolt (code named Light Peak during production), is based on Intel's high performance PCI Express technology and Apple's DisplayPort. In fact you can plug in your Mini DisplayPort directly into a Thunderbolt port!

Thunderbolt provides a staggering 10 Gbps in both directions.  Here is a breakdown of performance across different I/O technologies taken from Apple's website:

The figures speak for themselves.But to give this a real-world example, High Definition video (I'm talking GB's of data here) can be transferred over Thunderbolt in a seconds. DisplayPort can power a 1080p resolution display and multiple audio channels too with ease. 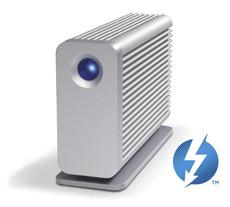 High performance? Without a doubt. With this much throughput Thunderbolt has the bandwidth to daisy-chain multiple high-speed devices. For example, you could potentially connect a couple of audio interfaces, several high performance hard disks and an Apple Cinema Display. No hub required -- one port/cable connected to your Mac, all other devices connected through each other and 10Gbps is not shared but through the same connector you can achieve 10Gbps in both directions!

It doesn't stop there as Thunderbolt will apparently provide 10 watts of power to connected peripherals for Bus power, which makes a MacBook Pro in the field a worthy substitute when capturing multiple streams of audio or video editing to a Desktop machine. Imagine the quality and the blistering multi-track recording performance on any Mac equipped with Thunderbolt connected to an Apogee Symphony for example? Mind-blowing.

So, You've got a Thunderbolt Port in your Mac... What Next?

It's plain to me, that Thunderbolt is the future I/O solution. However, we'll need a little patience as, to date, there are no Thunderbolt hard drives, audio interfaces or video capture devices available. This will change soon with companies like Lacie and Apogee both gearing up to provide Thunderbolt compatible Hard Disks and audio interfaces respectively. When a company like Apogee get excited about a new I/O standard, amongst many others audio people I take note.

Director of Marketing Sean McArthur at Apogee has this to say about Thunderbolt, "Intel's Thunderbolt technology on the Mac marks the end of difficult choices and the beginning of unlimited performance," he continues, "In the near future, Thunderbolt will take the confusion out of choosing a professional connectivity standard for audio production." McArthur continues, "Too often we have seen our customers frustrated by the options: Should I go with USB 3, FireWire 800, PCI cards and when is that LightPeak thing coming? Now we know, as manufacturers and customers, where we are headed."

The MacBook Pro has long promised portability and power for the Audio and Video crowd, which has often been compromised by processor power, connectivity bandwidth and battery life. Now, thanks to Intel's Quad-Core Sandy Bridge i7 portable processors, Thunderbolt and Apple's advancements in the field of long-life batteries, this promise is set to become reality. These are exciting times for digital musicians - what do you think?