I have a long history with Logic Pro. As many of you know, I was Apple's Lead Educator and Original Courseware Designer for Logic. In 2005 I created macProVideo.com, and Logic quickly became our biggest tutorial category. To this day, we're the world's largest Logic educator '¦ so when Logic Pro revs to a new version, there's nobody in the world that gets more excited than me.

In the four years since the last major rev of Logic, there's been a ton of hype and speculation about what's coming next. A couple of years ago (literally), I was hanging out with Bob H (the main man behind Logic at Apple). I asked him, "Bob, how will you revolutionize the music industry with the next version of Logic?"

Bob told me it was easy: Logic was simply a big button now - you push the button, and it makes the music you're thinking about.

All joking aside, many people feared Logic would be "Dumbed-down" into a "LogicBand / GarageBand Pro," or even worse, that it would go the way of Final Cut, and become a completely different program. Rumors abounded that the Environment would be removed. Steve H. parodied this sonic paranoia in an April Fools joke in 2011 '¦ and people believed us!

Fast-forward four years, and the new Logic Pro X (at $199.99) is upon us. And I'm pleased to report, it's the same Logic you know and love, but with a fantastic facelift and some brilliant new features. The best news of all is, it doesn't take long using the new Logic Pro X before you feel like you're still using the old Logic Pro 9. But you're making better music '¦

Upon first launching Logic Pro X, my impression was certainly 'Wow - this isn't the Logic I'm used too!' Following in the footsteps of Final Cut Pro, the interface is now much darker. The Transport and Display areas are moved to the top of the screen, and the toolbar buttons have been squared off to match the design of other Apple Pro Apps. 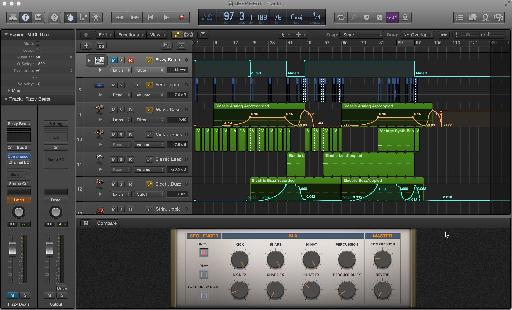 The new updated, darker GUI of Logic Pro X has that wow factor!

But once you dig under the hood a bit, you quickly realize (with a sigh of relief) that this is indeed the same Logic you know and love. The tracks and channel strips are all there. The Track Header and Region Parameters areas still work the way they used to! Automation lanes & curves function just like before ... and best of all, the Environment is still a central part of the software. Everything you've come to rely upon is still here :)

So what's new, then?!? Oh don't worry ... you still get to feel like a kid on Christmas morning - Logic Pro X has some amazing new features. Here's my top 5 new features, and why YOU will love them too.

It's something small, but as an educator, I think one of the best additions to Logic Pro X is the new Quick Help. Logic has always taken heat for having a lot of hidden features. By enabling Quick Help, you can now just mouse-over anything in the interface, and the Quick Help area will tell you what that button or area does. No more sulky trips to the manual, trying to figure out a feature you don't even know the name of - the answers you need are often right there in the top left corner of the workspace.

Thanks to Quick Help, there'll 'no more sulky trips to the manual, trying to figure out a feature you don't even know the name of.'

I'm addicted to sweeping cutoff. I can admit that. Hearing Olav Basoski's 'Getting Around' at The End in London (circa 1998) changed my life. Since that moment, pretty much all my music features big lowpass filter sweeps. Consequently, I need access to the cutoff knob on my synths and plug-ins at all times. In Logic 9, that meant constantly diving into plug-ins to make a tweak, closing that plug-in, and opening another. It was annoying, actually.

"Smart Controls let you set up custom controls that access all of a track's plug-in settings, in one convenient little bundle at the bottom of the screen."

Enter Smart Controls in Logic Pro X. One of my favorite new features, Smart Controls let you set up custom controls that access all of a track's plug-in settings, in one convenient little bundle at the bottom of the screen. Often, there's only a few plug-in parameters we really want to change - for example, Resonance and Cutoff on a synth, along with the Reverb Amount on a Space Designer plug-in ... oh, and a couple of frequency bands from the Channel EQ. You can assign these parameters from all 3 plug-ins to a few knobs on a single Smart Control. Voila! You never have to open your plug-ins again. The result is a cleaner workspace, and faster access to the creative controls you need to make music.

David Earl covers everything you need to know about Smart controls in the Logic Pro X 107 Course.

The New Drummer Track starts taking Logic in the direction of the April Fools joke I mentioned above. Essentially, a Drummer track is an AI version of a real drummer. It includes a 'Follow' feature that allows the Drummer track to 'listen' to a selected track, and improvise a drum groove that will fit the track. If that isn't science fiction meets Logic, I don't know what is ... But, this is all built on serious technology. It's powered by the new Drum Kit Designer plug-in, which features multi-sampled drums that Apple is very proud of - apparently thousands (yes that's thousands) of varied strikes are recorded for each drum and cymbal in the kits, leading to drum recordings that faithfully recreate the sound of real drums, being played by real drummers, in real studios. And Apple should be proud, because Drummer Tracks, with the new Drum Kit Designer plug-in, are a killer combo for those of us that don't have a set of real skins available.

Long the domain of the Environment window, MIDI FX have now come to a plug-in window near you. From functions like transposing, velocity processing, and chord triggering, to wildly creative MIDI FX like the Modulator, and Randomizer ... there's a bunch of pre-baked MIDI FX just waiting to inspire your creativity. 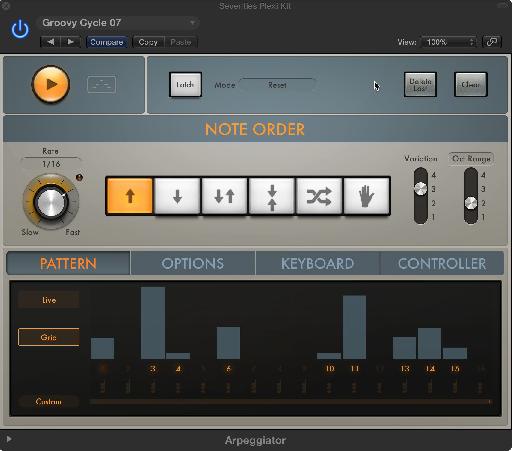 Arguably the best new MIDI FX Plug-in is the awesome new Arpeggiator. I always found the old Logic Environment Arpeggiator a bit lacking - but no longer. This new beast of a MIDI FX plug-in is an incredible tool for generating musical concepts. It's simple and intuitive to use, and comes with many presets to get your juices flowing. It's also got a step grid editor, which is the perfect tool for generating those big bass and lead synth lines you could never play yourself. For me, this plug-in alone makes Logic Pro X worth the price.

To experience the full power of the Arpeggiator, you need to see Steve H's new Logic Pro X 200 Course.

Every person with an iPad doesn't have Logic, but every person with Logic probably has an iPad. We're geeks, after all. And we use Macs ... and we love to lounge on the couch while we make music. Of course. So I guess it just makes sense that Logic Pro X comes with the new Logic Remote. 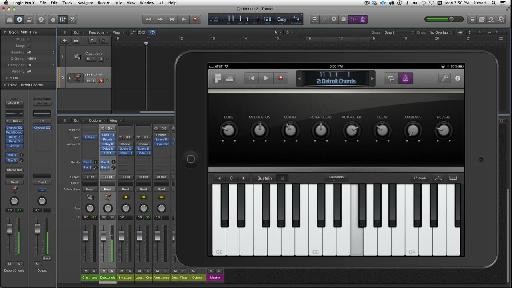 Controlling Logic Pro X from an iPad with no noticeable latency '¦ "It's pretty amazing!"

Seriously though, the Logic Remote is designed to provide you with mobility - take it across the room and play your synth, while controlling song playback and record functions on your iPad. Logic Remote also takes full advantage of the iPad's multi-touch display. And if you set up the remote to, for example, control a synth, you now have a cool new controller providing some innovative ways to create music. Of course, the multi-touch control really shines when you sit back into the sweet spot of your studio, using your iPad and the Logic Remote's Multi-Touch Mixer to mix multiple channels of audio at once. And in my tests, latency doesn't really seem to be a problem either. It's pretty amazing!

Steve H's will show you everything you need to know about the Logic Remote in these new Logic Pro X 106 training videos.

There's no doubt in my mind - Logic Pro X is the best version of Logic to date. Its 64-bit architecture provides massive plug-in power, there's many new features like Flex Pitch that are designed to enhance musical creativity, and if you're upgrading from Logic Pro 9, the upgrade path is simple and painless. This is the Logic we've been waiting for.

By keeping the software evolutionary, instead of revolutionary, Apple has made a surprisingly simple DAW that packs knockout audio power. If you're a Logic 9 user, you'll find the sweet new features & plug-ins are like aural candy, spawning creativity you've only dreamed of. And if you're new to Logic, don't hesitate to dive in - this version of Logic is the easiest to use (and learn) yet. It's a great piece of software that's grown through the years to become the pinnacle of what an audio DAW can be, and I'm proud to have been a part of that story ...

Martin Sitter
Martin Sitter is the Founder of NonLinear Educating Inc., and the CEO of macProVideo.com, AskVideo.com, and Ask.Audio. Martin started out as a DJ and Record Producer in the 90s. At the turn of this Century, Martin was recruited by Apple Computers to design and author their Official Software Training Curriculum for Logic, Soundtrack Pro, and DVD Studio Pro. Martin wrote the Original Apple Pro Training series books for the above topics. He's also a best-selling technical author of over a dozen books, spanning various topics in audio and video editing & design.
Related Videos
Comments (10)