Home music production really took off with the introduction of Apple's GarageBand, included with all new Macs. The massive collection of Apple Loops and software instruments included with the program, as well as the huge variety of third-party content available, make it easy for even beginner users to produce professional-sounding songs.

Inevitably though, the time will come when you'll want to add your own vocals to a song you've created in GarageBand. Or perhaps you want to record a podcast or some other non-musical material. So, in this tutorial, we'll show you the basics of recording vocals into GarageBand '11.

Before you can begin recording your vocal track, you'll need something to record your voice with and a way to hear what you're doing. Now, you could record your voice through your Mac's built-in microphone and in some cases, like recording a podcast or a simple video voiceover, you could get useable results. However, for recording vocals for a song, unless you're going to be heavily processing the voice track or are looking for an intentionally raw sound, you'll want to use a reasonably professional vocal microphone.

There are a million different mics available that are appropriate for vocals, and we aren't going to recommend any specific ones here. But if you're looking to get a vocal sound that compares with professional recordings, one of the standard types of mics used in the recording industry is what's called a large-diaphragm condenser (LDC) microphone. There are many of these available too, with prices that can run into the thousands of dollars for a top-of-the-line model. But for home recording purposes, you can do well for under two hundred dollars.

The advantage of an LDC mic is that they're more sensitive than the standard dynamic mics you're more likely to see on a live stage, and they tend to "warm up" a recorded voice, which is why they're favored for studio recording. Condenser mics do require an external power source, referred to as phantom power, so if you go for a standalone condenser mic, you'll need to be sure that your audio interface supplies phantom power.

However, there's a more recent development in the world of home recording that you should investigate also: the availability of a variety of USB-powered large diaphragm condensers. These are especially useful for beginner home recordists, because they combine an LDC and an audio interface in one device. Many of them even provide a headphone jack for monitoring. A USB LDC connects directly to the USB port on your Mac; the USB port supplies the phantom power for the condenser. In addition, the USB mic is its own audio interface, so you don't need to purchase a separate interface to plug the mic into. And, as mentioned, most USB mics also have a headphone output that you can use to monitor your GarageBand inputs and outputs.

This is important because if you listen (on external speakers) while you're recording your vocals, the mic will either feedback into itself, or you'll pick up your instrumental tracks through the mic along with your voice, and you won't be able to mix the final results properly.

By the same token, you'll ideally want to use closed-ear headphones rather than earbuds for monitoring; closed-ear phones generally sound better than earbuds, and also provide more insulation against audio leakage into your mic while recording. And because LDC mics tend to be more sensitive to picking up Ps and other popping sounds, a pop filter is also a good investment. Pop filters are small screens that you mount in front of the microphone to reduce the force of those "P" vocal sounds (called plosives) without affecting the basic tone quality of the voice.

OK, assuming you have all your vocal recording gear set up and that you already have an instrumental track in your GarageBand project to record over, you'll need to create a new track to record into. Choose Track > New Track... (Command-Option-N), then click Real Instrument. Under 'My instrument is connected with', choose your mic input (if you're using a USB mic, it will probably appear as USB Audio CODEC rather than the actual name of the mic). Under that, choose your input channel (which for a USB mic will probably default to Mono 1). Under 'I hear sound from', choose your monitoring output (again, choose USB Audio CODEC if you want to monitor through the mic's headphone output. Otherwise choose your available output device). Finally, click the 'I want to hear my instrument as I play and record' checkbox to hear your voice through your monitoring device as you sing: 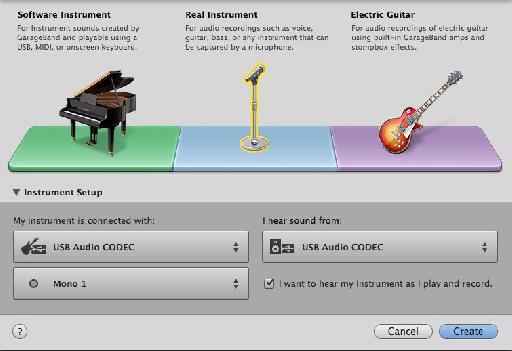 When you create the new track, the Track Info Pane will automatically open to the right of your tracks. You've already set your input source, so don't worry about that. But you do want to set your monitor source in the Monitor pop-up menu: choose 'Off' to disable monitoring, choose 'On' to monitor your mic and the instrumental track through speakers, or choose 'On (no feedback protection)', which is specifically designed for headphone monitoring, which is what we want here:

Next, sing or speak into your mic and look up in the track name area at the record level meters for your new track (it's located above the slider). Note that this slider doesn't affect the input level, just the playback level. For a USB mic, the recording level is probably set on the mic itself; otherwise you set it in the Track Info area where we just set the Monitor source.

So, while singing or speaking, adjust your recording level so the meters read, on average, in the upper end of the green area. It's OK if the meters go into the amber range occasionally, but don't hit the red marks at the ends of the meters otherwise you'll get distortion in your track.

Step 4 - Set Effects for the Track

At this point, you can just start recording your vocals, but many people like to hear what vocal effects will sound like on the track as they record it, so they can respond to the effect while singing. This is strictly a matter of taste but for now, let's apply effects while recording.

So, with the track selected, click on Vocals in the right side of the Browse tab in the Track Info Pane, then choose different vocal effects settings while singing and listening to the results. Again, this is a matter of taste and you can always change the effects setting after recording. For now, choose Pop Vocals from the list: 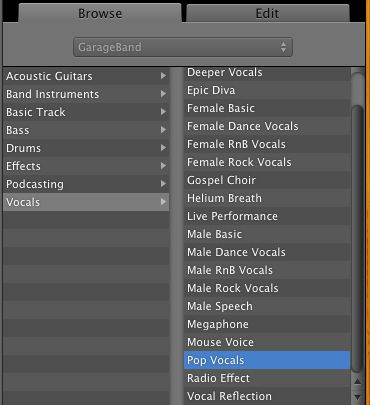 Alright, let's record: with your new track selected, drag the playhead to the location in the track where you want to start recording (or click the 'Go to the beginning of the song' button in the Transport), then click the Record button to begin recording. You'll hear your instrumental track playing back (adjust its playback level with the Set the track volume slider if necessary) and as you sing, you'll see your vocal track appear in red in track window. When you're done recording, hit the Spacebar to stop, after which your track will appear in purple:

Rewind back to the beginning and hit Spacebar again to hear your recording, adjusting the relative track volumes as needed. If you don't like what you just recorded, simply undo to remove the recording and record again.

And those are the basics. From here you can, for example, try applying different vocal effects to your vocal track by just choosing them from the browser, or you can add another vocal track by recording into a new track.

Did you know there are plenty more tricks on recording audio in GarageBand? Learn more in Garageband'11 101.