All Articles Final Cut
Replace Editing in Final Cut Pro X
David Smith on Tue, January 3rd 1 comments
Language
David Smith reveals how Replace editing works in FCP X and how it can be used to exchange a clip in the Timeline with one from the Event Browser.

Replace Edits have been a key part of Final Cuts workflow for every user. In Final Cut Pro X Apple have made replace edits just that little bit easier. If you haven't ever tried to use Replace Edits in your edit workflow, to put it simply there is a way to exchange a clip in the timeline with another clip from the Event Browser. If you are currently using Overwrite edits to do this, then this article will show you how replace edits don't require accurate range setting and playhead placement to successfully swap clips over accurately, saving you time and effort.

Step 1 - Select a clip in the Timeline

Scrub through the timeline until you find a shot you need to swap for another angle, take, or perhaps clip.

It's important to know how long a clip is before you replace it, as trying to replace a 6 second long clip with a shorter clip, say a 4 second clip will change the duration of the sequence, which you may not want to have happen. 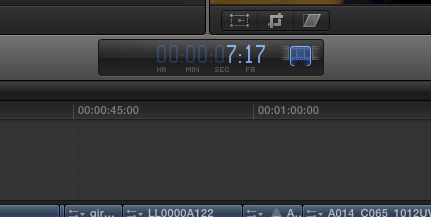 Press Control-D to open the clips duration field in the Dashboard to see its length. 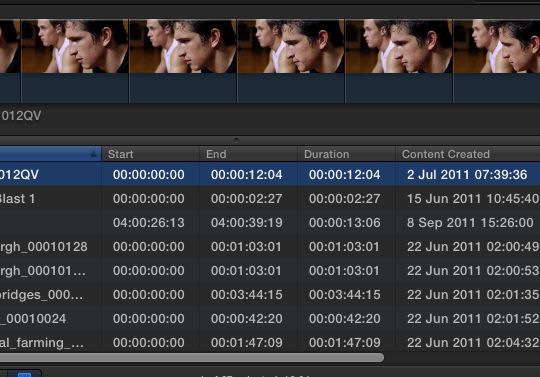 Check the duration is longer, so as to enable you to follow this article.

Skim through the clip and set a range start point by pressing I or using the range selector. Use the end of the clip as the end point. 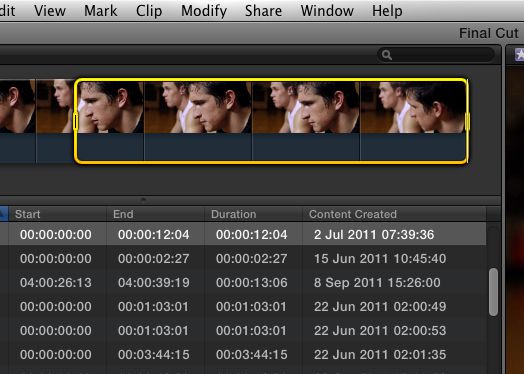 This should still be a longer clip than the one in the Timeline.

Drag the selected range from the Event Browser down to the timeline, placed over the original edited clip. The clip should turn white when you lay it directly over. 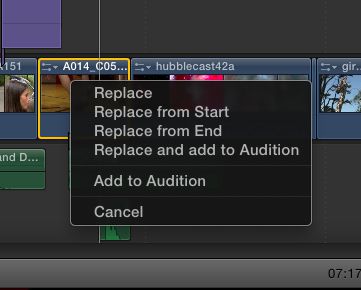 A pop-up window appears asking what type of replace edit you intend to use. Start by choosing Replace.

Press Command-Z to undo that last edit and try another method. 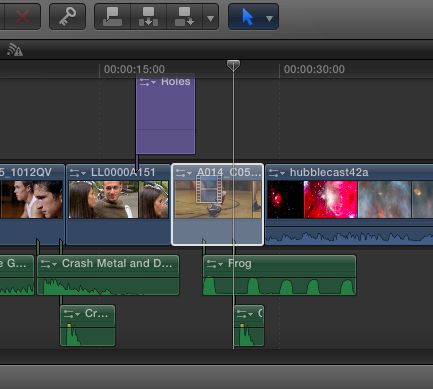 Drag the selected clip range from the Event Browser once again, only this time from the Replace menu choose Replace From Start.

The clip is replaced again, only this time the end point of the clips range is trimmed so that it fits the duration of the original clip. The timeline no longer has to extend in order to fit the replaced clip. This is great if the length of your edited project has to remain the same, however you don't really have control of the end point of the shot.

Press Command-Z to undo that last edit and try another method.

Drag the selected clip range from the Event Browser once again, only this time from the Replace menu choose Replace From End.

The clip is replaced, just as with the Replace with Start, however this time it's the end point of the clip range that is placed at the out point of the edit, and the start point is trimmed. This is a better option for when the end of a clip is of more value than the start.

Another option is to use Auditions when you replace edit, for which there is another article written by me in the MacProVideo HUB archives, blow the dust off and have a look at that why don't you.

Dream It. Do It.
Do you want to learn Editing In The Magnetic Timeline?
Yes, I want to learn!
No Thanks, I just want to read the article.
Feedback
How are we doing?
We'd love your thoughts, feedback and questions regarding our new site. All feedback is appreciated!
We do not respond to this form! If you need support, please visit our support page.
Thank you for your input!
Your message has been successfully sent
Course Advisor
Don't Know Where To Start?
Ask A Course Advisor