“When Antelope released the original Zen Studio, the company redefined what was possible with a portable interface in terms of both audio quality and I/O count,” says Igor Levin, C.E.O. of Antelope Audio. “Zen Studio+ takes things into a new realm by adding Thunderbolt™ and incorporating Antelope's amazing FPGA hardware effects modeling. These things make Zen Studio+ the ultimate next-generation tool for recording anywhere the sound carries you. We are pleased to debut this exciting new product at Pro Light + Sound Guangzhou this month.”

The Quest for Zen

Zen Studio+ is the ultimate portable workstation for engineers and musicians who need access to all the tools of the studio on the go — with a full array of supercharged FPGA-based FX. The hardware includes valuable features like a pair each of dedicated re-amp outputs, headphone outputs, and mastering quality monitor outputs. With its 12 preamps, including hi-Z and line inputs, and an additional eight inputs and outputs on DB25, the unit is further extensible via ADAT or S/PDIF. Therefore Zen Studio+ is well equipped for multi-mic recording setups anywhere at any time, allowing set up of extra room mics to capture pristine sounds in just about any environment.

A deeply customizable routing matrix helps establish exactly the right signal flow for the way that you work and makes incorporating outboard hardware and FPGA FX rudimentary. A built in talkback capability enables full control room capability at home or in the studio.

Antelope Audio continues to expand its hardware downloads, and now boasts a library of over 30 unique effects — each carefully modeled from the most coveted pieces of studio gear in recording history.

Zen on the Clock

Zen Studio+ delivers incredible fidelity and imaging thanks to its beating heart: Antelope Audio’s industry-defining 64-bit Acoustically Focused Clocking. Better clocking means better analog to digital conversion and authentic sonic imaging, ensuring that every detail of your signal chain is captured with integrity. It also allows pristine digital to analog conversion between your DAW and your speakers or headphones, enabling you to hear greater detail and make better mix decisions. Word Clock input and output enable Zen Studio+ to seamlessly integrate with the rest of your studio gear, and an Atomic input is available for upgrading to Antelope’s state-of-the-art 10MX atomic clocks for the best clocking in the industry. 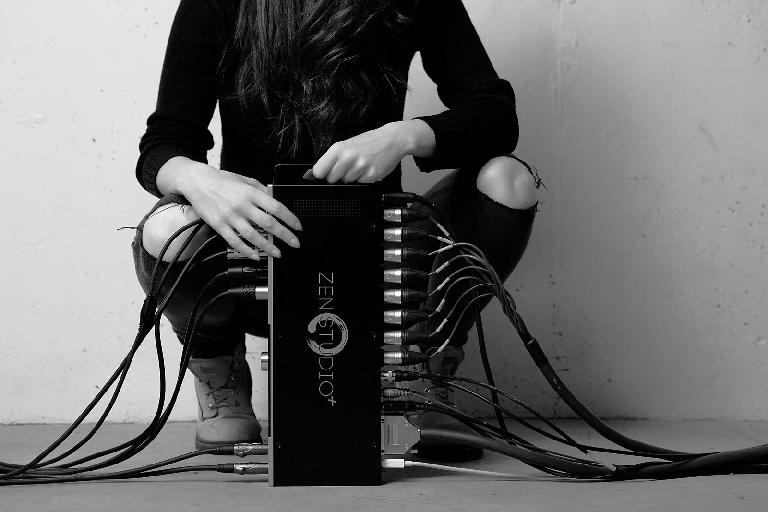 Zen Studio+ is controlled via a powerful desktop app for OS X or Windows, allowing access to a fully customizable signal routing matrix and up to four independent mixes for monitoring, as well as full control of Zen’s real-time FPGA effects. Front panel controllable talkback is built in to Zen Studio+ hardware, but gains added flexibility via Antelope Audio’s handy iOS and Android app, which gives users the the option to talk back via their phone’s microphone.