All Articles News
Arturia iSEM Synth Brings Analogue Warmth to iPad
Rounik Sethi on Wed, October 9th 0 comments
Language
If iSEM by Arturia sounds as good as it looks then this is one app every synth-loving iPad wielding musician should check out. Featuring full iOS 7 & inter-app audio it looks promising.

Music software and hardware company Arturia is proud to announce availability of iSEM, its second supreme subtractive synthesizer recreation for Apple's all-conquering iPad, as of October 9...

Like Arturia's award-winning Oberheim SEM V desktop (or laptop) software solution before it, iSEM uses proprietary TAEÂ® (True Analog Emulation) technology to faithfully reproduce the analogue warmth and ingenious interface of the vintage Oberheim Synthesizer Expander ModuleÂ® (SEM) to which it also owes its inspiration and name, but brings it all kicking and screaming to this day and age in the most musical and ingeniously interactive ways possible by making the most of the latest developments available to its iPad host. Helpfully, Arturia has seen fit to take advantage of iOS 7's inbuilt Inter-App Audio, allowing iSEM users to send MIDI commands and stream audio between apps on the same device. And that's just for starters!

But first, a little history: hatched by legendary synth designer Tom Oberheim back in 1974, the dual-oscillator SEM was originally conceived as a way of beefing up weaker-sounding compatible analogue monosynths of the time before becoming a sought-after sound in its own right '" so much so that its American creator came up with a series of successive SEM-based instruments, first pairing up two SEMs with a 37-note keyboard and a simple analogue step sequencer to form the Two Voice, Oberheim's first self-contained compact, duophonic synthesizer in 1975, thereby beating rivals to the polyphonic punch. Programmability came courtesy of Oberheim's breakthrough Polyphonic Synthesizer Programmer which '" when hardwired into the fair-sized Four Voice (featuring four SEMs and a 49-note keyboard) in 1976 and enormous Eight Voice (eight SEMs set across two tiers) in 1977 '" enabled the control voltages of many parameters for up to eight SEMs to be memorised for the first time. Though these instruments were undeniably groundbreaking, quickly finding favour with the likes of popular prog-rockers Rush and electronic music trailblazers Tangerine Dream, polyphony was, after all, achieved with multiple SEMs so each voice/module had to be programmed independently, which was quite a daunting task '" even by somewhat shaky Seventies standards!

Fast forward, then, to 2013 and the truly 21st Century musical landscape has changed considerably, as has music technology itself. Today, of course, we take polyphony and programmability for granted, though not necessarily that still-sought-after Oberheim sound. Ingeniously, iSEM quite literally taps into all of this and then some, putting more musicality at anyone's fingertips than its analogue namesake designer dared dream possible back in Oberheim's Seventies salad days!

On the surface, anyone in any way familiar with the original Oberheim Synthesizer Expander ModuleÂ® will immediately feel right at home when launching iSEM since the majority of its MAIN screen graphically mirrors the VCO 1, VCO 2, VCF, ENV 1, ENV 2, and LFO 1 layout and all associated controls to a tee '" right down to the old Oberheim logo within the VCF section! Speaking of recognition, recreating that still- sought-after Oberheim sound is a challenge that iSEM readily rises to meet from deeper within thanks to that TAEÂ® technology. This allows accurate modelling of analogue circuitry behaviour '" in this case, an original Oberheim Synthesizer Expander ModuleÂ®. Meaty, Seventies- sounding sounds stream forth from iSEM with over 600 highly-usable presets always accessible from its eye-catching browser '" a quantum leap forward from Oberheim's Polyphonic Synthesizer Programmer of way back when, surely?

Of course, communicating with the outside world in the pre-MIDI age was always a testing time back in the Oberheim SEM-launching Seventies. Not so today with iSEM... simply tap CONNECT and the iPad world is your musical oyster, thanks to Core MIDI, WISTTM, and Audiobus support '" not forgetting the aforementioned Inter-App Audio.

But that's not all iSEM has to offer. Far from it, in fact! Pressing the VOICE PROG button brings into play a voice programmer that makes simulating a huge polyphonic sound similar to Oberheim's original Eight Voice hardware heavyweight a breeze '" albeit without having to wrestle with eight monosynth modules hardwired together to create complex tones. Tellingly, MOD MATRIX makes creating complex modulation routings equally easy while the FX page brings built-in chorus, delay, and overdrive effects into the musical mix. Meanwhile, multiple performance parameters are accessible from the PERF page boasting ARPEGGIATOR controls, assignable sliders, and effects mix controls. 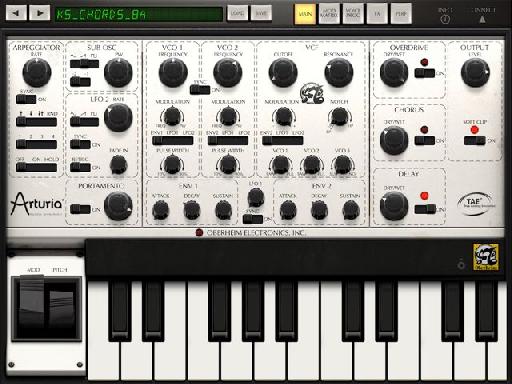 Amazingly, all of this is available in iSEM as an ear-opening iPad app for a tiny fraction of what its notable namesake analogue ancestor cost almost 40 years ago. The times they are a-changin' here for sure! And admit it. Will you miss having to haul heavyweight hardware around? That's progress. Portability pluses apart, iSEM is a supreme software recreation of a supreme subtractive synthesizer, pure and simple. So surely Apple's App Store should be your next port of call? Get iSEM today and get back to the future of that still-sought-after Oberheim sound with Arturia!