All Articles News
Arturia Marks 15th Anniversary Summer Savings
Rounik Sethi on Mon, August 18th 0 comments
Language
In recognition of popular music software and hardware company, Arturia, turning 15 this year there's some treats in their store of you to grab. Get a 50% discount on 15 of their software instruments!

GRENOBLE, FRANCE: music software and hardware company Arturia is proud to mark its 15th anniversary milestone with an all-new contemporary company logo and amazing summer savings for all with 50% off 15 software instruments '" including its innovative iMini and iSEM iPad apps '" between July 31 and September 8, inclusive...

Coming from a country that was historically hooked on guillotining its heads of state, 15 years is a long time in the cutthroat world of musical instruments and software let alone always endeavouring to remain on its cutting edge. So who better, then, to pop the proverbial champagne cork to start the '˜revolutionary' celebrations than Arturia President FrÃ©dÃ©ric Brun. As an imaginative individual who co-founded the company back in 1999, he has valiantly led the charge to keep those cutting-edge musical instruments and software flowing forth '" first from Grenoble, and additionally West Lake Village, California '" all the way to this joyous occasion. 'What a journey it has been since we started Arturia as students and decided to take the best that technology has to offer and bring it to musicians,' Brun begins, before adding: 'And what a pleasure to celebrate our 15th anniversary this year! From the time we created Storm '" a virtual studio aimed at making music creation easy and affordable '" to recent hardware and hybrid hardware/software releases such as MicroBrute and BeatStep '" both representing truly innovative gear for the contemporary musician '" inventing new musical instruments, inspiring to everyone and accessible to many, has always been our raison d'Ãªtre. This summer we are delighted to announce a promotion that may well introduce our software to new musicians. Or it may just allow seasoned producers to complete their collection just because... well, just because it is our bon plaisir!' 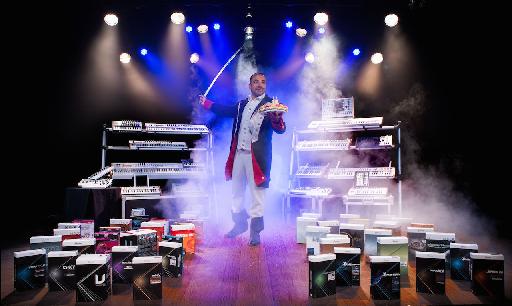 We don't need to tell you what'll happen if you don't grab one of the discounted Arturia instruments before Sepember 8th...

But before jumping for joy at this '˜guillotined' pricing par excellence, let us collectively cast our minds back over some of this cutting-edge company's milestones during its illustrious history: having kicked up a software storm with Storm, its inaugural release in 1999, Arturia proceeded to break new ground with Moog Modular V, the first recreation of a classic analogue synthesizer in March 2003. BRASS, its first instrument based on physical modelling arrived two years later. Analog Factory Experience represented Arturia's first software/hardware hybrid instrument in 2007, while Origin, its first hardware synthesizer (housing several synth classics and associated components in one powerful, no-holds-barred DSP-based modular system), debuted in January 2009. The hybrid hardware/software SPARK Creative Drum Machine (cleverly combining analogue synthesis, physical modelling, and samples with the intuitive workflow of a hardware drum machine) followed in June 2011. May 2012 saw Arturia turning industry heads when introducing the cost-conscious MiniBrute, an amazingly compact and bijou analogue monosynth (boasting MIDI, USB, and CV connectivity together with a host of unique features). Arturia has since broadened its appeal further still by successfully entering the iOS soft synth market and building upon its analogue synth and hybrid hardware/software successes with an ever-increasing product release schedule in keeping with its sustained growth '" 35 employees and counting.

Speaking of which, given that turnover has risen by 470% during the last four years with a 55% increase in the last fiscal year alone, Arturia assuredly has much to sing and dance about. And what better way to do that than by making some serious celebratory noise with some seriously discounted software instruments! Vive la France '" with more than a little help from our Californian colleagues, obviously. Or maybe we would be better off by simply saying: SantÃ©! Join us as we raise a glass together to toast our past, present, and future. Here's to the next 15 years!