All Articles Guitar
Compression Techniques for Acoustic Guitar
Rich Tozzoli on Sat, December 14th 0 comments
Language
Don't let acoustic guitars torment you in the mixing stage! They can be tough to tame, but fortunately we have Rich Tozzoli here to guide us through using compression to stay in control.

When it comes to record production, the acoustic guitar can be a tough beast to tame. Not only are there endless models with a huge variety of tones, but also they can be hard to properly capture. But once you've got it recorded, how can you make it cut through the mix? Let's look at some uses of compression to help out.

The use of compression with acoustic guitars depends on what you're going for in the mix. I've found that with the more open, singer/songwriter types of songs, you shouldn't compress much, if at all. Remember, compression reduces the dynamic range of an instrument, in effect '˜evening out' any peaks or transients. If the acoustic is a featured instrument, even just under a voice, it needs to breathe and keep much of its dynamics. So you will want to retain those transients, and not squash them '" especially if you have vocal bleeding into the acoustic mic.

Just a Dab Will do

So when trying to get a featured acoustic part to sit in a mix, I will use something like a 3:1 or 4:1 ratio and set the threshold so that it barely hits the compressor. Most compressors, such as this common Waves Renaissance plug-in, have a meter showing how much compression and/or gain reduction is happening (shown in orange). 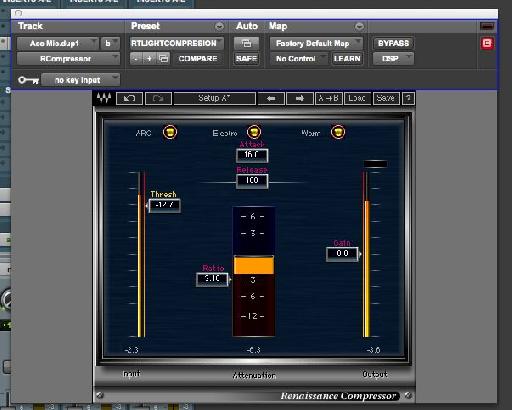 '¨When setting the threshold and viewing the gain reduction, use your ears. If you pull the threshold down and see the meter hitting harder (or more), you'll begin to hear the peaks of the acoustic reducing '" a kind of '˜squashing' sound. As you lighten up on the threshold, the guitar will retain more of its natural dynamics. At this point, you can add a bit of Gain to the compressor, which not only makes up for any reduction from the compression, but of course, makes it louder.

Compressing an acoustic guitar in a dense or full mix may be a bit different. When this is the case, it has to compete with a lot of other instruments to punch through. Often, I will turn to a different, more aggressive style of compression, such as the 1176-style compressor.

In this case, I'll punch up something like a 2:1 compression ratio, with a slower attack and faster release, setting the Input (which is like a threshold on most compressors) so you see the needle hitting hard with the acoustic transients. Like the example above, you'll hear it happening, but it will sound more squashed. Then you set the Output to whatever level sounds best. Output has no effect on compression with an 1176, it simply sets the already processed master output level of the plug-in.'¨'¨This type of compressor hits instruments in a different way, and you'll need to play with the Input, Output, Attack and Release to find what best fits your song.

With careful tweaking, you can get that acoustic guitar to cut through any mix. Simply use your ears and try out different styles of compressors with various settings. Again, the softer compression seems to work best when you need the acoustic to be a featured instrument, and more aggressive compression tends to work when it's packed into a full mix.