All Articles Recording & Production
Do You Really Need The Sound Guy?
G.W. Childs IV on Sat, May 11th 0 comments
Language
Playing live soon? G. W. Childs pipes in with some timeless advice on how to make sure everything goes smoothly with your sound guy and to help you play an excellent set.

The earliest and best advice I ever received as an aspiring stage musician was, “Always be cool to the sound guy.” Of course, I’m referring to the ‘in house’ sound guys that will always be on call at any venue you will ever play at, regardless of size, location, etc.

This is sage wisdom, especially for the age in which I began. This was during the early 90s and computers really hadn’t come in to their own yet. They were still doing Lotus Notes, and Doom.

I did break that advice once, and to my dismay, I played a performance that was, quite literally, the worst show of my life. Halloween night in a venue of over 1500 people, known as ‘the Groove’, in Hawaii. The stage was extremely wide, and I had just managed to smart off to a sound guy that was already looking like the ‘party had started’.

In response to my rudeness, the party boy sound guy panned my sampler (which was responsible for my drums) all the way to the left. This meant that one side of the venue thought my act was playing industrial, the other side thought we were doing ambient. To top it off, the drummer that I worked with that night thought it would be cool to wear a Darth Vader helmet on stage, as it was Halloween. Did you know that an uninsulated Darth Vader helmet is highly reflective on the interior? Needless to say, his timing was... a little off.

Learn From Your Mistakes On Stage

With every terrible show you have, if you’re smart, you’ll always take away the lesson learned from the bad show. Don’t even look at it as a bad show, look at it as a pure, golden nugget of wisdom that will turn you in to a bad ass stage musician. What I learned from the Vader, Hawaii debacle was that I never wanted the sound guy, whether he liked me or not, to have that kind of power over me again.

Power, what do I mean? I meant that as soon as you show you at the venue, the sound guy, or guys, depending on the size of the venue will begin walking you through getting your gear set up on stage, helping you get a good mix on stage, and when the moment comes for you to perform... they have to perform too. And, believe it or not, their jobs can get as complicated as yours can get. For example: Adding several people to a room does change the sound of the room and as rooms heat up, equipment can heat up, reflective surfaces can become more problematic because one person is standing in one location. This, literally, is the time when magic, be it white, or black, will visit you... And the sound guy.

Now, depending on the sound guy that you’re working with, one of three things could start happening:

How to Avoid Problematic Experiences with Sound Guys

Not long after the event in Hawaii, I began restructuring my live equipment on stage, and even my band. I went from having a 5 man live band, to a 3 man live band. I don’t suggest this for everyone, but it made sense for me. Guitars weren’t playing a major role, and was more often that not, low in the mix. Acoustic drums were replaced with MIDI drums.

The actual major changes came with evaluating what really needed its own channel, and what didn’t. As you can imagine, with changes in technology, this has changed several times for me. Rather than go through a history, let me tell you about my current rig.

It may look like a lot on paper, but if you see it live... Here. 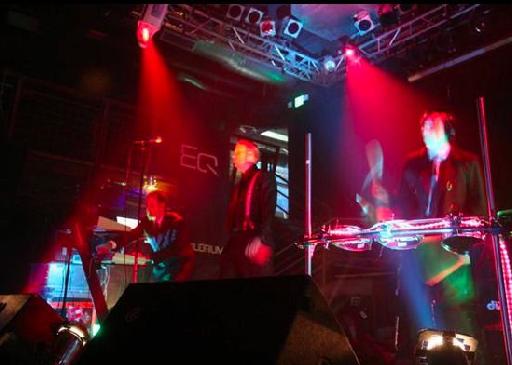 It looks small on stage. But, it does fill the stage up, and it’s not just one guy with a keyboard and a singer. There’s movement on stage too. And, don’t get me wrong, use whatever instruments. My philosophy here is: Less is more.

In this configuration, here are my actual outputs:

The key here is that all the vocals for my mic and the lead vocalists mic are being processed in realtime within Ableton Live. The beauty of this is that all effects changes can be programmed in the Live Arrangement view. This is actually trivial to program, but is quite profound when you hear the vocalist rapidly switch through different effects, seamlessly.

Drums are being triggered via MIDI, so there is no need to have a separate output. Though, I do use the Sends and Returns in Ableton to send a click track to the drummer, and myself for when I play piano parts. The return outputs are set to individual outputs on my MOTU traveler.

The easiest way to achieve a click track is to record a Metronome as a clip, disable its output, and then send it only through the returns that you’ve set up for each musician. 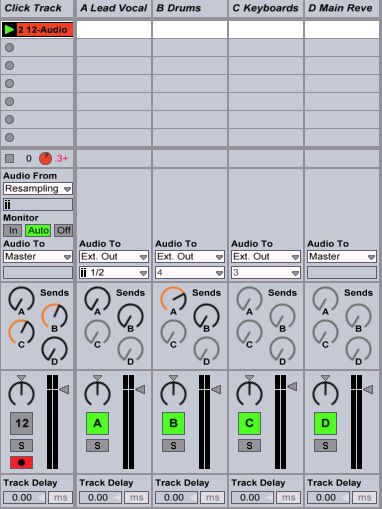 Drawbacks and the Ultimate Question

This is an efficient system for me, but that’s because I’m comfortable with it, and it matches my way of working. It may not be right for you. In fact, you may want to use another DAW altogether, or you may just be an acoustic band.

One way to avoid a bad sound guy, if you’re an acoustic band, or just hate computers?

Get yourself another band member that is a dedicated sound guy of your own. Give him an equal split, and have him at every band practice with you. Yes, he’ll need a dedicated mixing board. When the time comes for live performances, have him send a stereo out to the sound guy.

If you’re an acoustic, or rock band that loves computers?

Of course, this is very streamlined possibility. And, you’ll really need to flesh this out, and definitely practice with it a ton before you use it. But, with some work, you may come up with a system that sounds good, and avoids any mishaps with a sound guy.