Like its Dark Energy II predecessor, released to widespread critical acclaim back in 2012, Dark Energy III is a desktop monophonic analogue standalone synthesizer with wide-reaching CV/Gate, MIDI, and USB connectivity. Continuing that intriguingly-named lineage, likewise, Dark Energy III’s sound generation and all modulation sources are 100% analogue, with only its inbuilt MIDI/USB components entering the digital arena (as is obviously necessary, naturally). Needless to say, everything is built into a rugged black metal case with wooden side plates, while high-quality potentiometers with metal shafts are used; ultimately, each potentiometer is mounted firmly to the chassis, so no wobbly shafts and knobs — unlike some cheaply-constructed competing (non-Doepfer) designs. Dark Energy III is, indeed, essentially an enhanced version of Doepfer’s desktop standalone synthesizer so central to the company’s product line for so long, but boasts several notable differences. 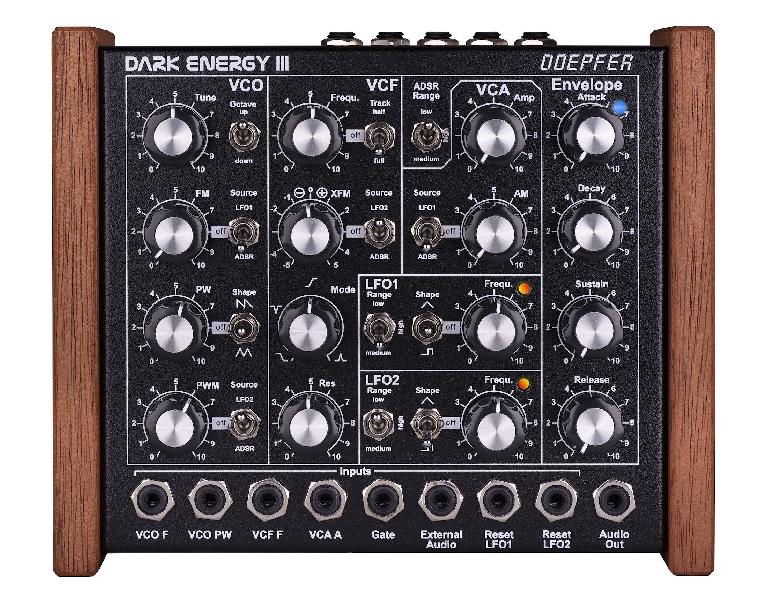 Notably — not least audibly, although also apparent from the front panel’s waveform Shape switch labelling, a triangle Shape waveform is now central to the VCO (Voltage-Controlled Oscillator) core, which now no longer requires a warmup period for optimal operation over a 10-octave frequency range (with 1V/Oct tracking over at least eight octaves).

On top of that, there are now separate Reset LFO1 and Reset LFO 2 Inputs for the two resettable LFOs (Low Frequency Oscillators). These sockets synchronise both LFOs to external gate signals, so when a gate signal of +5V (or higher) is applied at a socket then its positive ramp sets the corresponding LFO wave shape to zero and the LFO restarts with a rising ramp.

All analogue synthesizers use a VCA (Voltage-Controlled Amplifier) to dynamically control loudness (or volume); Doepfer’s Dark Energy III design differs from its predecessor — and also many other analogue synthesizers — by virtue of its VCA having a linear control scale, so lends itself to scaling control voltages. 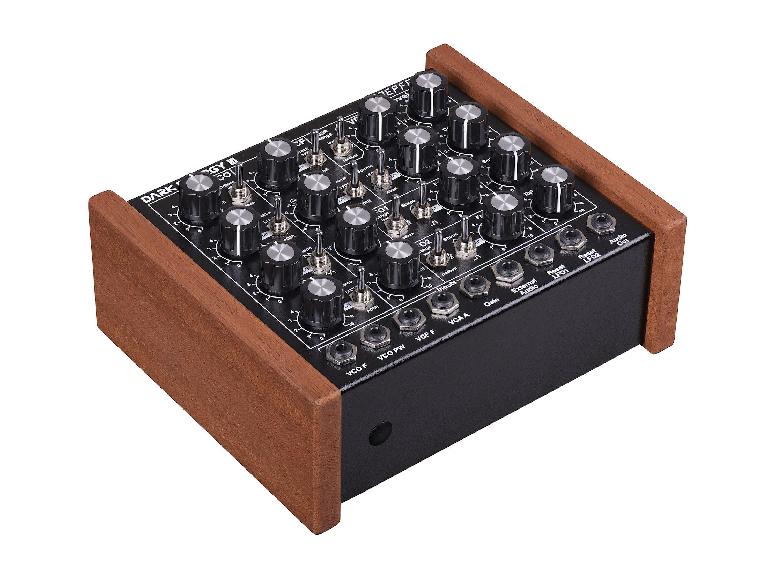 Several signal routings and functions are additionally available to any adventurous ‘Doepfer DIY’er’ willing and able to modify Dark Energy III’s front panel sockets by removing jumpers and rewiring the pin-headers for the VCO PW, Reset LFO1, Reset LFO2, and VCA Inputs. For example, the VCO PW input can be converted into a linear FM input, or LFO/ADSR signals can be used as outputs instead of one of the resettable LFO inputs. Indeed, (almost) anything is possible, including various VCO outputs (triangle, sawtooth, rectangle); VCO hard sync input; VCO soft sync input; various VCF outputs (lowpass, highpass, bandpass); various LFO outputs (triangle, rectangle); ADSR output; and two inverters with input/output (to invert any signal, such as ADSR or LFO).

Effective enhancements notwithstanding, the favoured filter found in Dark Energy II remains unchanged in Dark Energy III. Indeed, its sound-defining VCF (Voltage-Controlled Filter) is centred around a 12dB multimode filter with lowpass, notch, highpass, and bandpass settings, together with a filter Mode control for continuous transition from lowpass via notch and highpass around to bandpass; its XFM (Exponential Frequency Modulation) control also has a polarization function, whereby the modulation source (LFO2 or ADSR) selected by the Source switch can affect the filter frequency with a positive or negative behaviour (by rotating rightwards or leftwards, respectively).

Put it this way: with Dark Energy III, Doepfer delivers another effective enhancement of a highly-capable monophonic analogue standalone synthesizer, continuing to make its musical mark with a compact desktop design dating back to 2010 (when wowing audiences around the world with its original Dark Energy entry).

Ending on a high note, who better to tender tasty food for thought, then, than Doepfer Musikelektronik CEO Dieter Doepfer, the esteemed electronic musical devices designer who lends his notable name to the renowned company and has been known to look beyond our world for inspiration: “Dark Energy III is not a tool for space research, neither is it suitable for studies in astrophysics. Yet, we find these topics as fascinating as music technology — reason enough to celebrate ‘Hubble & Co.’s amazing discoveries a bit and call our brand-new synthesizer Dark Energy III.”

In Germany, Dark Energy III can be ordered online from Doepfer Musikelektronic GmbH (http://www.doepfer.de/form_e.htm) or via one of its German dealers (https://docs.doepfer.eu/en/dealer-germany/) for €479.00 EUR. (An optional user-installable Glide control kit — containing a prewired potentiometer with two nuts and a Dark Energy-style rotary knob — is available for €10.00 EUR.)

Outside Germany, Dark Energy III can only be ordered from Doepfer dealers in territories listed here: https://docs.doepfer.eu/en/ (That said, residents in countries without representation can order directly from Doepfer Musikelektronic GmbH.)