As implied by the 12 TRACK MATRIX SEQUENCER ‘subtitle’ boldly blazoned across its expansive top panel — pressed into play by the 12-line (and 16- column) arrangement of (red) backlit LED (Light Emitting Diode) buttons that musically mark out the namesake matrix laying claim to the majority of that top panel, the SEQ12 ANALOG AND MIDI SEQUENCER is a 12-track affair, with each track arranged numerically below the next in the matrix. More meaningfully, each track can freely address one of three MIDI outputs (OUT 1, OUT 2, and OUT 3) to ensure optimal timing (by avoiding serial chaining of connected MIDI devices) and additionally be assigned to one of three track types: MONO (monophonic) — plays only one note per step (sending note, velocity, and note length) and offers three controller tracks (C1, C2, C3); POLY (Polyphonic) — plays back multiple notes per step (sending note, velocity, note length, and chord) and offers two controller tracks (C1, C2); and DRUM — optimised to address drum machines (or similar) with the matrix forming a pattern where each line can be set to transmit a definable note to 12 so-called subtracks (with adjustable velocity and accented notes) from within a single track with two controller tracks (C1, C2)... 12 different drum sounds can be arranged from a single track, in other words. 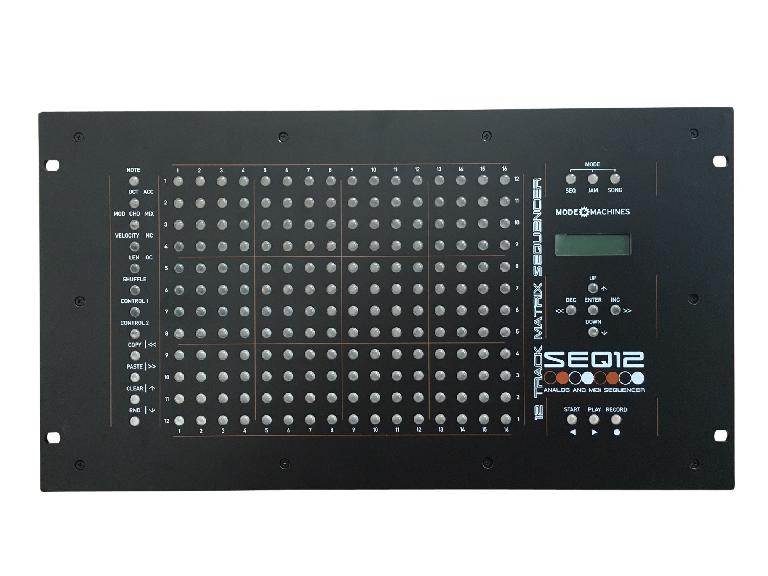 While the term step sequencing can conjure up mesmerising musical images of repetitive note patterns pioneered and popularised by the likes of Germany’s homegrown Kraftwerk and Tangerine Dream in their heyday — the likes of which the SEQ12 ANALOG AND MIDI SEQUENCER of course can capably emulate, even down to the latter’s ‘trademark’ ratchet effect (of outputting multiple triggers per step) but bettered by enabling easy creation of rolls, flams, and comparable complex rhythmical functions courtesy of six selectable trigger patterns and a note value to adjust the length of the trigger pattern, there is so much more to this truly tactile step sequencer than might meet the (untrained) eye... eye-catching as all of those 192 flashy (red) backlit LED buttons already are! 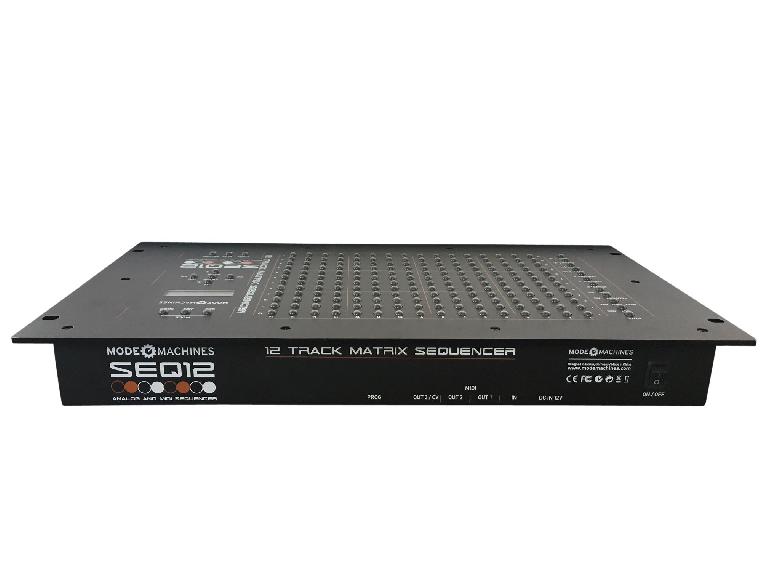 Although the SEQ12 ANALOG AND MIDI SEQUENCER is at heart a pattern-based step sequencer that generates MIDI data, multiple modes make it stand out from the sound of the (step sequencing) crowd — to partially paraphrase the early-Eighties British breakthrough hit from synth-pop pioneers The Human League, no strangers to the lure of spellbinding step sequencing themselves.

The self-explanatory SEQ mode is used to program a sequence — the smallest ‘unit’ within the SEQ12 ANALOG AND MIDI SEQUENCER (containing up to 16 steps) — using the matrix or an external MIDI input device, such as a master keyboard controller connected via the single MIDI IN (input). 16 sequences per track can be stored with parameter values such as velocity, controllers, or step length displayed as backlit LED (button) bars in the matrix.

Meanwhile, JAM mode makes live performance pleasurable and also inspirational with the SEQ12 ANALOG AND MIDI SEQUENCER. This time the matrix displays 12 tracks with 16 sequences each, all of which are freely switchable on the fly for immediate playback while the function buttons to the left of the matrix mute and activate the corresponding 12 tracks. And assuming that the tracks are tasked with handling different musical parts — playing a melody with track 1, a bass line with track 2, chords with track 3, and drums with track 4, for example — then it is perfectly possible to create a song on the fly. Flexibility further abounds since switching from JAM mode to SEQ mode only involves a couple of (almost instant) clicks; once there, users can, likewise, edit the selected sequences on the fly.

Finally, SONG mode is where the SEQ12 ANALOG AND MIDI SEQUENCER sings for its supper, so-to-speak, allowing for the creation and playback of longer and more complex arrangements or even full songs. Each track is allocated an individual series of up to 64 sequences (or sequence chains in ‘SEQ12- speak’). Still better, there are 12 sequence chains — one for each track; these combine to create a part, with the SEQ12 ANALOG AND MIDI SEQUENCER storing up to eight parts. Parts can also be changed on the fly while the sequencer is running, so, given that those parts could effectively equal song parts, users could choose from, say, an intro, verse, bridge, chorus, or outro, each of which could be called up to be played anytime. 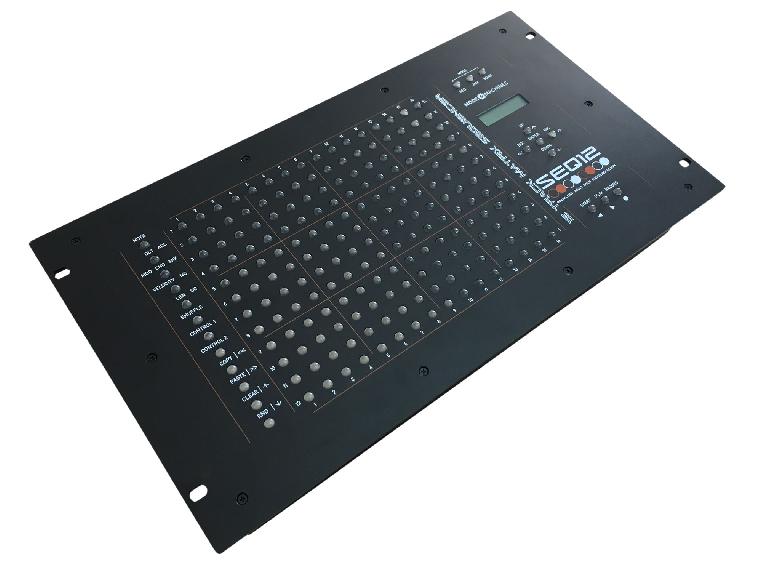 All data that can be changed by the user — namely, sequences, parts, and sequence chains, as well as global settings (with further visual guidance coming courtesy of an informative backlit LCD working in conjunction with various clearly labelled control functions) — is stored as a setup. The SEQ12 ANALOG AND MIDI SEQUENCER stores up to 32 setups. So it is ready and willing to be put through its interactive musical paces onstage or in the studio, thanks to its robust rack-mountable (19-inch/6 HE) design that also includes rubber feet for non-slip tabletop usage.

Ultimately, then, the truly tactile SEQ12 ANALOG AND MIDI SEQUENCER surely ranks as an ultimate pattern-based step sequencer, limited only by its user’s imagination rather than ‘traditional’ step sequencing’s limited note pattern repetition. Reach out and touch... as Depeche Mode sang on their way to sequencer-driven superstardom!

Dream It. Do It.
Do you want to learn Radical Drum Design?
Yes, I want to learn!
No Thanks, I just want to read the article.
Feedback
How are we doing?
We'd love your thoughts, feedback and questions regarding our new site. All feedback is appreciated!
We do not respond to this form! If you need support, please visit our support page.
Thank you for your input!
Your message has been successfully sent
Course Advisor
Don't Know Where To Start?
Ask A Course Advisor