OLSZTYN, POLAND: famed for bringing new technologies to creative musicians by building innovative and unique musical instruments, Polyend is proud to announce availability of Tracker — effectively extracting the best bits of yesteryear’s tricky tracker software classics and rebooting them with forward-looking functionality as the world’s first hardware tracker, deftly designed as an easy-to-use compact standalone workstation with immediacy and simplicity at its creative core, and aiding artists with forging unique avenues of sonic construction to boot — as of March 18…

For the benefit of the uninitiated, a music tracker — tracker, for short — is a type of sequencing software. Speaking historically, the tracker term itself is derived from the first tracker software, Ultimate Soundtracker, starting life as a game sound development tool released for the Commodore Amiga personal computer back in 1987. The first trackers supported four pitch and volume modulated channels of 8-bit PCM (Pulse Code Modulation) samples, a limitation imposed by the Amiga’s audio chipset. Classic trackers represented music as discrete notes positioned in individual channels at discrete positions on a vertical timeline with a number-based user interface. Indeed, notes, parameter changes, effects, and other commands were entered via computer keyboard into a grid of fixed time slots as codes comprising letters, numbers, and hexadecimal digits — the latter being a positional system representing numbers using 16 distinct symbols. Saying that, those in the know appreciated the immediacy and simplicity of classic tracker software, if not necessarily those hexadecimal digits! One thing’s for sure, though: tracker software has exerted its influence on modern electronic music with influential IDM (Intelligent Dance Music) artists like (Aphex Twin alias) AFX, (Polish-American) Bogdan RaczyÅ„ski, Brothomstates (a.k.a. Lassi Nikk, Finnish composer), Machinedrum (a.k.a. Travis Stewart, American electronic music producer), and Venetian Snares (a.k.a. Aaron Funk, Canadian electronic musician), to namecheck but several so-called ‘demo scene’ movers and shakers skilfully orbiting around those tricky trackers. That said, some might say that trackers need not be so tricky in this day and age. And it is this thinking that led to Polyend’s trailblazing Tracker. 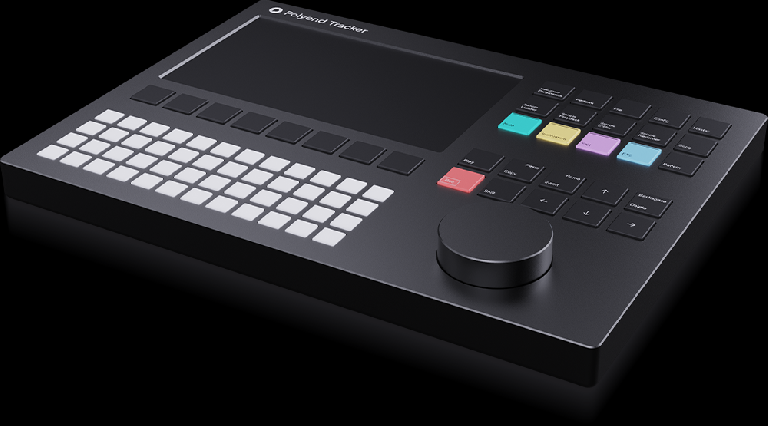 The timely arrival of the aptly-named Tracker puts Polyend in pole position for blazing a new trail, tooled to take the tracker concept to a new level of innovative, inspirational, and immediate music-making by effectively extracting the best bits of yesteryear’s tricky tracker software classics and rebooting them with forward-looking functionality as the world’s first hardware tracker. Thankfully, Tracker waves goodbye to hexadecimal hysterics — not only did those entering the brave new world of classic trackers not necessarily know what those values actually represented, they could not see what was affected by them. Thinking inside its beautifully-engineered box, Tracker instead implements a simplified system of readable decimals that also shows the effects parameters when those decimals are entered in a frenzied fast track to creativity.

Tracker takes the quintessential characteristics of a classic tracker — the vertical timeline, powerful sequencer, and mechanical keyboard — and cleverly combines them with a newly-designed input interface, divided into several sections: a (high resolution, crisp, and bright) big screen and associated screen keys — mechanical controls that always correspond to what is displayed on the screen directly above them; the grid — featuring 48 backlit multifunctional silicon pads for quick note and pattern value entry and visual feedback (while also acting as a highly-customisable keyboard controller with editable scales); function keys — for fast and responsive control over all functions and options; plus navigation keys and associated (metal-manufactured) jog-wheel (with haptic feedback for fast scrolling or precise adjustments) — for facilitating transport control alongside arrow keys for navigation control, as well as dedicated Insert, Copy/Paste, Delete/Backspace, and Shift keys. All are at hand, helping to streamline making and performing music in a new and innovative way — without having to leave the world’s first hardware tracker, deftly designed as an easy-to-use compact standalone workstation with immediacy and simplicity at its creative core, and aiding artists with forging unique avenues of sonic construction to boot.

Better still, the classic tracker look of that dominating (default) screen — showing (up to) 48 instruments and 256 patterns with a maximum of 128 steps per pattern per project — belies an infinite source of inspiration. Indeed, Tracker comes complete with a wide variety of onboard sound design tools to enhance creativity still further for those wishing to take it to the limit. Let loose with Instrument — a chain of tools (Volume, Tuning, Panning, Filters, Reverb Send, and ADSRs) to make an instrument from any sample; Sampler — choose from different (1-shot, Forward, Backward, and Ping-Pong) play modes; Slicer — slice samples manually, or let Tracker take care of it ‘automagically’ at any time; Wavetable — full-blown wavetable synthesis with variable table length to make it compatible with the most popular (Ableton Wave and Serum) standards; Granular — single grain yet very powerful granular synthesis to create crazy and futuristic sounds from old and boring samples; Sample Editor — built-in precise offline rendering sample editor with multiple effects; and Sample Recorder — records up to two minutes of 16-bit/44.1kHz samples using built-in Radio, Pattern selection, Mic or Line In inputs, all of which can be saved to the included (16GB) MicroSD card for later use or loaded directly into a project. Put it this way: with Tracker, users can quickly and easily use existing sample libraries, record new ones, or use the built-in FM (Frequency Modulation) radio. Record samples, play them, slice them, mash them, or even make a synth out of them!

Tracker also plays nicely with other instruments. Thanks to its bidirectional MIDI (Musical Instrument Digital Interface) implementation, it can be used to sequence and control external gear or be controlled as a sound module by any external MIDI software or hardware devices. Whatever way anyone chooses to use it, armed as it is with an impressive arsenal of sonic weaponry — including automatic filling, randomiser, probability, selection rendering, effects per step, live recording, batch parameter editing, micro-tuning, micro-timing, rolls, and much more besides — it has what it takes to be a surefire hit, harbouring endless creativity. Compatibility with MOD files — a computer file format primarily used to represent music, made up of a set of instruments (in the form of samples), a number of patterns (indicating how and when the samples are to be played), and a list of what patterns to play in what order — allows users to import and finish tracks from way back when or export and finish their Tracker creations in modern-day software trackers.

The world’s first hardware tracker is slick, light, and portable. It is also energy efficient, so will work with any USB (Universal Serial Bus) power source. Sturdy and compact, the retro form factor of software past with forward-looking functionality makes for a great music creation companion — in the studio, on the run, or on stage. Simply put, Polyend’s Tracker puts everything right on track as a ‘back to the roots’ experience like no other!

Dream It. Do It.
Do you want to learn A close look at the hardware MIDI Step Sequencer, SEQ!?
Yes, I want to learn!
No Thanks, I just want to read the article.
Feedback
How are we doing?
We'd love your thoughts, feedback and questions regarding our new site. All feedback is appreciated!
We do not respond to this form! If you need support, please visit our support page.
Thank you for your input!
Your message has been successfully sent
Course Advisor
Don't Know Where To Start?
Ask A Course Advisor